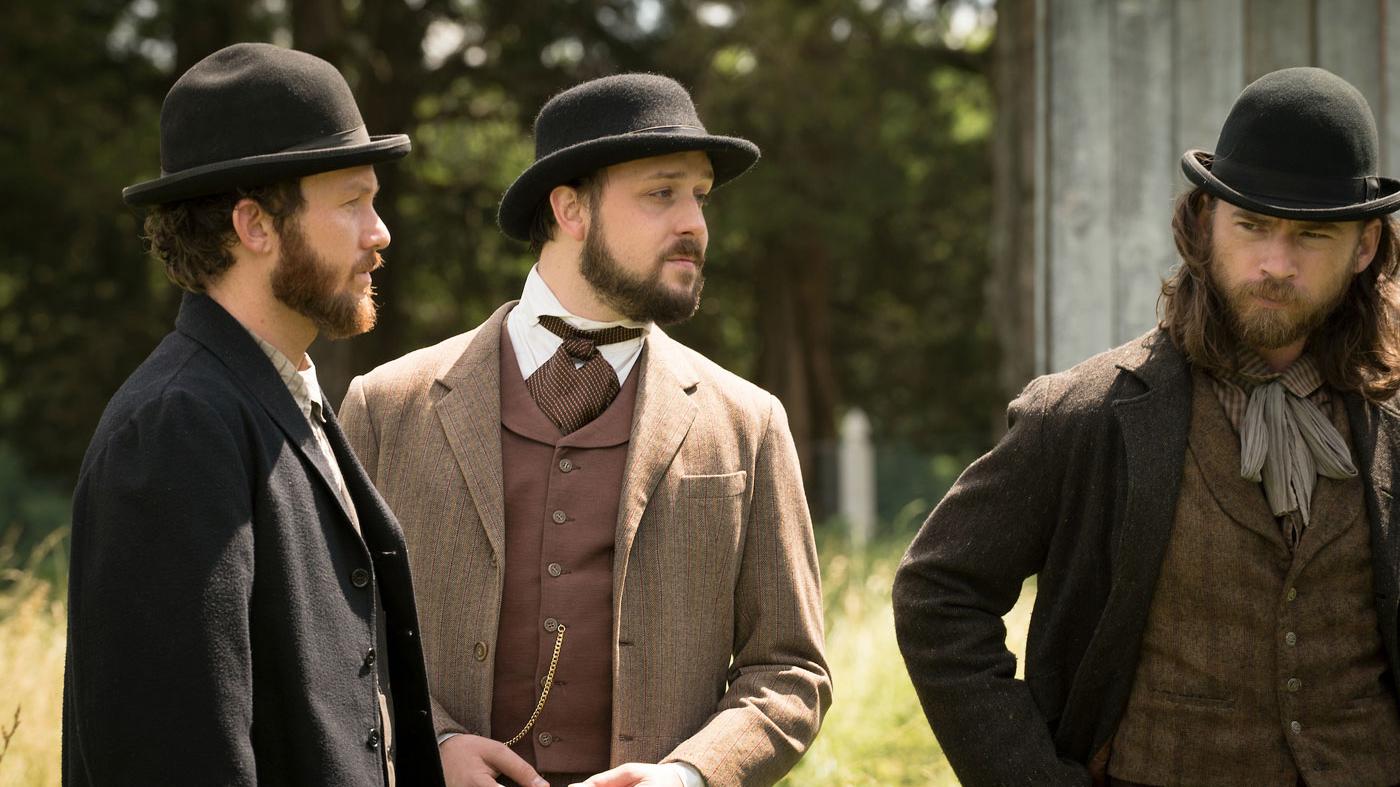 Jimmy Green has a violent plan based on lies and theft. Photo: PBS/Erik Heinila

Mercy Street keeps upping the ante. It’s hard to imagine what dramatic heights the finale will reach. The previous three episodes have successively topped each other by deepening conflicts, enriching relationships, fleshing out secondary characters, and presenting more and more desperate patients.

The latest victim brought to the hospital is in dire condition. His breath comes in gurgling sputters, his face is shiny with burns and maimed by scars that are barely pinched shut by vivid black sutures, and he has no idea who he is or even what side he was on. This is not for the squeamish: the camera lingers on his grotesque face in silent protest against the horrors of war.

A British envoy staying with the Greens yearns to gape at such horrors, and the immediate juxtaposition of a devastated man with the voyeuristic delight of an aristocrat provides a theme for the episode: there are those who enjoy the suffering of others – for their own profit, advancement, or simple entertainment – and those who attempt to alleviate it. 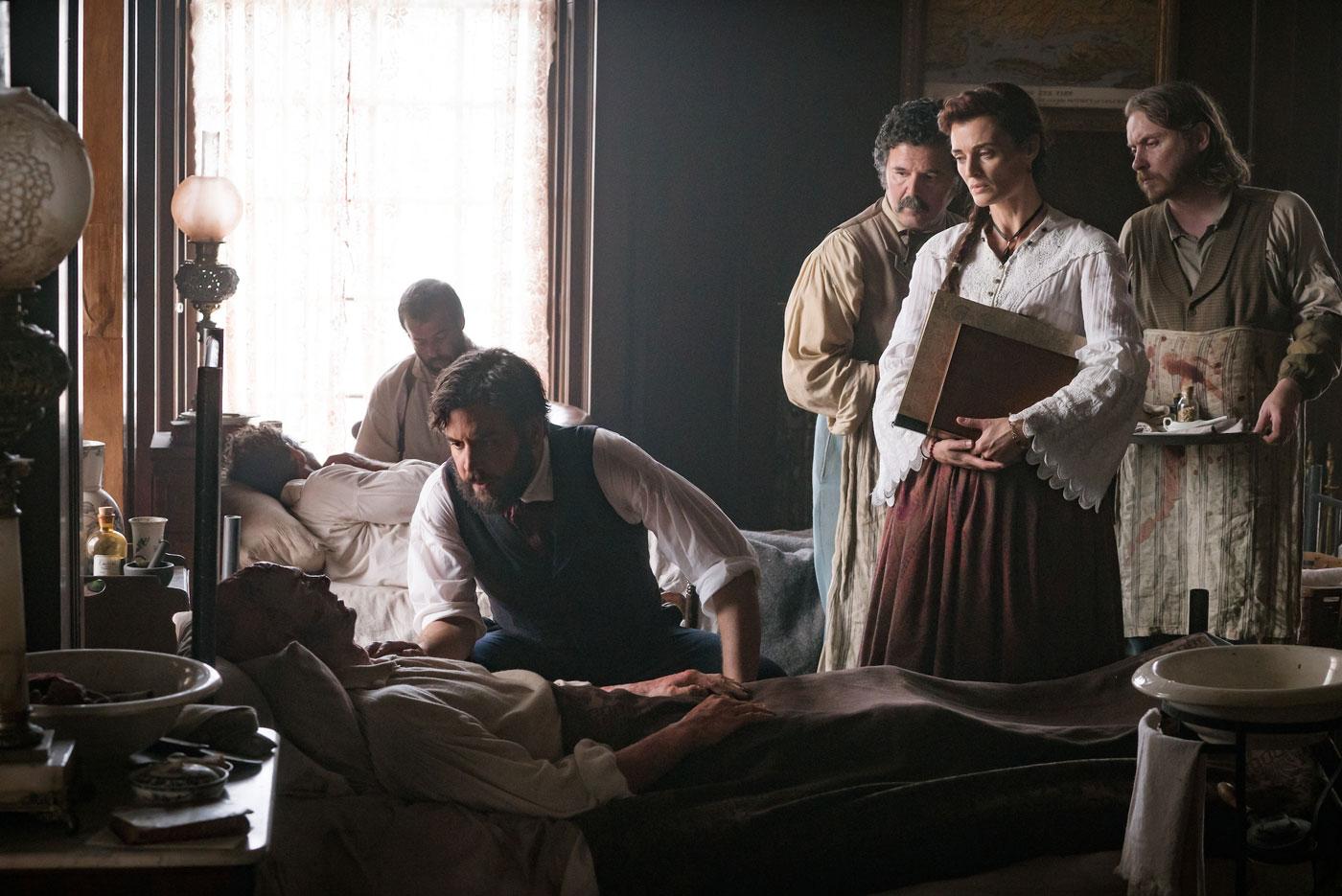 Jed and Lisette both work to help a horribly maimed soldier, while also grappling with their own relationship to each other. (Courtesy of PBS/Erik Heinila) McBurney falls in the former category. He has ordered the closure of Charlotte’s school for Contrabands, fearing she would incite rebellion. But he truly shows his vain selfishness interacting with Hale and Samuel. Word of the publication of the pair’s medical discovery has reached McBurney. The presence of Samuel’s name on the article, especially adorned with “Doctor,” is a disgrace to Mansion House, in his view.

Hale indulges in his own egotism and invents a story that grants him all the glory, painting Samuel as clueless and dumb. Worse, he begs Samuel to corroborate the tale, arguing that it's better Samuel that take the blame, for Hale has “much farther to fall.” To his credit, Hale repents this myopic cruelty when he, Samuel, and Jed are called to McBurney’s office, and Samuel lies for him. He admits that Samuel deserves the true credit, then Jed jumps in with his own fabrication: he forged the papers, because Samuel has been admitted to medical school and Jed was attempting to bring glory to both Samuel and McBurney – the training of an African American doctor at Mansion House would be a great commendation.

Samuel keenly recognizes that McBurney is a slave to his own pride, and demands that he reopen the Contraband school – just for the sake of McBurney's own heroic reputation, of course. McBurney acquiesces, but only because he anticipates gain for himself.

Jed now pledges to find a school that will accept Samuel. He will also accompany Samuel to said school, for he already has a journey out of Alexandria planned, to bring a prosthetic leg to his amputee brother – a leg which Samuel ingeniously designed and built.

McBurney further demonstrates his casual maliciousness when Hale lingers in his office to learn the results of his medical exam. He aced it, but McBurney laces that good news with poison: Hale will be sent away anyway – to California, the end of the earth – because McBurney doesn’t like him. 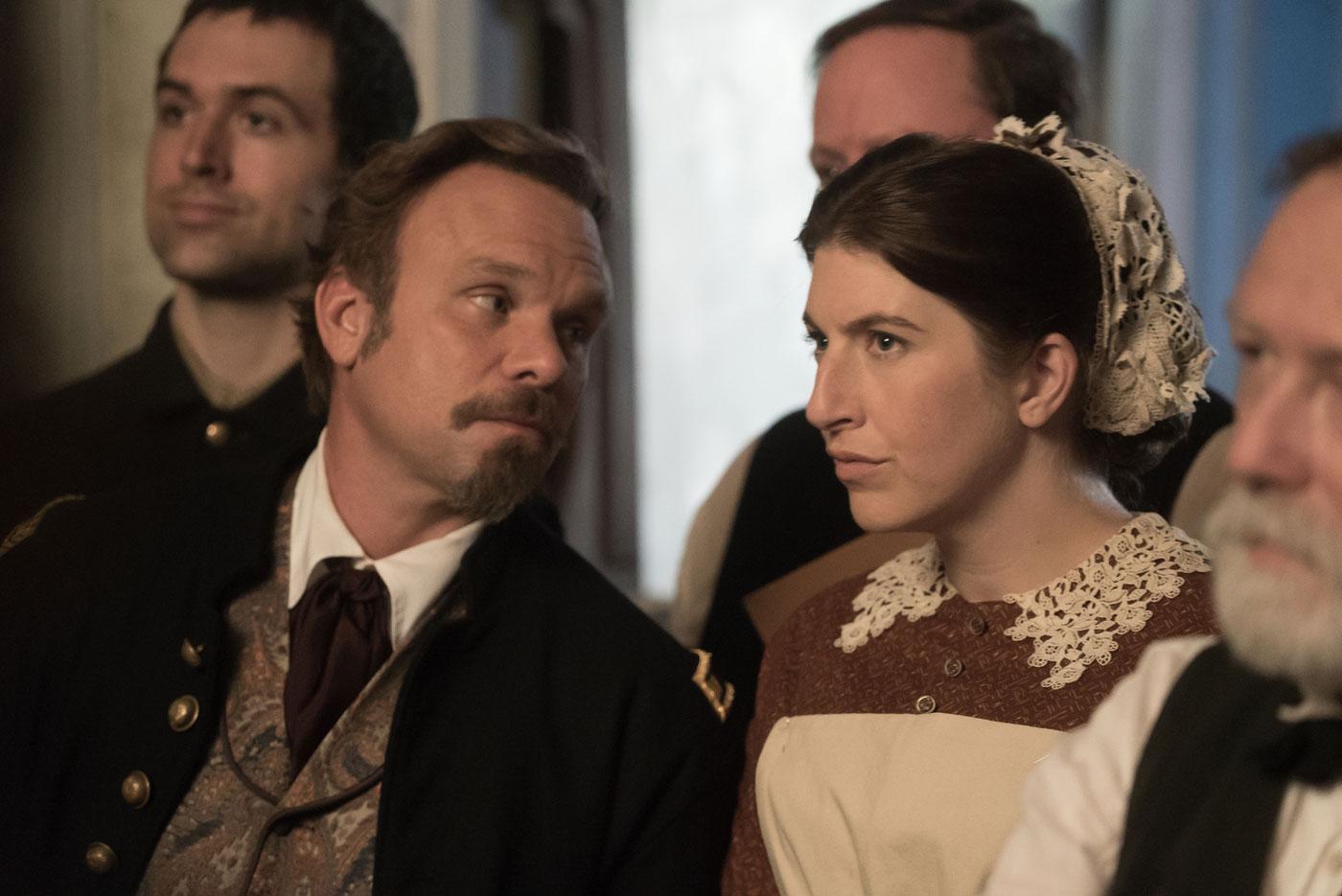 Hale and Hastings reunite to scheme against McBurney. (Courtesy of PBS/Erik Heinila) Luckily for Hale, he reunites with his old accomplice, when Hastings loses her chance to remain head nurse after an acquaintance of McBurney arrives with a smashed toe and is placed in her care. By a stroke of bad luck, he never wakes after Hastings administers chloroform in preparation for surgery. McBurney accuses her of willful negligence. In their mutual distress, Hale and Hastings join forces to oust McBurney.

Hastings did not witness her chloroformed patient slip from life because she and all other women were kicked out of the surgery room by an irritable Jed while he operated on the unknown, burned soldier. He issued the sexist directive because he was flustered by the presence of Lisette, who was sketching the patient in an attempt to reconstruct the appearance of his face.

With Mary gone, Jed and Lisette are striving to understand their feelings towards each other. When Jed admits that Lisette’s perfume still stirs desire within him, the two almost rekindle their relationship. But soon her sketch leads to an identification of the disfigured man: he is not a soldier but the Quaker who housed Frank and Alice. Despite being a pacifist civilian, he braved the battle in which he received his horrific injuries to bring water to desperate soldiers. This story ennobles Lisette and she decides that she should not complicate the love between Jed and Mary. She does propose one last night together – no one is perfect – but Jed gracefully refuses out of loyalty to Mary. 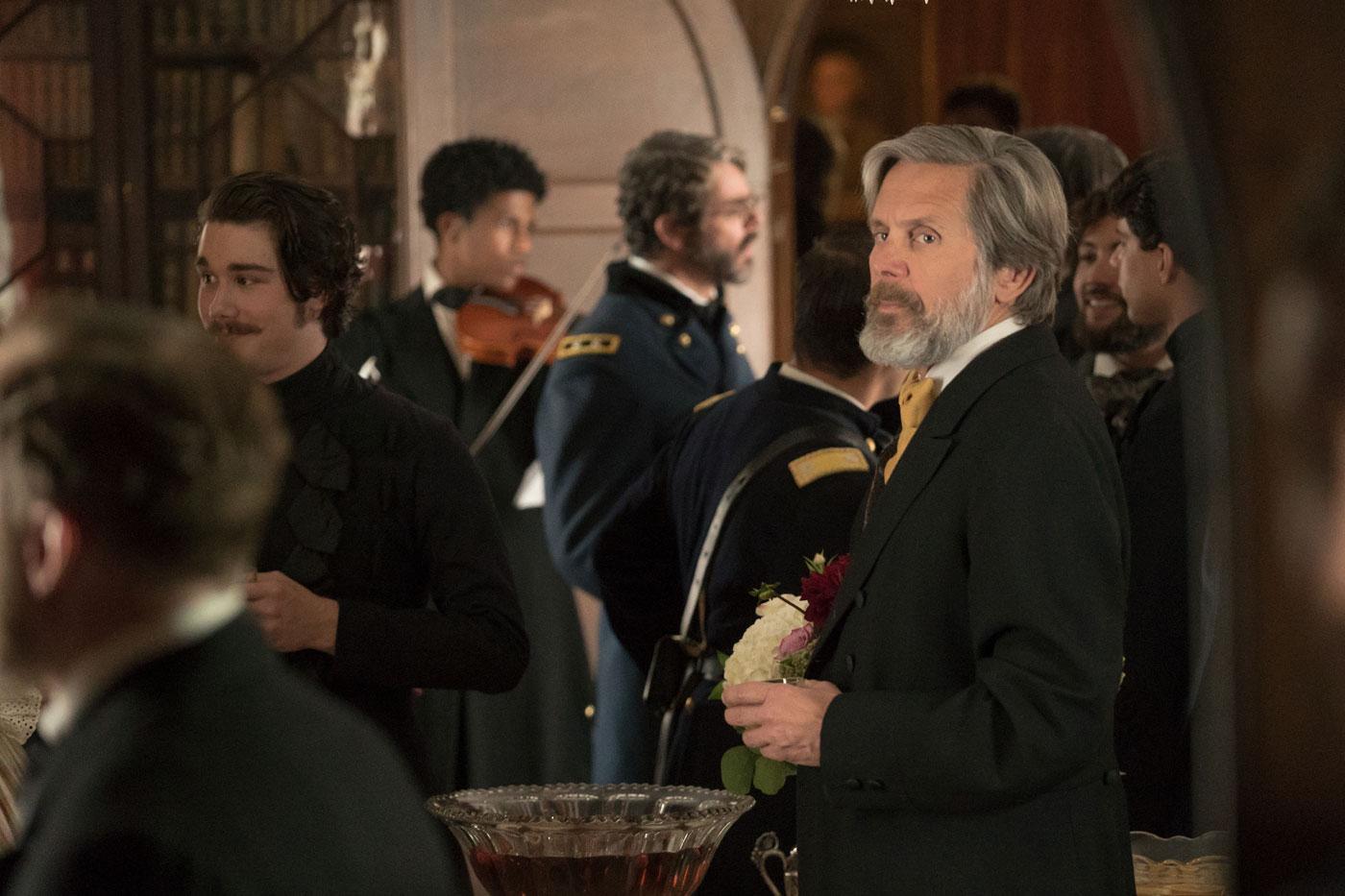 James attempts to negotiate an alliance between the British and Confederacy. (Courtesy of PBS/Erik Heinila) On an altruistic scale from the selfless Quaker to the egomaniacal McBurney, James Green falls somewhere in the middle. He plans to propose a trade alliance with the Confederacy to the British, thus restoring the Green family name, at a reception in Washington that he will attend with the voyeuristic British envoy. When he is frustrated in his attempts to speak with a minister, Alice flirts her way into a conversation, allowing James to successfully pitch his scheme. Although he is supporting the South, he still views the North as his “estranged brethren,” and hopes for reconciliation and the gradual abolition of slavery.

Jimmy is less interested in peaceful reunification. He and the two Confederate henchmen pay cash up front to buy an automatic weapon meant for the Union, and make plans to amass an arsenal. Where did the cash come from? When the entire Green family congregates in their Alexandria home to be questioned by Pinkerton, that secret and other deceptions are revealed. Both Jimmy and Emma stole money from their father, he for the gun and she for wagons to help wounded soldiers. Emma learns of the covered-up murder of Captain van der Berg. Jimmy insults James. James is furious at everyone for keeping secrets, Alice and Jimmy suspect Emma is a Union loyalist, and the family accuses Belinda, the one blameless person, of various crimes actually committed by other Greens.

As the family splinters into distrust and loathing, Belinda stands up for herself and quits, leaving the Greens to their own destruction – which will be aided by Pinkerton, who is almost certain that they murdered van der Berg. 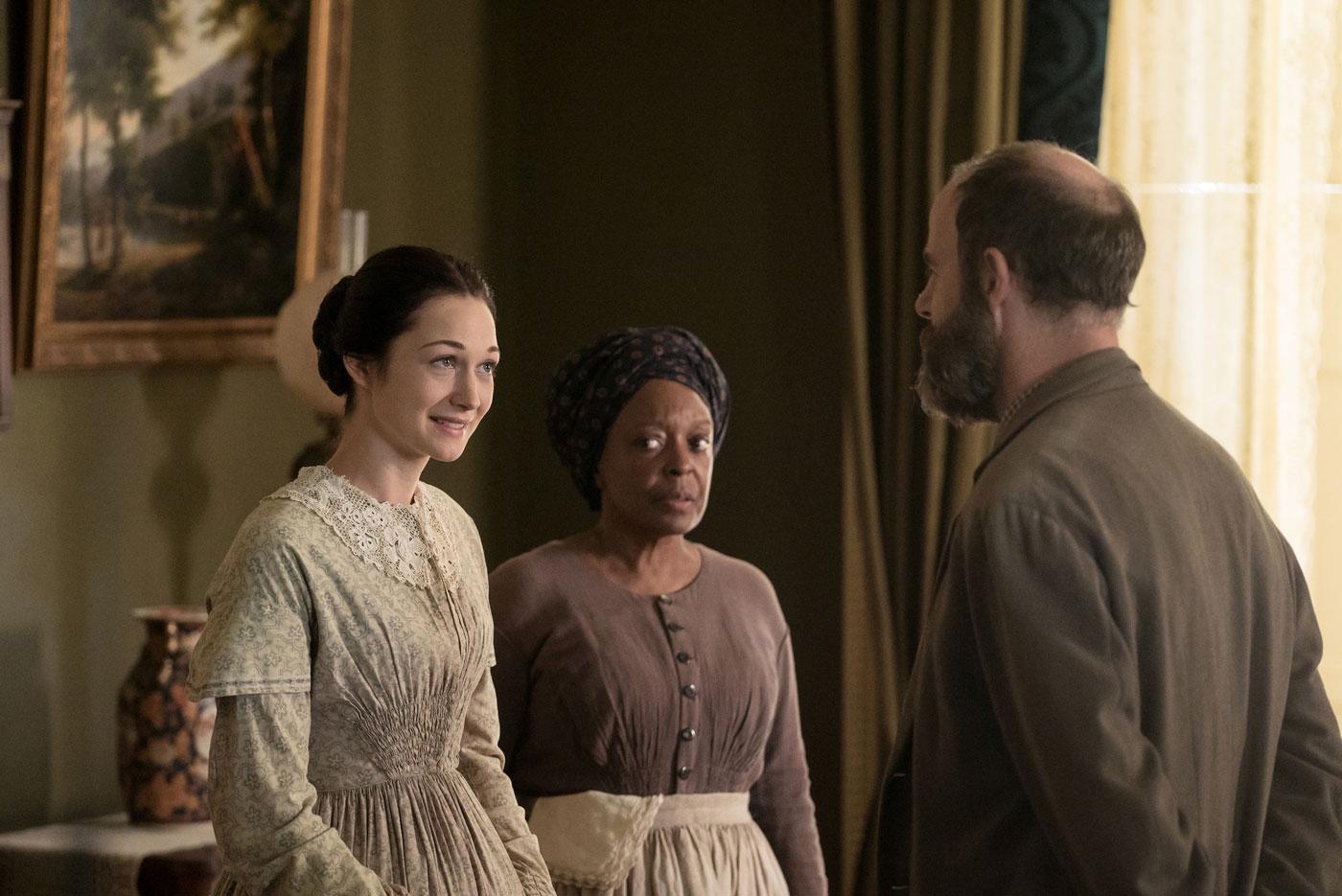 Pinkerton is closing in on the Greens, but they don't need his help to ruin their family. Emma and Belinda are done with their lies. (Courtesy of PBS/Erik Heinila) In the wake of the family soap opera, Emma moves into the hospital permanently: “This is where I belong,” she says. Unfortunately, that also puts her into close proximity with the chaplain, whom she finally confronts about his avoidance of her. Horrified by the murder he committed, he blames it on his “weakness” for Emma, and she is rightly incensed that he views her as a liability.

Whereas the chaplain grievously mishandles a difficult conversation, Hastings of all people acts selflessly in a separate emotional exchange. When the matron asks her to read a letter from Declan’s commanding officer – never a good sign – she makes up a hero’s death for him. The matron sees through the story, but Hastings has demonstrated a new sensitivity to the pain of others. With all the profiteers (Bullen has reverted to his thieving ways), egotists, and just plain indifferent people in this war, a little compassion goes a long way.