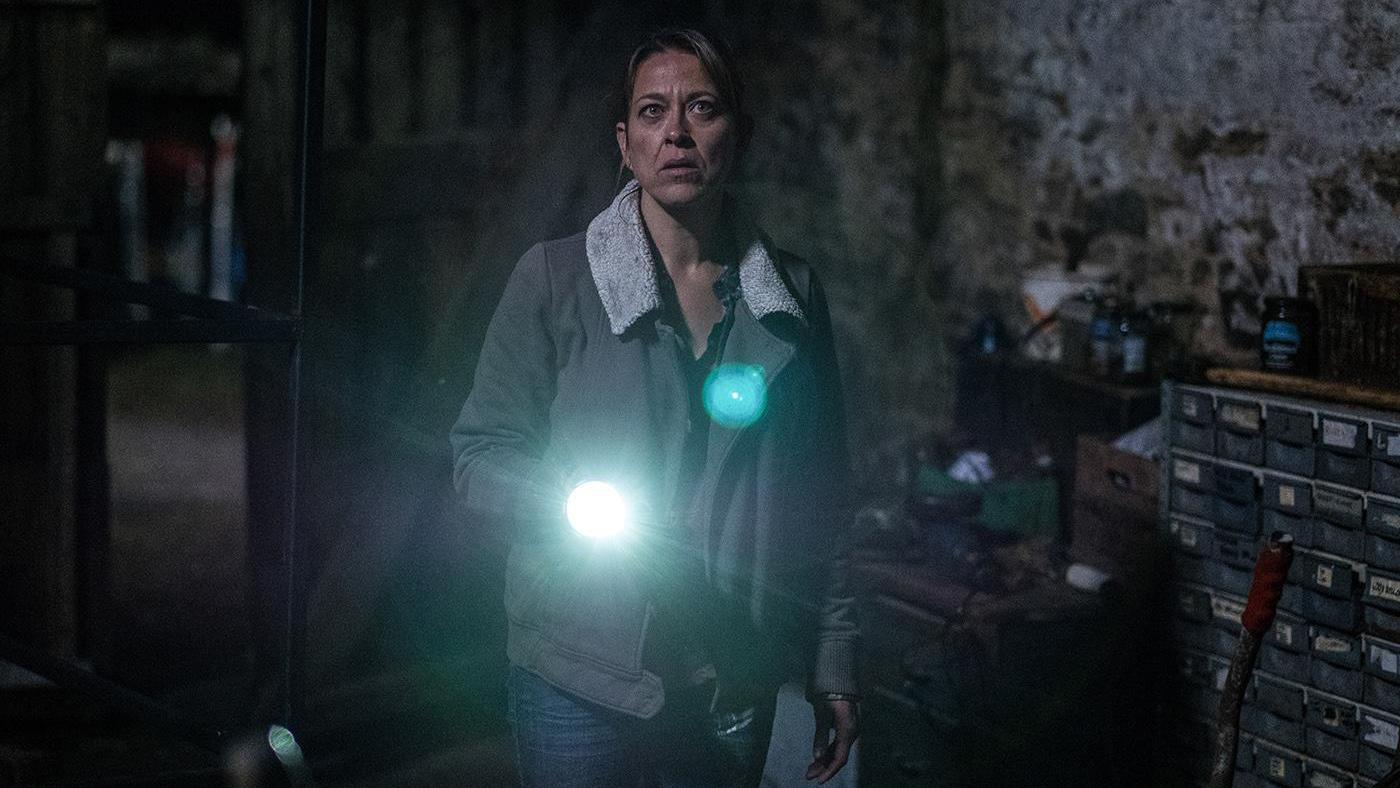 Gillian fears Eddie's spirit lingers in the barn – and it's not pleased about her marriage to Robbie. Photo: BBC/Red Productions/Matt Squire

It may be the holidays, but it seems that Halloween is sticking around up in Halifax. Ghosts of all sorts – murderous, loving, angry, theatrical – lurk in the stone cottages and barns of Yorkshire, haunting Alan and Celia, Gillian and Caroline, as they persevere through their complicated, messy lives.

Unbeknownst to anyone, Caroline has applied for and accepted a position at a different school; she announces to Celia that she is selling her house to move closer to the new job, way out in Huddersfield. Celia and Alan will have to move with her, stay with Gillian and Robbie at the farm, or – fingers crossed – buy their own place. They choose to stick with her.

The new school is a bit grimmer than Caroline is used to: “That’s where that science teacher got stabbed last year,” exclaims Raff. He shrugs. “He pulled through.” Caroline explains to her latest paramour, Olga, that she needed a challenge – as if her life weren’t already complicated enough, what with being a single mother of an infant and having to share a house with her mother and stepfather.

Moving into a new house doesn’t make things any easier. Lawrence is sore that Caroline relocated so far away: now he has to live with his father and Judith, an arrangement with which no one is happy. Celia complains that the new house is damp and might have vermin, despite having approved it before the move. And Caroline also has to take care of her baby, Flora, during the chaos of moving in, because the girlfriend of Greg, Flora’s biological father, doesn’t like children, so he can only watch the girl for short periods. 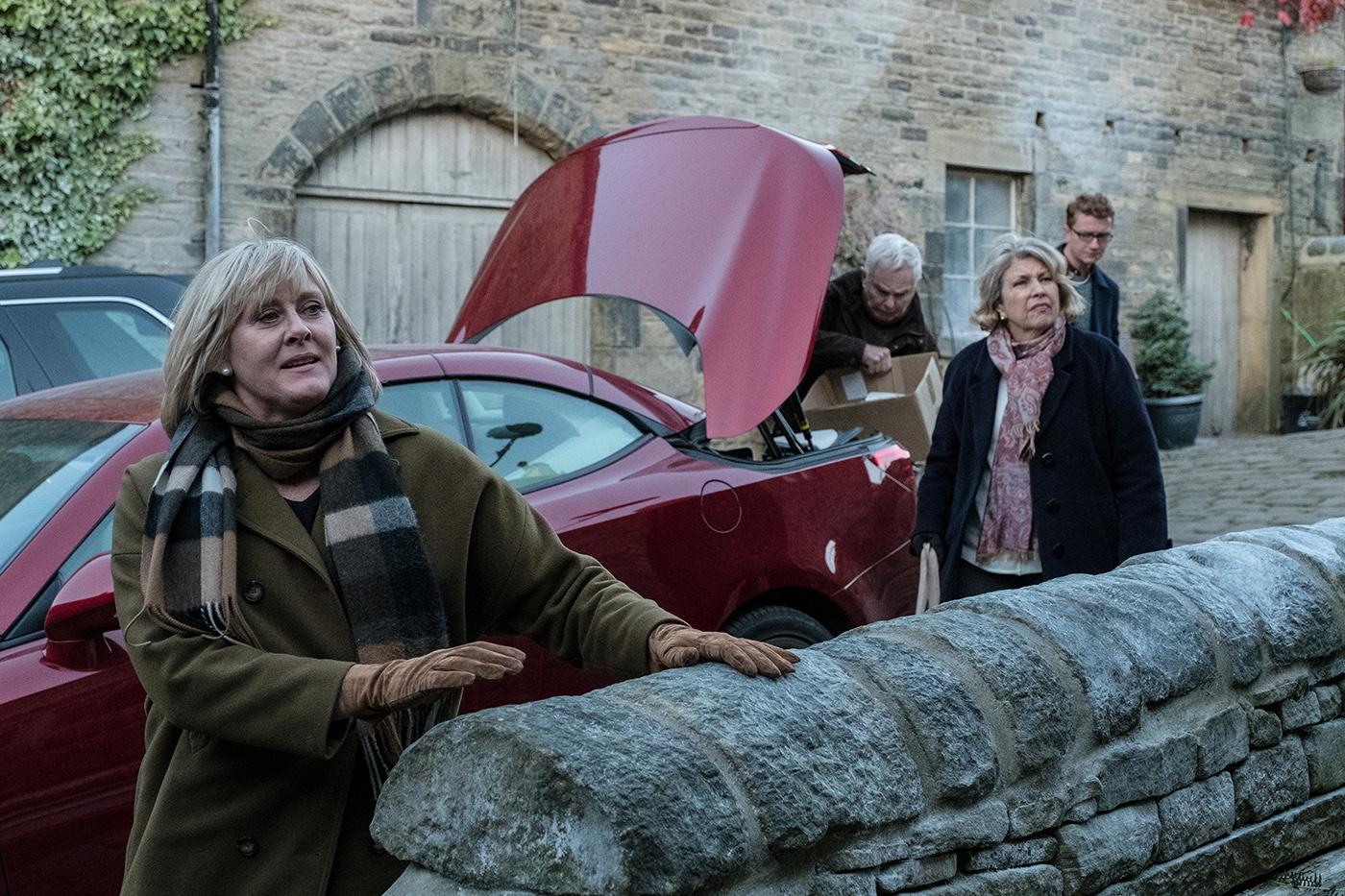 Caroline has a new job and is moving to a new house – with Celia and Alan in tow. Photo: BBC/Red Productions/Matt Squire

Evening comes and Caroline can finally relax as she goes to meet Gillian at the pub, minus grouchy family members. Turns out Gillian is also frustrated with her family and left them behind, so what was supposed to be a large gathering ends up becoming a two-person griping session.

What’s Gillian’s problem? “I’m thinking about becoming a lesbian,” she jokes. She’s still not confident she made the right decision in marrying Robbie, whose recent retirement means he’s always around to annoy her. The next day, she shares her complaints with her father, too. Alan has come to the farm to inform Gillian that he and Celia have updated their wills. All the money of the first person to die will go to the surviving spouse, and when that person dies, everything that’s left will be split evenly between Gillian and Caroline. Oh, and they want their ashes to be buried in the same grave – not with their previous partners.

Gillian now has a new concern, and goes to Robbie in the barn to voice her opinions on the will. He has his back to her and is using heavy machinery that muffles her calls, so she taps him on the back, startling him. He falls onto his back, the saw cutting his neck. Blood gushes. Gillian attempts to stanch the flow, calls an ambulance, and loads Robbie into the car to go meet it. The whole trip to the hospital, she nervously babbles on about her father’s will while Robbie struggles to stay conscious. 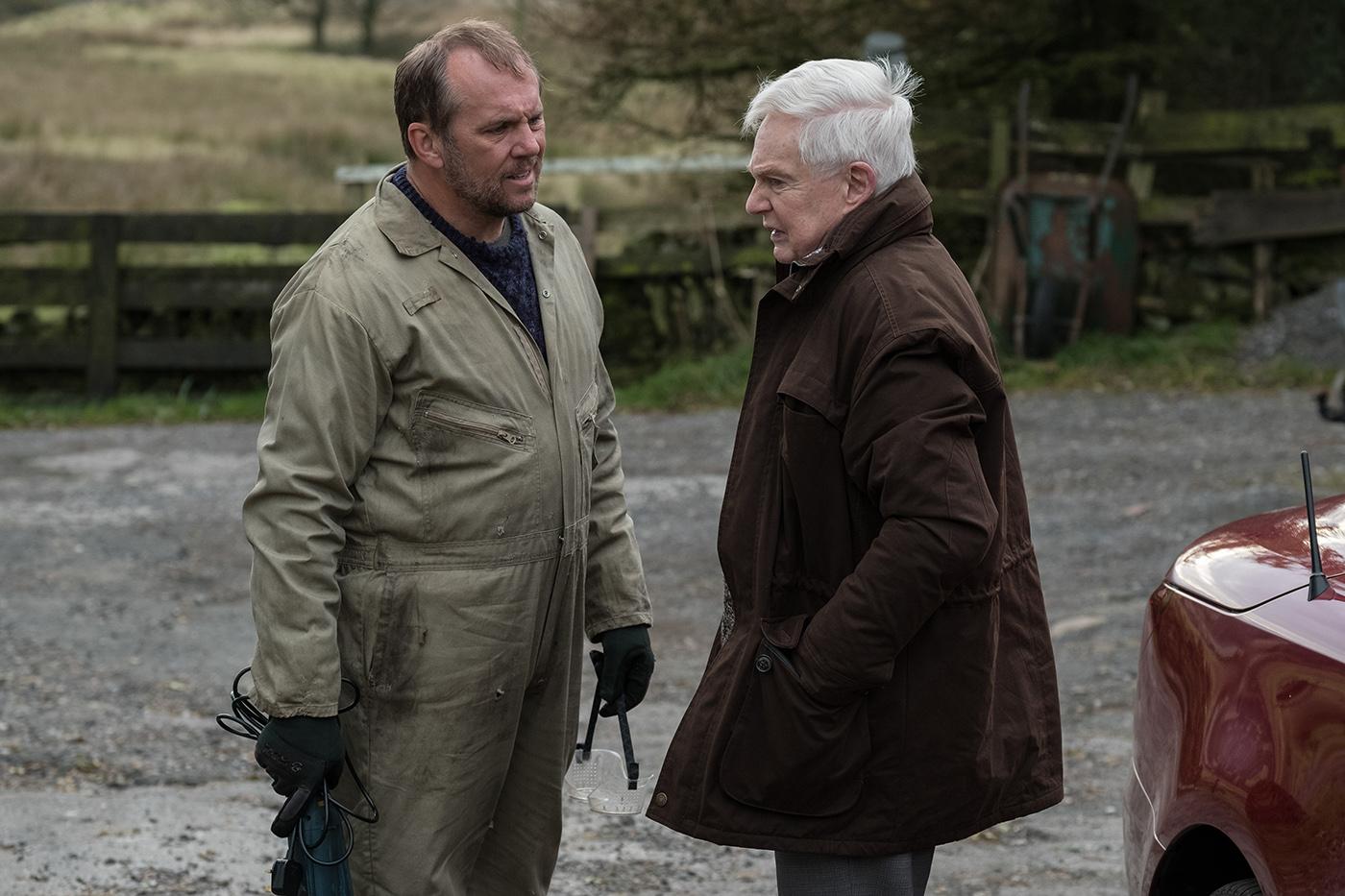 When Alan tells Gillian he has revised his will, she gets flustered and causes an accident with Robbie. Photo: BBC/Red Productions/Matt Squire

Caroline, with Flora, meets Gillian at the hospital. While they wait to see Robbie, who will be fine, Gillian explains why she’s so shaken up. This isn’t the first time Robbie has been accidentally injured in the barn in the months since their marriage. He almost lost a finger and was also clocked in the head by a log, and Gillian believes that her late husband Eddie is behind it all. Perhaps Eddie’s spirit is lurking in the barn, angry that his wife married his brother. Normally Gillian would think she was imagining things, but Alan also feels that there’s something off about the barn: he won’t go in after dark.

Being haunted doesn’t sound all that odd to Caroline. She admits that she still speaks to Kate and often feels her presence. And Celia is also intimate with ghosts – at least while partaking in her new pastime. She’s playing the medium Madame Arcati in a community production of Noël Coward’s Blithe Spirit, having been called up to replace an injured actress a week before opening night. She had earlier auditioned for a different play, thinking that memorizing lines would keep her mind sharp, but now that her chance has come she’s nervous – until Caroline reluctantly encourages her.

Later, rumors of another ghost surface. With everyone gathered at Caroline’s new house during a spectacular thunderstorm, there’s a knock on the door. Both Alan’s friend Harry and Caroline’s on-and-off paramour Olga have arrived. Caroline tries to turn Olga away, but she drops off her house-warming gift and slips into the house, shedding her coat and introducing herself to everyone. 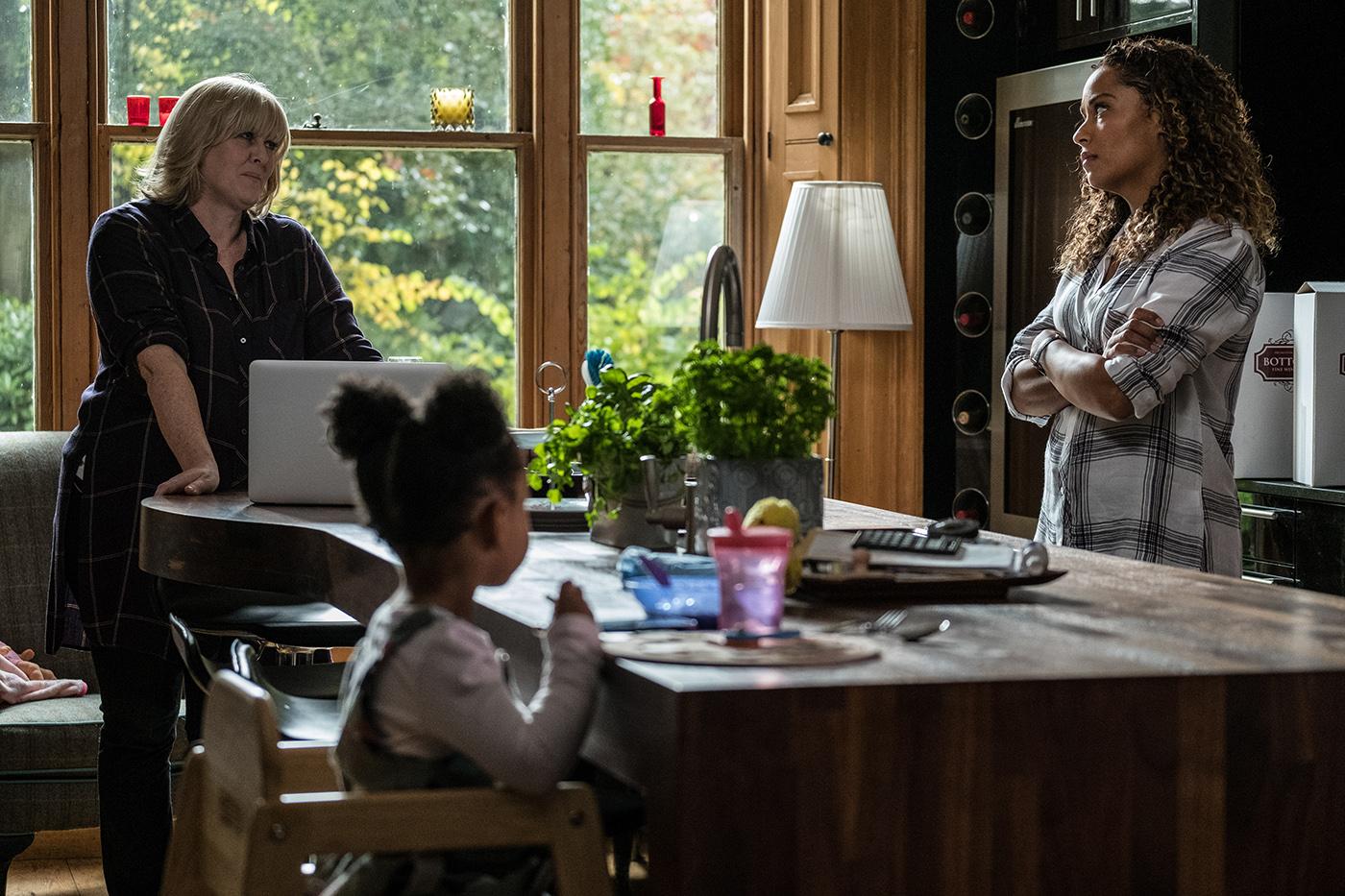 Caroline is unsure whether she wants to be in a relationship with Olga. Photo: BBC/Red Productions/Matt Squire

As lightning flashes, Harry recounts the tale of a vicious 18th-century coin counterfeiter who was hanged and supposedly still haunts the house. It’s said that his bloated face appears in the windows before a death. Flash – the lights go out. William is terrified, but it’s only a power surge.

Having drunk too much, Olga spends the night on Caroline’s couch. She and Caroline awkwardly converse as she leaves – neither knows what their relationship is, as is clear when William asks Caroline about Olga. Perhaps, he suggests, Caroline is behaving rashly – changing jobs, becoming involved with Olga – because she’s still mourning Kate.

Alan is also soon to mourn a loss – of his dignity. A cast member in Blithe Spirit has had a stroke, and Celia offered Alan as a replacement. Not that he’s ever acted before.