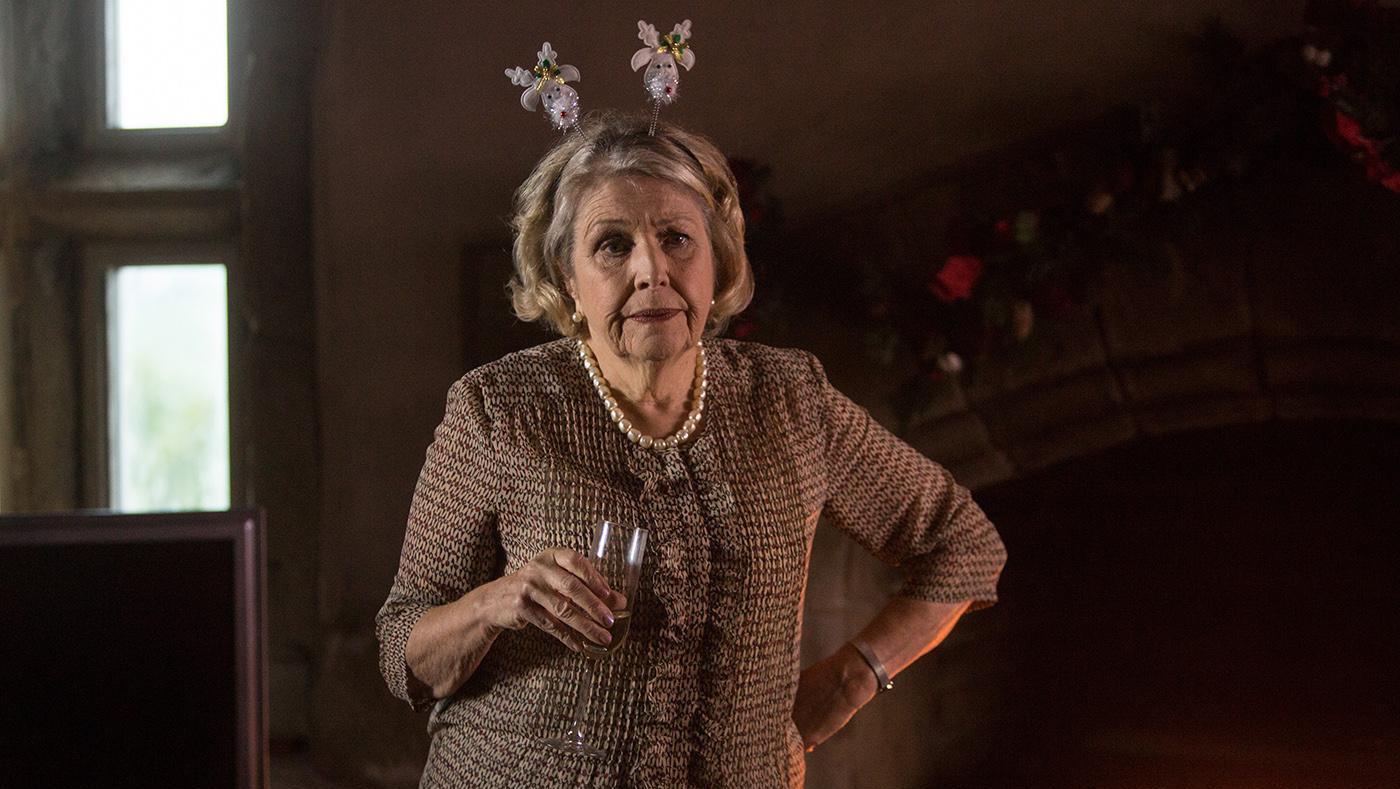 Celia is doing some research for her role as a medium in a play by leading a Ouija board session at Christmas. Photo: BBC/Red Productions/Matt Squire

Recap Part One of the Last Tango in Halifax Holiday Special, and recap the following season.

Christmas is approaching, bringing with it various prospects: humiliation for Alan and glory for Celia with the opening of their play, a new and difficult job for Caroline, and more of the same imperfect marriage for Gillian and Robbie.

As Caroline and Gillian shop for the holiday, Caroline admits that she’s afraid she won’t be up to her new job in a state school. Her doubt may stem in part from the circumstances surrounding her decision to find a new position. She didn’t voluntarily leave her old school, she tells Gillian; instead, it was suggested that she take a permanent sabbatical to cope with the death of her wife Kate, as her work had apparently been affected by her grief.

But that’s not the reason she decided to apply for a position at a challenged state school. That impetus came from her new sort-of-girlfriend Olga. The couple met inauspiciously: Olga rear-ended Caroline, and while they waited for emergency services to arrive – Caroline resignedly, Olga frenetically – they began to talk about Flora and Kate. A few days later, Olga showed up at Caroline’s door with a case of wine as an apology, and, abetted by the alcohol, one thing led to another. 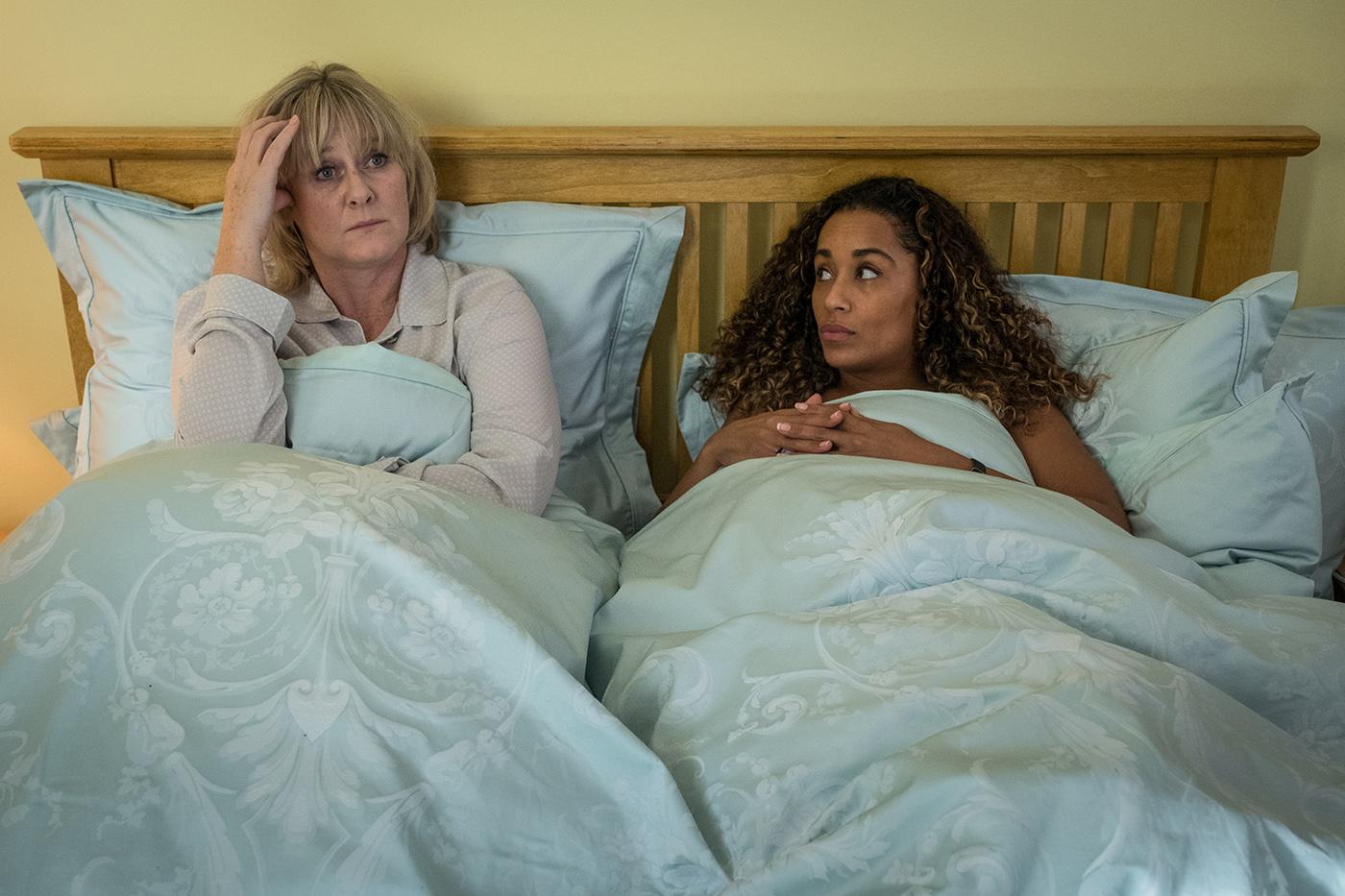 Caroline did not expect to end up with someone like Olga. But Olga has a strong influence on her. Photo: BBC/Red Productions/Matt Squire

Olga is not someone Caroline expected herself to end up with. She’s reckless and given to brashness – she admits that she was texting her ex-girlfriend when she hit Caroline – while Caroline feels guilty having slept with anyone in the wake of Kate’s death. But Olga has a powerful influence on Caroline. She tells Caroline she should work at a troubled state school, where someone inspiring like her could make a real difference. Maybe Caroline’s enforced sabbatical was meant to happen so that she could find her true calling (and maybe the car crash was serendipitous, too).

Alan, meanwhile, is cursing his fortune. His memory isn’t up to learning his lines for the play in three days, and he’s even been having nightmares of forgetting them on stage. His friend Harry suggests playing it for laughs, but Alan thinks Harry would do a better job of it. Much to Celia’s displeasure, Harry agrees to take over the part.

Lawrence’s friend Angus has brought a Ouija board to the Christmas celebration at Caroline’s supposedly haunted house, and Celia is chosen to lead the séance – it will be useful research for her role as the medium Madame Arcati. As the session progresses, more and more people are overwhelmed by the eeriness. When Celia asks if the spirit speaking through the board has a name, “Spike” is spelled out. Gillian had a black cat named Spike that was killed in her barn. The coincidence spooks her. 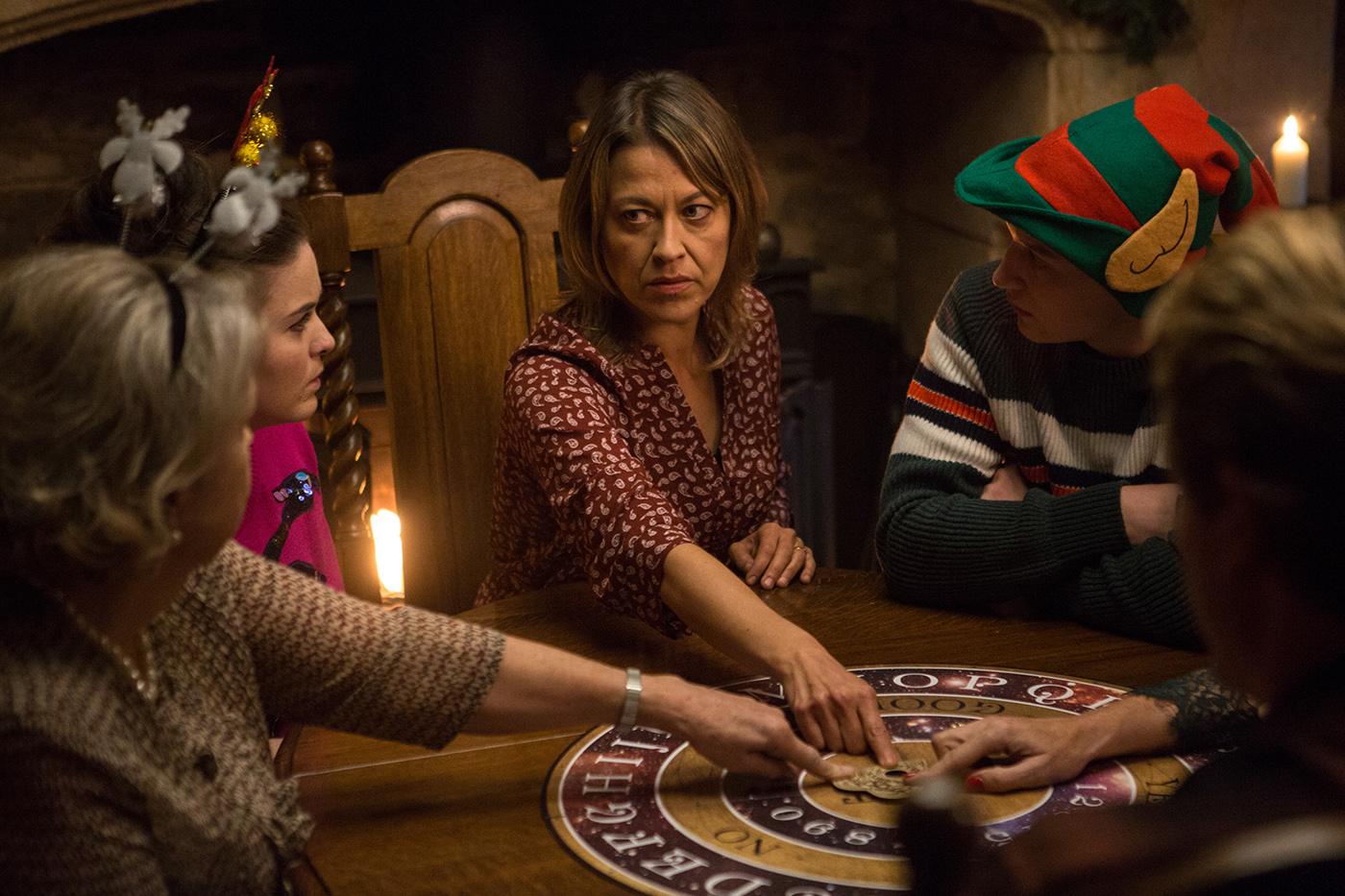 She still believes that Eddie haunts the barn and is trying to kill Robbie in revenge for marrying Gillian. The fact that her granddaughter plays with an imaginary friend in the barn whom she calls Eddie frightens Gillian even more. Unable to sleep one rainy night because of Robbie’s snoring, she stares out the window at the foreboding barn. Robbie wakes and asks why she’s so nervous, and she finally shares her fears about the ghost of Eddie.

While Robbie dismisses her belief, he does say the barn feels odd – but that’s just because it’s where Eddie died. And that gives Gillian an opening to admit the truth about Eddie’s death. She tells Robbie that it wasn’t a suicide or an accident. She was drunk and killed him, to end his abuse. “I can’t be married to you because I killed your brother,” she says. But now she wants peace, so she has to deal with this problem. Robbie has to go; they should never have married; she’d rather die than keep living with this guilt. Shocked, Robbie acquiesces, packs some bags, and leaves.

Gillian and Robbie later meet at a diner to discuss the future. Robbie is going to try to sell his house and travel, maybe leaving Halifax permanently. “I should have married you” instead of Eddie, Gillian tells him sadly. Robbie agrees, and it’s over. 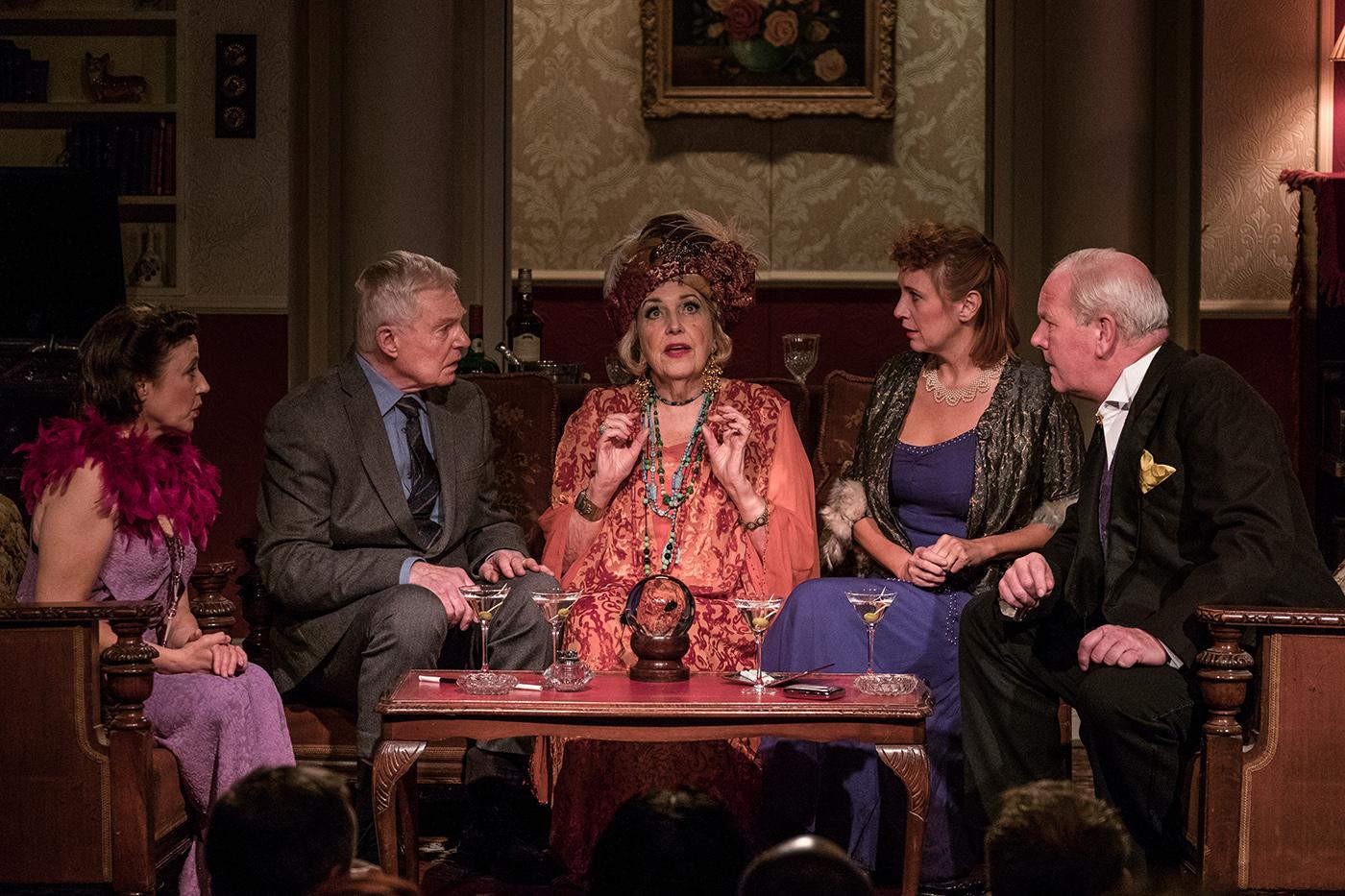 After ceding his role to Harry, Alan is forced by an accident to step onstage anyways and face his fear. Photo: BBC/Red Productions/Matt Squire

Backstage at the premiere of the play, Harry is “pickled.” To buck up his nerves, he’s taken to liquid courage. Just before he’s set to go onstage, he topples over and fractures an arm. Emergency services are called, and an emergency replacement is sent reluctantly on stage: Alan, with script in hand.

Both Gillian and Olga are late to the play and miss their seating. While waiting for an intermission, they grab a bottle of wine and chat outside. When Gillian reveals that Caroline is nervous about her new job, Olga is surprised to hear that Gillian thinks Olga is the reason Caroline chose a tough school. She’s not: the boy who killed Kate in a car accident is. He wrote to Caroline asking to meet her and apologize, and she has visited him regularly ever since. Part of the reason she wanted to go to a state school was to help troubled kids like him. And if Caroline can survive meeting and forgiving him, then she’ll be able to survive her new school.

As Gillian advises Olga to share her confidence with Caroline, they see an ambulance pull up and Harry rushed to it. Hearing from him that Alan is on stage, they rush into the theater, regardless of the usher. The play is a resounding success, and afterwards Olga tells Caroline that she hasn’t made a mistake taking on the new position. Caroline, having shed her fear, and Gillian, having repented of her guilt, are ready to face the new year. And Alan and Celia? They’re already looking for the next play to star in.