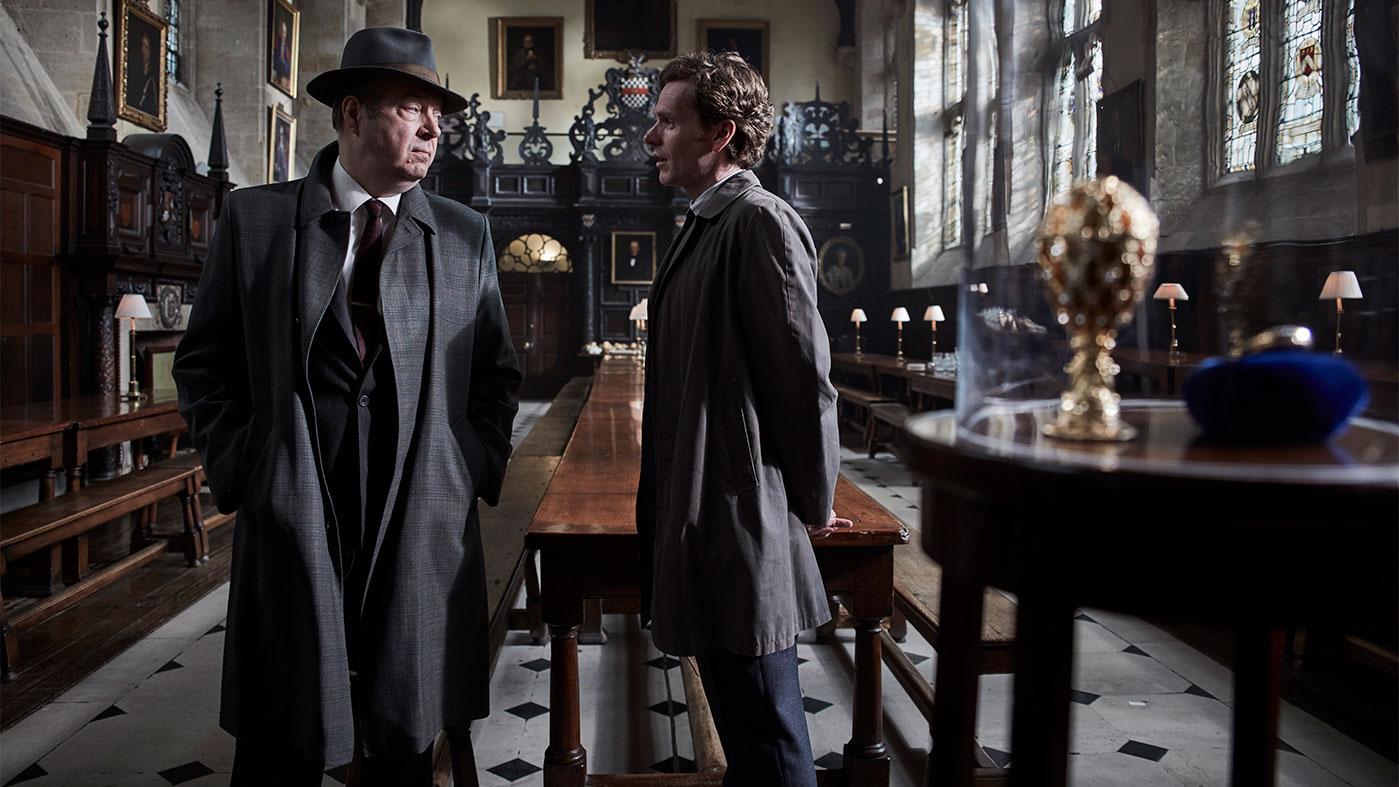 A priceless Faberge egg seems in danger of theft, but a series of grisly murders are more pressing for Morse and Thursday. Photo: ITV and MASTERPIECE

Endeavour airs Sundays at 8:00 pm and is available to stream. Read our recaps of the previous season’s finale and the following episode.

Innocence is being auctioned off. Someone has bequeathed a long-lost Faberge egg by that name to Lonsdale College, and its sale will benefit the school. Lonsdale’s Russian specialist, Dr. Robin Grey, has confirmed the provenance of the treasure, while his old army friend Simon Lake, an art dealer, is managing the auction. But a masked man has been spotted on the roof of the College, his presence marked by a single red rose – the calling card of the international thief known as the Shadow.

Morse is skeptical that the Shadow exists, and he has more pressing problems anyway. The police force is being reorganized through a merger, and he’s now in charge of mentoring an annoyingly chatty, flirtatious young officer named Fancy. And a man has been found dead in a car, shot multiple times by his own gun, with a stake driven through his ear post-mortem.

Joey Sikes was an ex-boxer with ties to organized crime, and his gruesome death seems to indicate gang violence. But Eddie Nero, the crime lord who employed Sikes as a driver and fighter, plays dumb.

Soon there’s another garish death. Dr. Grey is found in his bed at Lonsdale with his eyes gouged out by a steak knife, lipstick traces on his mouth. Despite his recent marriage to a much younger woman, Grey had a reputation as a prodigious philanderer. One of his students thought he saw Grey return to his rooms the previous evening with a woman in a white overcoat, whom the student thinks he recognized as a model from his life-drawing class. Joey Sikes was also last seen with a white-clad woman, and there were cigarette butts with a similar shade of lipstick in his car.

Morse goes in search of the specific lipstick color at a chemist, and runs into Joan. She’s returned to Oxford and is trying to start a new single life, didn’t her dad tell him? Turns out Thursday hasn’t actually seen Joan yet, though he did know she was back. When the two do finally reunite, their interaction is frosty.

The detectives go visit Gerard Pickman, the art teacher who uses the woman in the white coat as a model. Pickman shares the woman’s name: Eve Thorne. When Eve is brought in for questioning, she admits that Joey Sikes was the driver of a taxi she took the night he died, and that she had had a drink and sex with Dr. Grey the night he was murdered – she’s a call girl. But that doesn’t prove she killed them.

And then there’s another victim. Simon Lake, the art dealer, never shows up to Lonsdale for the auction with the Faberge egg, which he’s been keeping in his flat because of the threat of the Shadow. When Morse and Thursday search the flat – which is on the same street where Joey Sikes’s body was found – they find Lake’s corpse in bed, his decapitated head on a silver platter. The safe that held the egg is empty, a red rose poking out of it.

It isn’t a surprise when the detectives discover that Lake had also been using Eve’s services – Joey Sikes had brought her to Lake’s flat the night Sikes was killed. In conversation with Morse, Eve reveals that she’s knowledgeable about art, and that Pickman, the art teacher, also knew Lake and Grey, from their army days. This unexpected connection leads Morse to further investigate Lake. He finds a balaclava hidden among his possessions, as well as a vase of red roses. 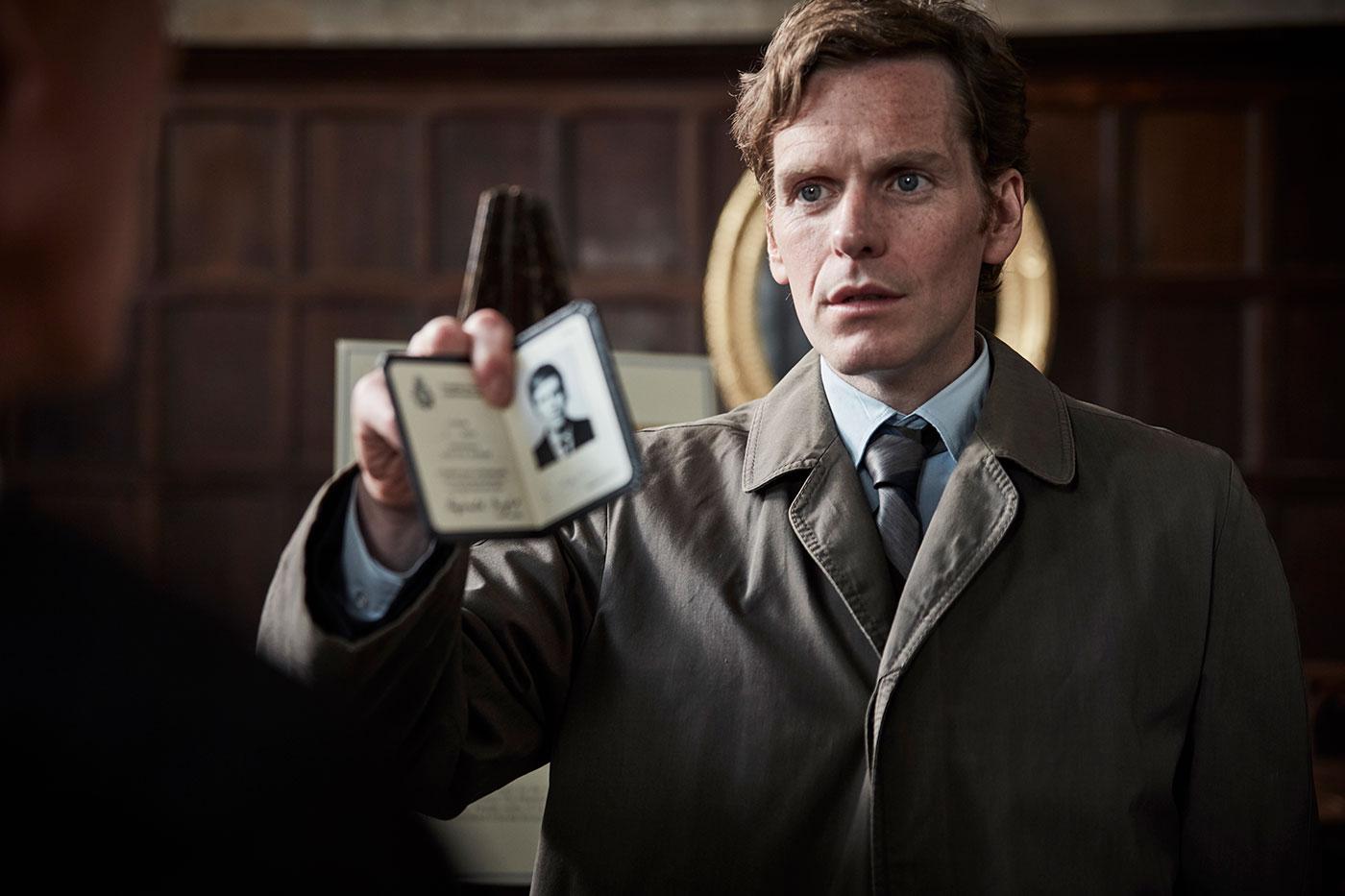 Eve Thorne, a prime suspect who was a favorite call girl of two victims, manages to get under Morse's skin. Photo: ITV and Masterpiece

When he questions Pickman again, the art teacher’s fearful wife reveals a con. Grey, Lake, and Pickman had a plan to commit insurance fraud. They obtained the egg during the war, but it had no provenance. Grey used his expertise to assert its value, Pickman drafted fake Faberge plans to confirm it, and Lake pretended to be the Shadow to raise thoughts of theft. He was to hand off the egg to Pickman and frame it as a burglary, but was killed before he could do so.

Other connections begin to make sense. Both Grey’s rooms and Lake’s flat had matching silk robes. Lake’s flat was being loaned to him by another Lonsdale don, who reveals that they all belonged to a secret hedonistic society together (hence the robes), that hosted a stag party for Grey before his marriage a little less than a year ago, at a hotel called Shiplake Chase. The platter with Lake’s head bore an embossed “SC,” as did the steak knife in Grey’s eyes. And while going through Joey Sikes’s possessions, Morse finds a bar bill from Shiplake Chase.

An employee at Shiplake Chase tells the detectives that the stag party was berserk: things smashed, food everywhere, huge quantities of alcohol. He threatened to call the police, but the society paid off the hotel owner. It seems that Sikes drove the “entertainment” to the party: conversations with switchboard operators reveal that Eddie Nero ran a call girl service, and Sikes was one of the drivers.

While Thursday pores over evidence, including a list of people at the stag party given him by Croxley, another member of the secret society, Morse is assigned to watch Eve and finds himself invited in to her flat. She obliquely references her history: she was an aspiring artist who modelled and danced to pay the bills, then was indoctrinated into a cruel world after being gang-raped at a party. Poking and prodding at Morse’s emotional soft spots, she unnerves him and manages to slip off.

Thursday has an idea of where she might be headed – and who the next victim could be. The list of people at the stag party included a Ruth Astor – one of the switchboard operators. She and Eve must have been the “entertainment” together, and something terrible must have happened. Morse and Thursday rush to Croxley’s flat, where they find him dead and Eve cradling the head of Ruth, who has slit her own wrists.

Ruth was gang-raped at the stag party, before Eve was able to intervene. Both women shared a love of art, particularly Artemisia Gentileschi’s paintings of vengeful women: Jael, Delilah, Judith. Ruth decided to take revenge, staging the deaths like Gentileschi’s paintings. She found all her assaulters while working the switchboard: when they called for Eve and left a message of where and when to meet them, Ruth recognized their voices and went to the location herself. At Lake’s flat, she happened to find the Faberge egg. What did she do with it? Sent it to the only person to ever show her kindness, Eve, with a note: “Buy yourself a new life.” If only Ruth could have, too.