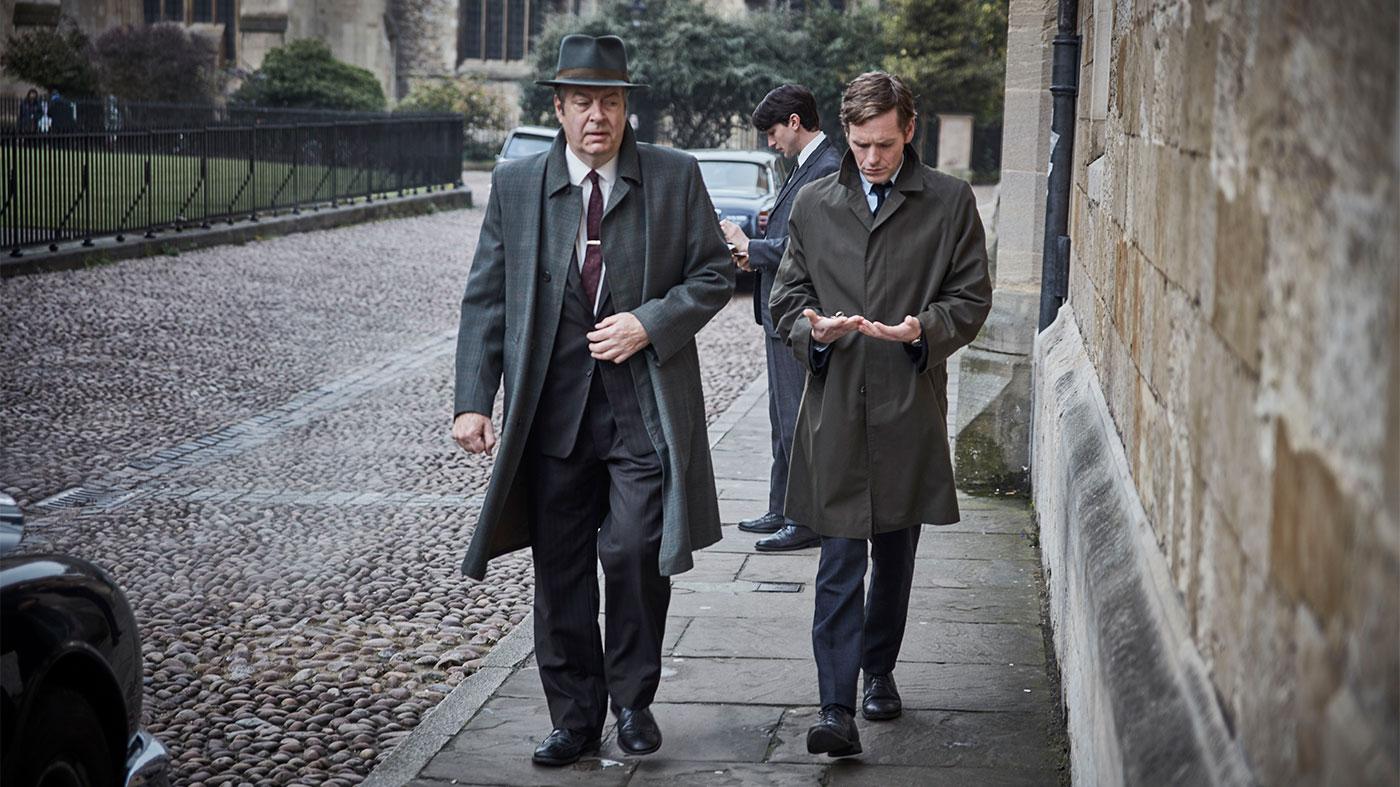 Cowley Station is being shut down, and Thursday is preparing for retirement. Photo: ITV and Masterpiece

Endeavour airs Sundays at 8:00 pm and is available to stream. Read our recaps of the previous episode and the following season's premiere.

Cowley Station is being shut down, and Morse has already found a new job as a classics teacher at Coldwater, a boy’s school. He will move into the quarters of the previous teacher, John Ivory, who has disappeared, with his wife – wait, what?

Morse is actually going undercover at the request of Division, because the two officers investigating Ivory’s disappearance unfortunately – and perhaps fishily – have died in a car crash. Trewlove is posing as his wife so that the pair can look into the school’s affairs.

Coldwater is a suspicious place. The boys in Morse’s class are confident bullies, who insouciantly question Morse, always appending an impertinent “sir.” One of them is the son of the gangster Eddie Nero, who’s in the midst of a turf war and has just been shot at in broad daylight by his rival Cromwell Ames’s men. Thursday arrests Ames on suspicion of this attack as well as several other murders of Nero’s men, but Ames has alibis and is released. A tail is assigned to him.

At Coldwater, Morse begins to learn about Ivory. The missing teacher protected an oft-picked-on boy named Stanlow from bullying, both from the boys and from the cruel teacher Blackwell, who inhumanely punishes Stanlow for refusing to fire a rifle during cadet practice. Blackwell also argued with Ivory the night he disappeared, while another teacher, Bodnar, says Ivory was a bully who brought out the boys’ basest instincts. The discovery of a bloody shirt with 23 stab wounds in Morse’s desk nearly confirms foul play in the disappearance of Ivory.

Then Morse finds a body – but it’s not Ivory. Snooping around the graveyard that Ivory reportedly frequented to indulge his alcoholism, Morse finds the corpse in a coffin in an open mausoleum. It’s Rountree, another boy whom Ivory protected from Blackwell. Rountree had been expelled just before Ivory disappeared, for punching Ivory, according to Ivory’s own report. No one had seen the boy since Ivory drove him to the train station. The autopsy of Rountree reveals he had snorted pure heroin.

There are other drugs at Coldwater. Trewlove is harassed by three boys who are obviously high while walking home one day. And soon a connection is revealed to Eddie Nero’s drug running. Ames arrives at one of Nero’s boozers with a gang of armed men. Fancy, who has been trailing Ames, calls in reinforcements. When the police arrive, the place is devastated. Everyone is dead, including Nero, Ames, and Fancy, though why the policeman would have entered a shootout solo is unclear. There are three bullets in Fancy, but they didn’t come from any of the weapons at the scene.

A clue at the shootout leads back to Coldwater, however: a packet of drugs addressed to Ivory. And Ivory’s wallet soon turns up in Morse’s desk, containing a business card for Nero. It seems Ivory was a supplier for Nero’s drug trade: the teacher often traveled to countries where hashish or opiates were grown, and had drugs shipped to him before handing them off to Nero or selling them to the students.

The boys in Morse’s class are vaguely threatening towards him, implying that they did something to Ivory. But when Morse intimidates one with the possibility of a prison sentence, the boy admits that they found Ivory’s shirt and wallet in the woods and were just trying to spook Morse – they didn’t kill him, and they don’t know where his body is.

As the station nears its closure, Morse is determined to wrap up the case and give Thursday one more good catch, since his elder partner is retiring rather than transfer to a new station.

Except he isn’t any more. Thursday has learned that the loan he gave to his brother Charlie – consisting of his and Win’s retirement savings – will not be repaid. Charlie took the loan because he has been blackmailed into using his company as a front for fraud, and he has finally realized he’s stuck in this mess. Not only is Thursday’s money gone, fraudsters may now have their hands on a check with his name on it, so he could become embroiled in a criminal investigation. And he’ll have to keep working. Win is so furious that she leaves to sleep at a friend’s house.

Even though it’s no longer his last case, Thursday will at least have another arrest to make, courtesy of Morse’s deductions. Morse realizes Stanlow is the key somehow, and when he and Thursday rush to Stanlow’s bed during a Coldwater service in celebration of Armistice Day, they discover a diagram and formula for shooting out of a tower, as well as a missing rifle from the armory. Morse stops Stanlow from shooting the abusive Blackwell from the tower just in time.

After Rountree disappeared, Stanlow became Ivory’s favorite – meaning he was enlisted to supply drugs to the boys and run errands for Ivory, including relaying messages between Ivory and the headmaster’s daughter, with whom Ivory was having an affair. Rountree himself either overdosed or was killed by Ivory when he outlived his usefulness, so Stanlow replaced him.

Stanlow was taken ill before delivering a message to the headmaster’s daughter one day, however, and asked the school matron to do it for him. The matron knew of Ivory’s abuses and drugs, and, wanting to protect the boys from this devil, took the place of the headmaster’s daughter at her rendezvous with Ivory in the woods and murdered him. She then hid the body where it belonged: in a septic tank.

One case closed, but it’s still a mystery who killed Fancy. As Morse, Thursday, Strange, and Bright pack up their things on the station’s last day, they vow to avenge Fancy. No killer goes unpunished.