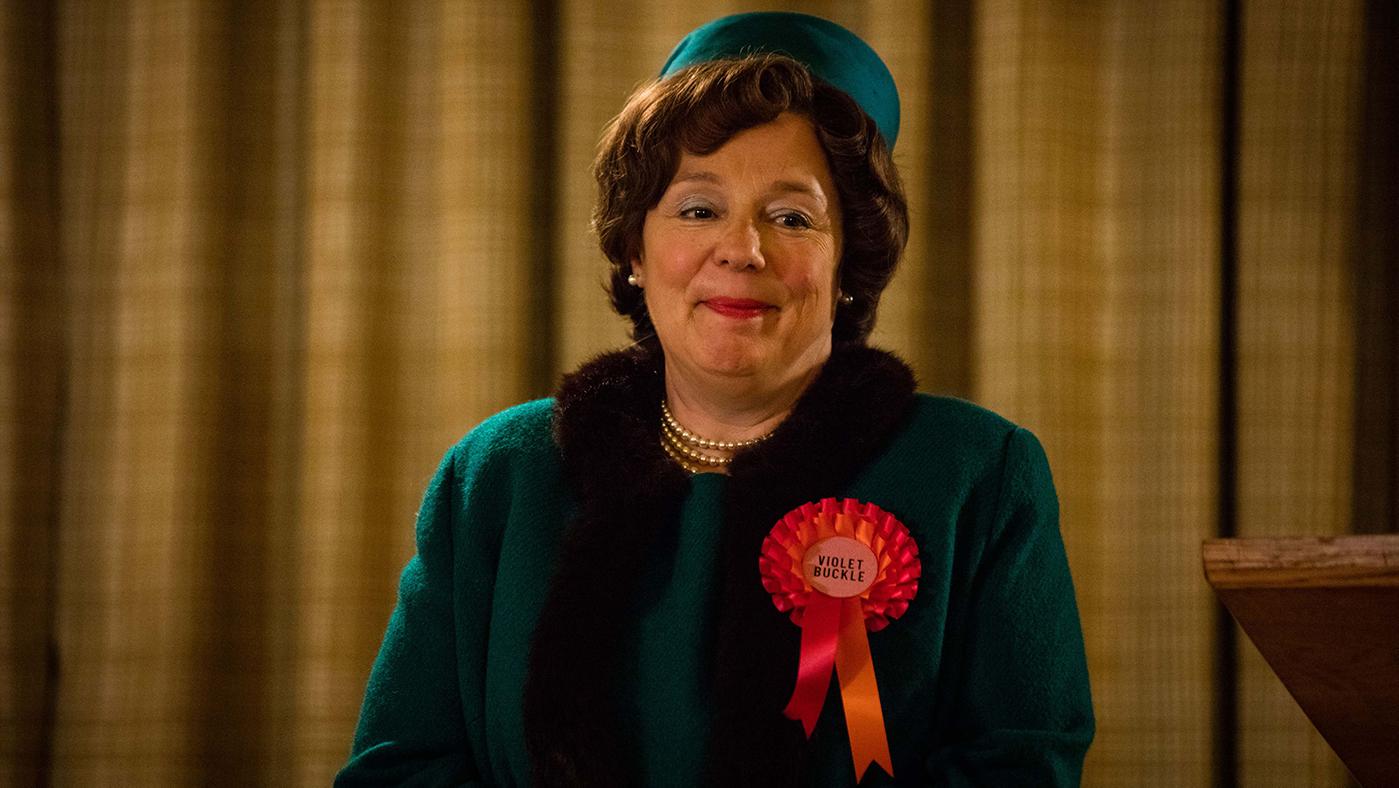 Violet has won the election to sit on the town council. One of her newest constituents is Hazel Becker, a young mother with an eight-month-old daughter who has just settled in Poplar, after stints in Stepney and Cyprus following her husband’s military career. She’s especially keen on learning about a measles vaccination trial led by Doctor Turner. But after Trixie and Sister Frances drum up in interest in the trial and Doctor Turner vaccinates his own son to show his belief in its safety, Hazel is upset to learn that her daughter, Dawn, is too young to take part. She snaps at Sister Frances and storms out of the clinic.

Hazel is incredibly anxious about Dawn. When the infant has a slight fever, Hazel ignores her husband’s suggestion that it might be due to teething and rushes to Doctor Turner’s clinic, jumping ahead of waiting patients because she thinks her daughter is dying. It is, in fact, just teething. Doctor Turner asks Shelagh to visit Hazel at home and comfort her – she might be feeling overwhelmed as a first-time mom and isolated as someone new to the neighborhood.

Betty Marwick is certainly not overwhelmed by the prospect of a child. She already has five and is pregnant with a sixth. Even though her husband is away for months at a time working on a container ship and her children are rowdy, she can manage. But after an easy delivery of a son she names Kirk, things get a lot more complicated. Kirk has a hole in the roof of his mouth and a malformed lip, both of which will require surgery and special care.

Kirk cannot nurse and must drink from a bottle, but it’s difficult for him to do even that. So he cries a lot, distressing Betty and leading the other mothers at the clinic to make cruel comments. Betty finally gets the hang of feeding Kirk, but that’s in the quiet and care of the clinic. The neighbor taking care of her five other children is exhausted and asks Betty to come home – after Valerie has shown a photograph of Kirk to his siblings so as not to startle them – and Betty acquiesces, despite Valerie’s recommendation that she stay at the clinic a while longer. Providing Kirk with the intense care he needs in a chaotic house with five other kids is not as simple. 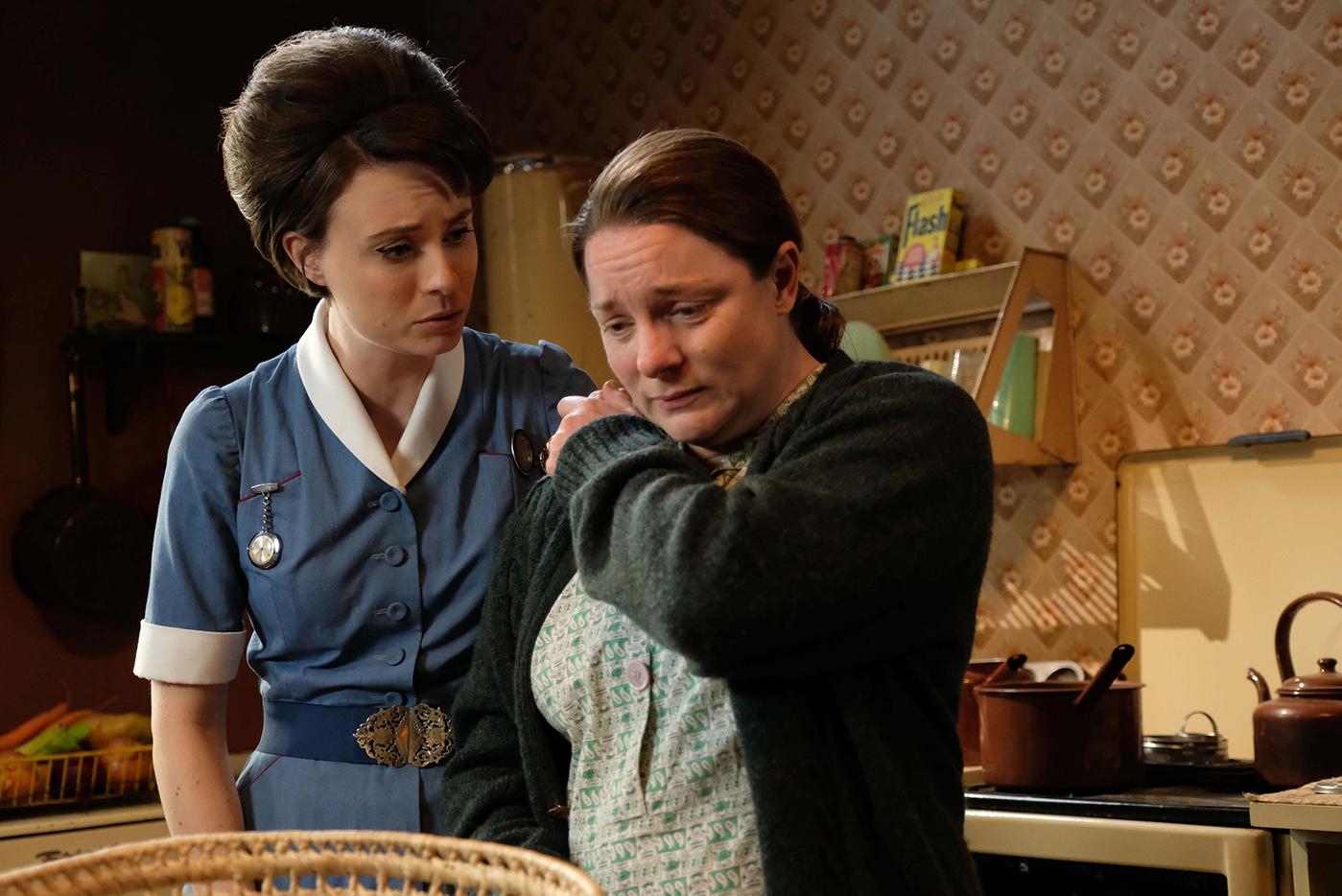 Betty Marwick already has five children, so she's more than prepared for one more. But her newest son proves to be much more difficult than her others. Photo: BBC/Neal Street Productions

Phyllis’s idea for a Whitsun celebration also proves to be more complicated than expected. She proposes setting up a “beach” outside Nonnatus House by trucking in sand. Violet, her new councilwoman, isn’t keen on the idea, but Phyllis’s reluctantly appointed new assistant scoutmaster, Sergeant Woolf, manages to convince her. Yet some details are fudged when Fred arranges a sand delivery: it arrives a week early, unceremoniously dumped in a heap that blocks Phyllis’s car. As Fred laboriously moves the sand, Violet adds to Phyllis’s tasks. Now enamored of the idea, she requests extra amenities such as a paddling pool – and delegates their procurement to Phyllis.

While Phyllis deals with lighthearted things, Shelagh learns about a dark period in Hazel Becker’s past when she visits her at home. When Shelagh recommends a playgroup as beneficial for a first-time mom, Hazel responds that this isn’t her first child. She doesn’t talk about what happened to her previous child with anyone.

Shelagh reports this to Doctor Turner, who reviews Hazel’s medical records and discovers that she lost an eight-month-old son in Cyprus while he slept. The doctors couldn’t determine a cause of death. As Doctor Turner’s assistant Miss Higgins points out, the anniversary of the boy’s death is approaching, and Dawn is eight months old now. It explains Hazel’s over-protective behavior; she is even forcing her husband to sleep on the couch so that she can watch Dawn in their own bed, making sure she doesn’t slip away in the night.

Betty Marwick has started to think it would be better if her own infant slipped away. The thought terrifies her, but she’s overwhelmed taking care of five children and an infant that requires extra attention, all without the help of her husband, who’s still at sea. After Kirk catches an infection from getting milk in his lungs because of improper feeding, Betty tells Valerie that she wants to put Kirk up for adoption.

Valerie is distressed by this news. Sister Julienne advises her to help Betty as much as she can with rearing her family, in case she’s considering adoption simply because she’s overwhelmed and not because she doesn’t want Kirk. So Valerie marches to the Marwick flat and orders the oldest boy – who has been chastised by Sergeant Woolf for reckless scooter driving – to keep the house in order, then shuffles the children off to school so that Betty has some alone time to devote to Kirk. With the extra help, Kirk slowly improves and Betty’s love for him reappears – and she realizes that she doesn’t want to give him up. 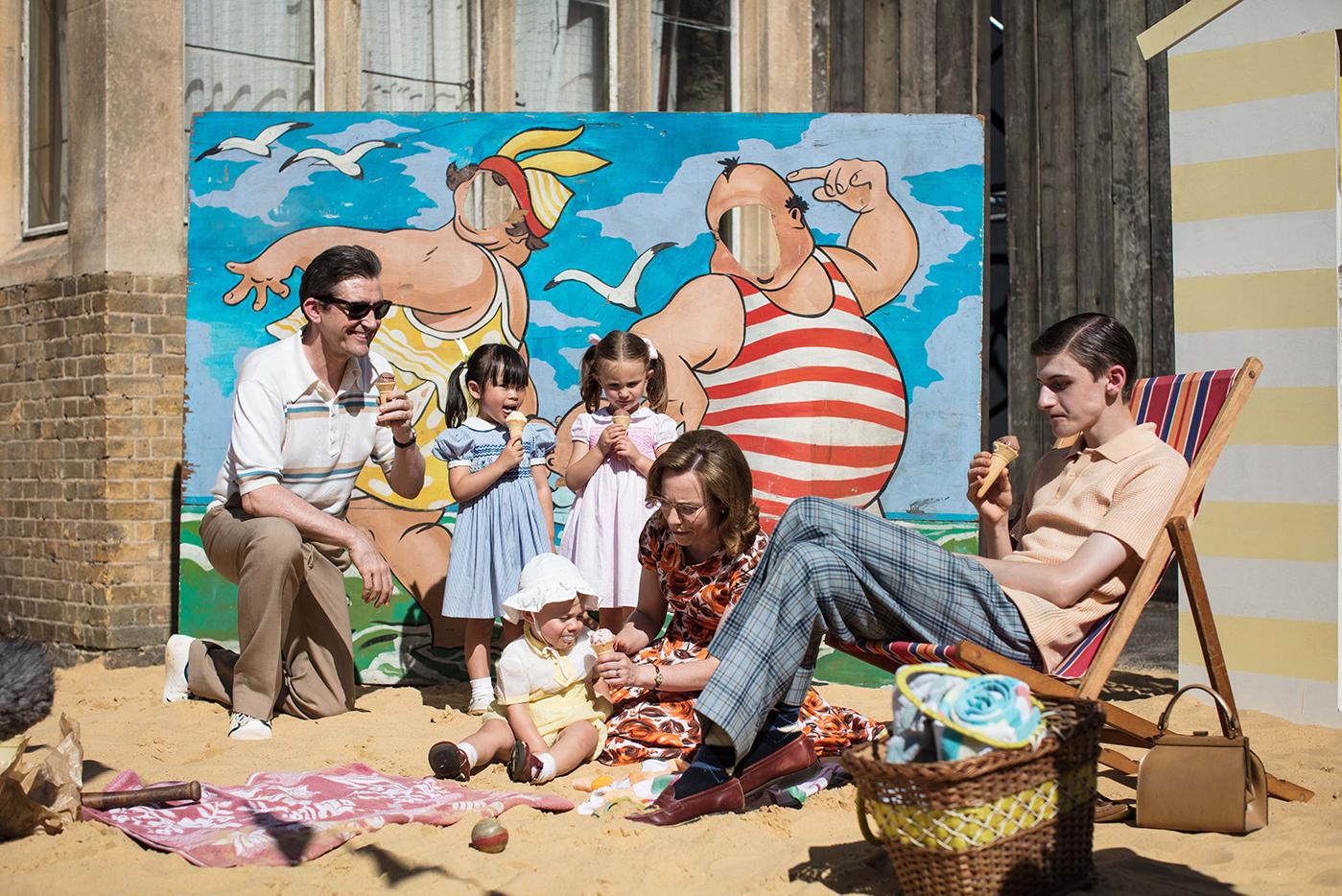 One reason beyond the practical that Betty was struggling so much is that she’s proud of her motherhood, but she doesn’t feel that she has been a good mother to Kirk. She tells Valerie that when she had her first child, people applauded her – and no one had ever clapped for her before. So when her husband finally returns from sea just before Kirk’s first surgery, sees Betty holding their newest son, tells her Kirk is beautiful, and starts clapping, Betty beams. Now she knows she made the right decision.

Hazel also needs to know that other people are confident in her as a mother. She doesn’t get that reassurance at the playgroup, where she slaps away another child’s hand from Dawn, fearing germs, and is shamed out of the room by the other mothers. The discovery of a rash on Dawn further shakes her, and she again rushes to the clinic. Doctor Turner promises her that it’s common and that Dawn will be okay, but Hazel finds it hard to believe any medical prognosis after the unexplained death of her son. Doctor Turner’s profession of confidence in Hazel helps a bit, but true comfort comes from a different, rather unexpected source.

Since it’s late in the evening and Doctor Turner still has rounds to attend to, Miss Higgins offers to drive Hazel and Dawn home from the clinic. While seeing the pair into their apartment, Miss Higgins speaks to Hazel’s husband, and learns that Hazel never said goodbye to her son. She was so depressed that she didn’t go to his funeral. Miss Higgins suggests that perhaps Hazel needs that closure.

So Hazel’s husband tells her that they need to start talking about their son’s death; she can’t just keep her grief bottled up. Although Hazel can’t visit his grave in person (it’s in Cyprus), Miss Higgins again has a useful suggestion. She brings the Beckers a rose bush in memory of their son, in lieu of a grave. This seems to finally bring Hazel some comfort. She lets Dawn sleep in a crib, allowing her husband to return to their bed. Her fears may not be completely assuaged, but she’s feeling more confident in her ability to safely raise Dawn.

When Violet opens the “beach” in front of Nonnatus for Whitsun, Hazel even brings Dawn to the celebration, letting her interact with the other joyful children and families there. It’s a bright, sunny day.