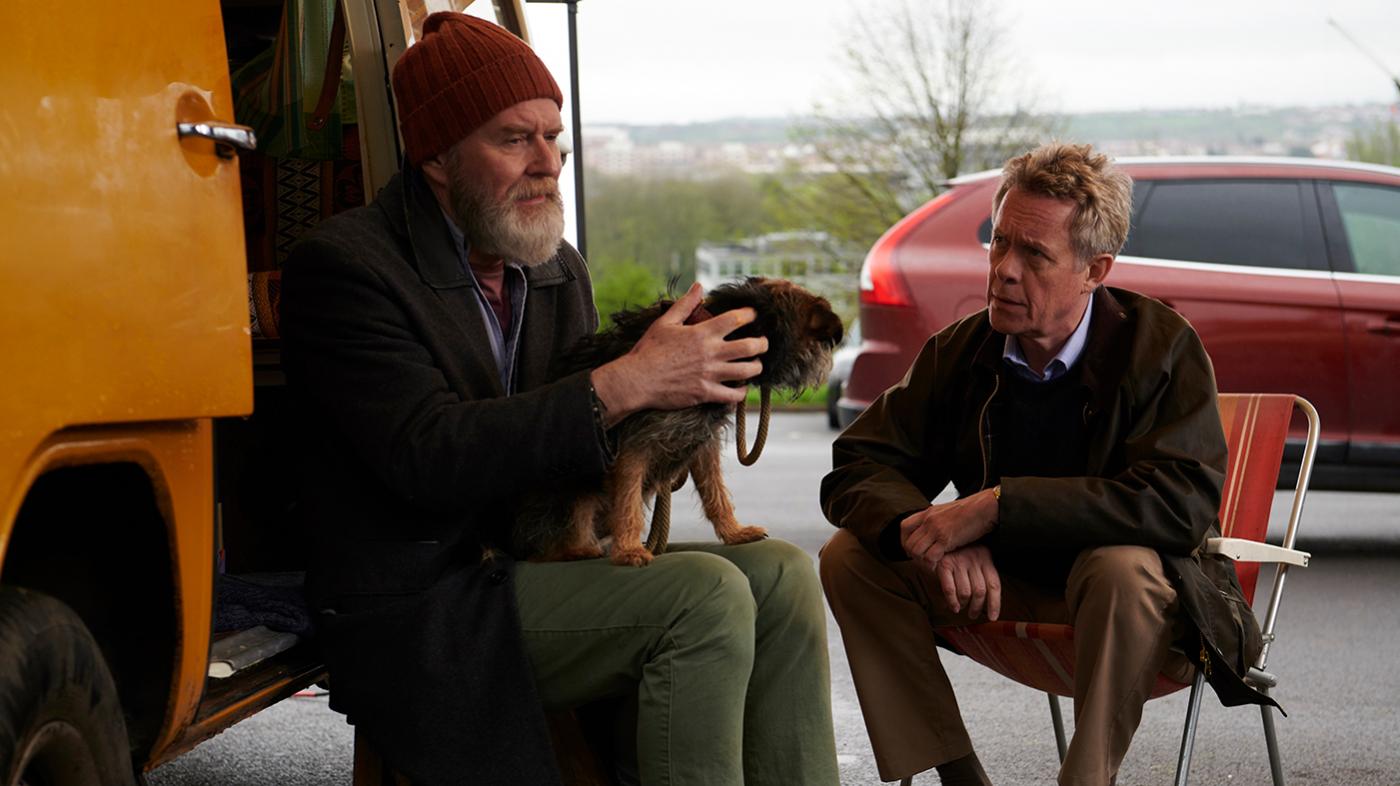 There are troubling allegations against both Chris and Tim in their break-ups with their first wives. Photo: Mainstreet Pictures for ITV and MASTERPIECE

Media attention surrounding the reopened Hayley Reid case is obsessive. It devastated tourism in Hayley’s town of Middenham when she first disappeared. Now, it has forced her boyfriend at the time to take leave from his work and has also descended upon Jamie Hollis, the TV quiz show host. A blog post has revealed that the police interviewed him and now the press are at his door, but his lawyer tells him that he can’t sue the blogger: she’s a 27-year-old living in public housing; she has nothing to lose. His show is suspended for a month while the storm blows over.

The media may not have turned their gaze on Pete Carr yet, but the police certainly have. DNA tests have revealed that his blood was found at the scene of the church robbery on the night Hayley disappeared. And the detectives know from Jamie’s ex-wife Mel that Pete, along with his three schoolmates, lied about that night. Confronted by Cassie and Sunny, Pete admits that he panicked and didn’t tell them about going to the pub that night. He also confesses to robbing the church; he needed money to pay for a flight back to Hong Kong.

But that’s not his only crime. He also served a three-month prison sentence in Hong Kong for defrauding a disability charity for $100,000, causing it to close. He says he was set up and that the justice system there was corrupt. When his wife meets him outside the police station and demands to know why he is being interviewed, he says he meant to pay the charity back, there are no excuses for the robbery, and he deserves to be punished. But that’s the worst he has ever done: he is a changed man now, and he had nothing to do with Hayley’s disappearance. His wife still tells him the marriage is over.

She’s not the only wife to feel deceived. Jamie’s wife is upset that he didn’t tell her the police interviewed him, and her doubts only intensify when his ex-wife Mel gives a radio interview in which she suggests there may be something “aberrant” or dark in Jamie’s serial sexual relationships. When his current wife confronts Mel for giving the interview, Mel informs her that she has already received emails from several of Jamie’s affairs about his outré sexual proclivities, and that she’s forwarding them to the police. There’s nothing illegal, but they might lead the detectives to something.

It is during this crisis in Jamie’s marriage that Pete appears at the door: he’s been kicked out and needs somewhere to stay. Jamie refuses. Pete threatens him: there are things he knows about the night Hayley disappeared, things involving Jamie’s son Eliot. But Jamie holds firm.

That’s not the only attempted blackmail. After the police interview Tim Finch’s ex-wife Derran – she corroborates Mel’s account of the night Hayley disappeared, and also says Tim was manipulative behind closed doors, mentally, physically, and sometimes even sexually abusing her – she tries to get him to pay her 50,000 pounds, over and above their divorce settlement. If he doesn’t, she’ll show proof that he abused her to the police. He refuses and tells her he’ll call the police himself if he sees her again.

So Derran goes to the police with photos of a woman’s bruised body that she says her friend took of her in the 1990s. But her face is not visible in the photos and the friend Derran claims took them is deceased, so the photos cannot be used as proof of abuse. Plus, Derran has a history of psychological issues that could affect her testimony. 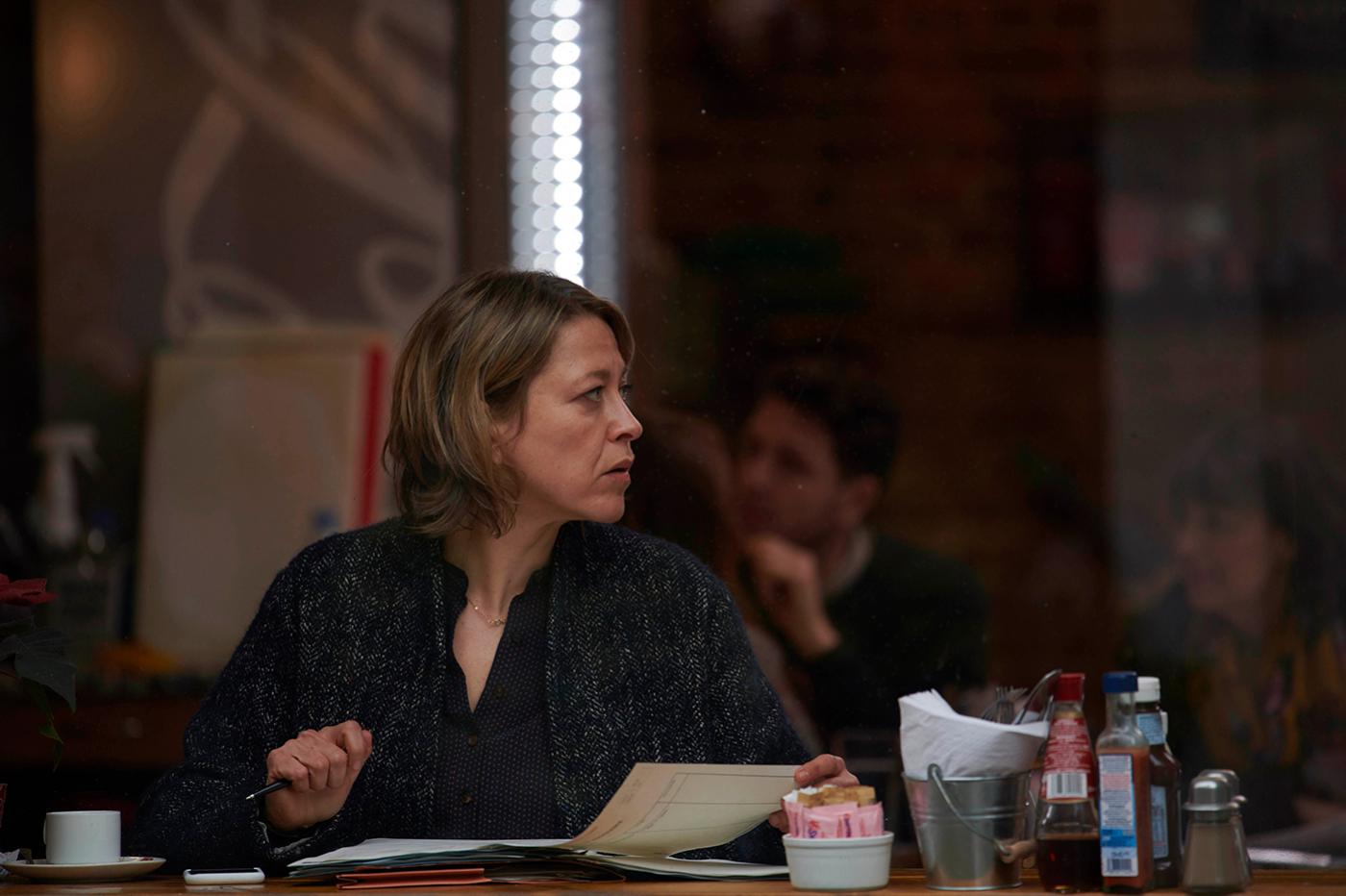 Cassie has made a series of mistakes that could jeopardize the case and put people in danger. Photo: Mainstreet Pictures for ITV and MASTERPIECE

Nevertheless, Cassie and Sunny speak to Tim’s two daughters about the claims of their mother, from whom they are estranged. Tim has already told them and his current wife that Derran tried to blackmail him, and they are confident in him. The daughters – well, really one of the daughters; the other barely says anything – tell the detectives that there was never any evidence that Tim was violent when they were growing up. They also reveal Derran’s attempt at blackmail.

Chris Lowe’s daughter also has some pertinent information for the detectives. The main reason his career crashed and his marriage ended around the turn of the millennium was an arrest at his office. He had used his credit card to visit child abuse websites. His business partner eventually revealed this to Chris’s wife; she ended the marriage, and his daughter has not seen Chris since. But when the police search for a record of Chris’s arrest, they can’t find it.

Cassie’s relationship with her father may not be that bad, but it is going through a rough patch. She suspects he may have dementia, but when she recommends that he get tested, he becomes defensive. He accuses her of coming up with an excuse to scupper his budding relationship with Jen because Cassie is lonely and doesn’t want her father to leave her living alone.

While her father does seem to be forgetting things, Cassie herself has been making a series of mistakes. She ignored Chris Lowe’s request for someone to be with him during his police interview, asking one more personal question before letting him be. That has led to Tim filing a formal complaint against her on Chris’s behalf. And Cassie makes a more serious blunder soon after, leaving the case file on Pete Carr at a café in her rush to get to a scheduled interview with Chris (for which he’s a no-show). When she realizes her mistake and returns to the café, the file is gone.

Whoever took it sends it to the blogger who brought media attention to Jamie Hollis, and she publishes its contents, revealing that Pete is a suspect in Hayley’s disappearance, as well as his crimes involving the disability clinic and the church.

Pete is on a train when this news breaks. The first he hears of it is a call from his boss telling him he’s fired. “Google your name,” his boss tells Pete by way of explanation. When Pete discovers that the public now blames him for Hayley’s disappearance, he calls Tim to ask a favor. He has information about Eliot, Jamie’s son, that he wants Tim to share with the police – they will no longer believe anything Pete says, after his previous lies to them. Whether this information is about Eliot’s arrests for drunkenness, possession, and stealing his dad’s car in the months before the millennium – arrests that the police have just learned of – remains to be seen.

Meanwhile, Sunny calls Jamila, the woman with whom Chris Lowe is now living, to ask about Chris’s whereabouts. She doesn’t know anything, but is concerned that the police are looking for him. Sunny advises her that she might want to take her son and go someplace safe for a bit, somewhere Chris doesn’t know about.

Pete doesn’t have the chance to find safety. As Cassie reads out a public apology for losing his case file, promising that the police will prosecute anyone who publishes the file or anyone who incites violence against Pete online, Pete is approached by a stranger and stabbed. He sinks to the ground, bleeding. No one is around to save him.