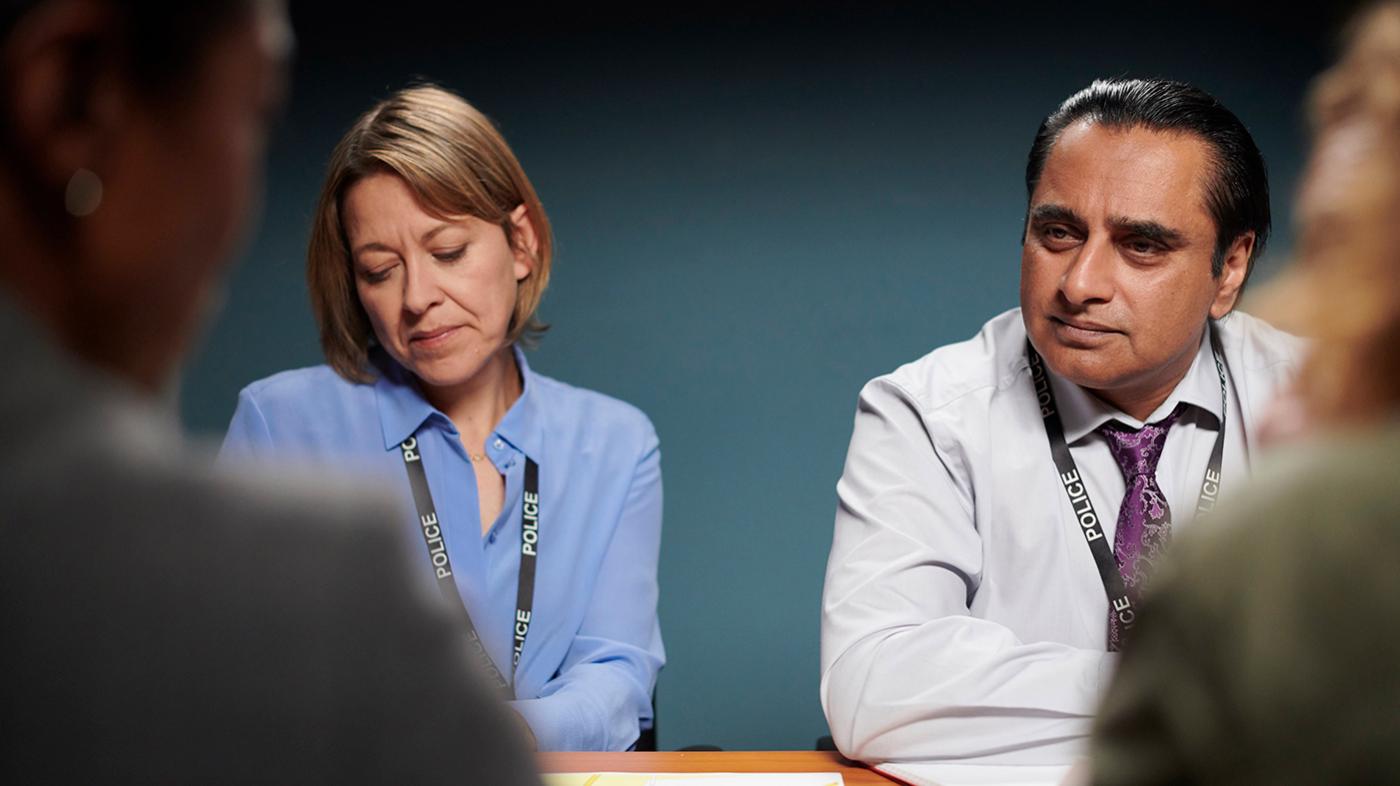 Cassie is having a pleasant evening for once, enjoying a date with the retired detective who worked on the initial investigation into Hayley Reid’s disappearance. He helps Cassie accept her recent mistakes –but after the date ends with a kiss on the cheek, one of those mistakes blows up. Pete Carr has been stabbed by a man linked to online far-right groups after a blogger published the police’s case file on him. Pete seems to be stable now, but Cassie blames herself – after all, she’s the one who left his file in a café to be found by anyone.

The blogger is arrested for inciting violence: she had published a photo of Pete and his work address, saying it was time for people to take matters into their own hands. She didn’t want anyone to take action, she sobs; she was just trying to shock, which seems to be the only way you can get a job as a journalist these days.

She wanted a job, but now she has a man’s death on her conscience, as does Cassie: Pete dies in the hospital, after his wife apologizes to him for her denunciation of him when she learned about his past.

And yet the Reid family continues to have faith in Cassie, so she’s still in charge of the case – and it must go on. She and Sunny interview Pete’s three schoolmates again, now that the detectives have learned they gave a false account of their whereabouts the night Hayley disappeared.

Jamie is defensive when the detectives ask about the lie and suggest that his son Eliot, who had recently been arrested for stealing his father’s car, might have hit Hayley in a drive-by. Jamie’s lawyer protects him from further questions.  Tim admits that Jamie called all the schoolmates after the police first approached him, so he decided to give the same account as Jamie, thinking he was protecting him or Eliot. But Tim has new information from Pete: Pete saw Eliot climbing through a window back into the house late that night.

This turns more attention on Eliot. The detectives interview Mel, Jamie’s ex-wife, and she tells them her car was damaged over the New Year’s holiday – Jamie told her he hit a deer. Jamie goes to speak to Eliot himself. He has always known Eliot hit something in the car that night, but Eliot said he couldn’t find whatever it was and hoped it was an animal. Now Jamie demands to know if Eliot hit Hayley, lied to him, and returned to pick up her body and bury her later near London. Eliot simply sobs.

But they’re sobs of relief: Eliot was in Switzerland on a school trip right after Hayley disappeared, so he couldn’t have returned to bury her. All these years Jamie and Eliot have thought it was possible that Eliot hit Hayley and her body fell into the river beside the road, sending her out to sea. When her body turned up, Jamie became afraid that Eliot had killed her and buried the body to hide the crime – but now he knows it couldn’t have been Eliot. He brings his son to the police and tells them everything, and also confesses that he has ruined Eliot’s life by holding this suspicion over him for almost twenty years.

Eliot’s teacher at the time confirms that he was in Switzerland, and the retired detective from the original investigation says that the body had to have been moved within a day or two of Hayley’s disappearance, because of the police and media attention that descended upon the town afterwards. Eliot couldn’t have come back after his Switzerland trip to move the body. 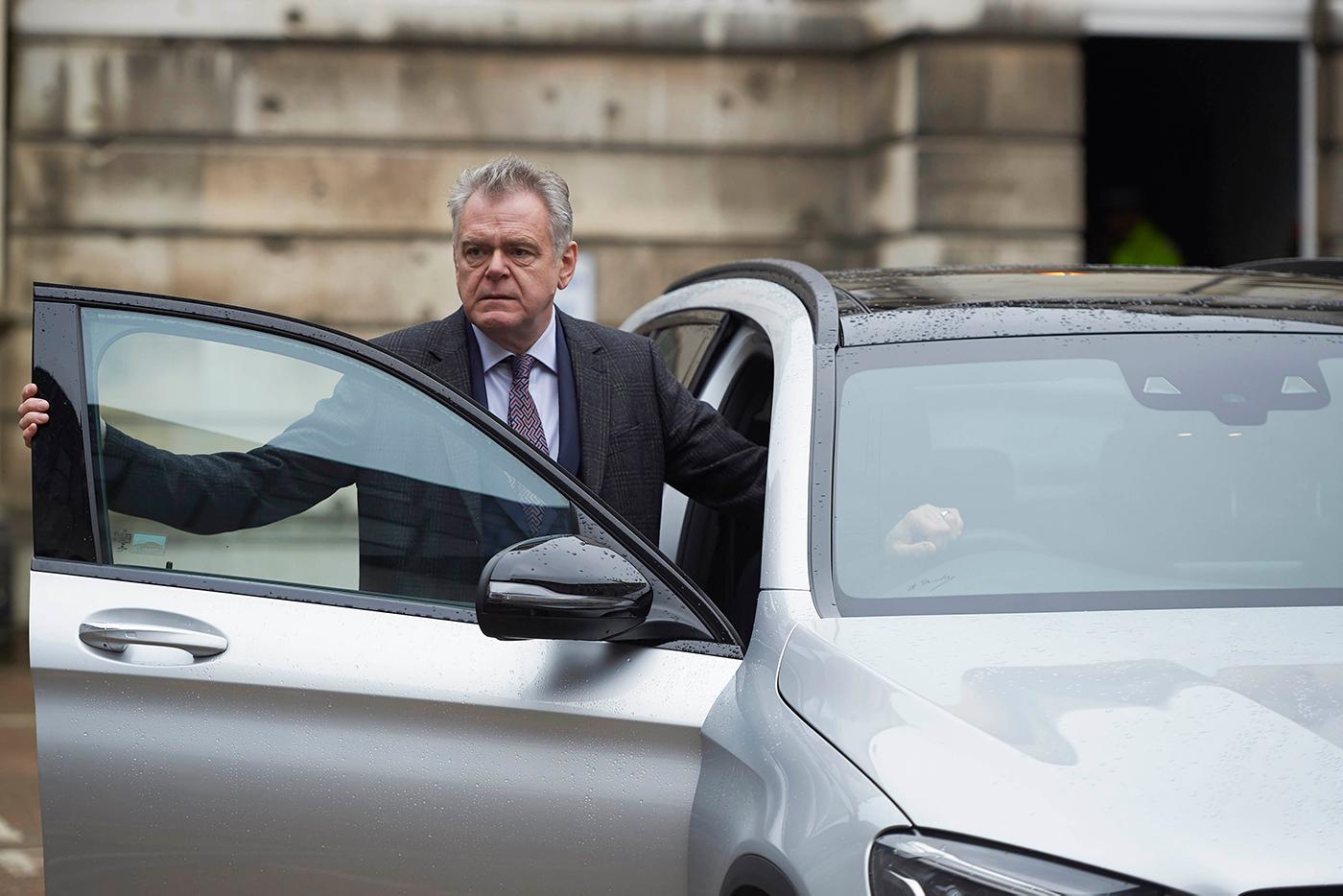 Suspicion shifts from Jamie to his son Eliot as new stories emerge. Photo: Mainstreet Pictures for ITV and MASTERPIECE

Chris Lowe also has a potentially vindicating tale to tell the detectives when they interview him again. He lied to Cassie because he panicked – he knows how easily someone can be blamed for something they didn’t do. He did have a manic episode that New Year’s Eve, one exacerbated by cocaine, and he did wander off into the night just to walk around for a couple of hours. But he never saw or did anything to Hayley.

He was in the midst of the most difficult period of his life: he had been arrested at his office for credit card usage linked to child abuse websites, and soon after New Year’s his wife found out and divorced him, forbidding him from seeing their daughter. Within four months he lost his daughter, his wife, and his career – and he was innocent: someone had cloned his card and used it. Eventually he was able to hire a team to investigate, and all charges were dropped in 2003. By then he was out of money, homeless, and too exhausted to try to explain everything to his family. Only in 2010 did he begin a new life, when Tim found him and bought him a van to live in, helping Chris to start fresh.

Following these confessions to the police, Chris goes to Jamila, the woman he loves, and reveals everything. He promises to give her space to think, and goes to stay in his van for a little while instead of the flat he now shares with her and her son.

When Cassie checks with the investigators who arrested Chris, they acknowledge that, in hindsight, the investigation was flawed; Chris should never have been charged.

Pete also seems to be innocent, at least in the disappearance of Hayley. One of the detectives has deciphered a code that Hayley used in her diary, probably to protect herself in case her mom read it: when she says she had tea, she’s referring to sex, and when she says she ate cake, she means she took drugs. On New Year’s Eve, she was planning to get drugs before going to her party.

The detectives go through records of drug dealers in Hayley’s town and find one who might have sold to her. He confirms that she did come to his house that night shortly before midnight. And the location of his house puts Hayley nowhere near either the church that Pete broke into that night or the road where Eliot hit something. So both of them seem to be free of suspicion.

That leaves Chris and Tim as suspects. Given all that Chris was going through and the fact that he seems to be telling the truth about it, the detectives turn their attention to Tim. Even one of his daughters has become nervous that he might be a bad man, in the wake of his ex-wife Derran’s accusations of abuse. She offends her father by asking him if the accusations are true, then is unsatisfied by his profession of innocence, so she goes to visit her mother, from whom she is estranged. Derran explains that she hid the abuse from her daughters because she didn’t want them to know about it. She also says that Tim never paid her a divorce settlement: she instructed her lawyer to give up the case after Tim put his hands around her neck and threatened to kill her. Tim’s daughter isn’t sure what to believe.

A new piece of evidence makes the detectives’ suspicion of Tim grow. Working on the hypothesis that someone with a body to bury might drive faster than usual, they check his record for speeding tickets. He’s only had four of them in his life – and one of them was the day after he and his mates returned to London from Middenham after the New Year. Where did he get it? Just outside Middenham.

The police arrest Tim. When asked about the ticket, he says that he left his laptop at the rental cabin and had gone back to retrieve it. He was speeding because he was trying to make it back to London in time for a surgery. It’s a likely story – but when the detectives search his house, they find a box in the basement with a necklace, scrunchies, and a girl’s pair of underwear.