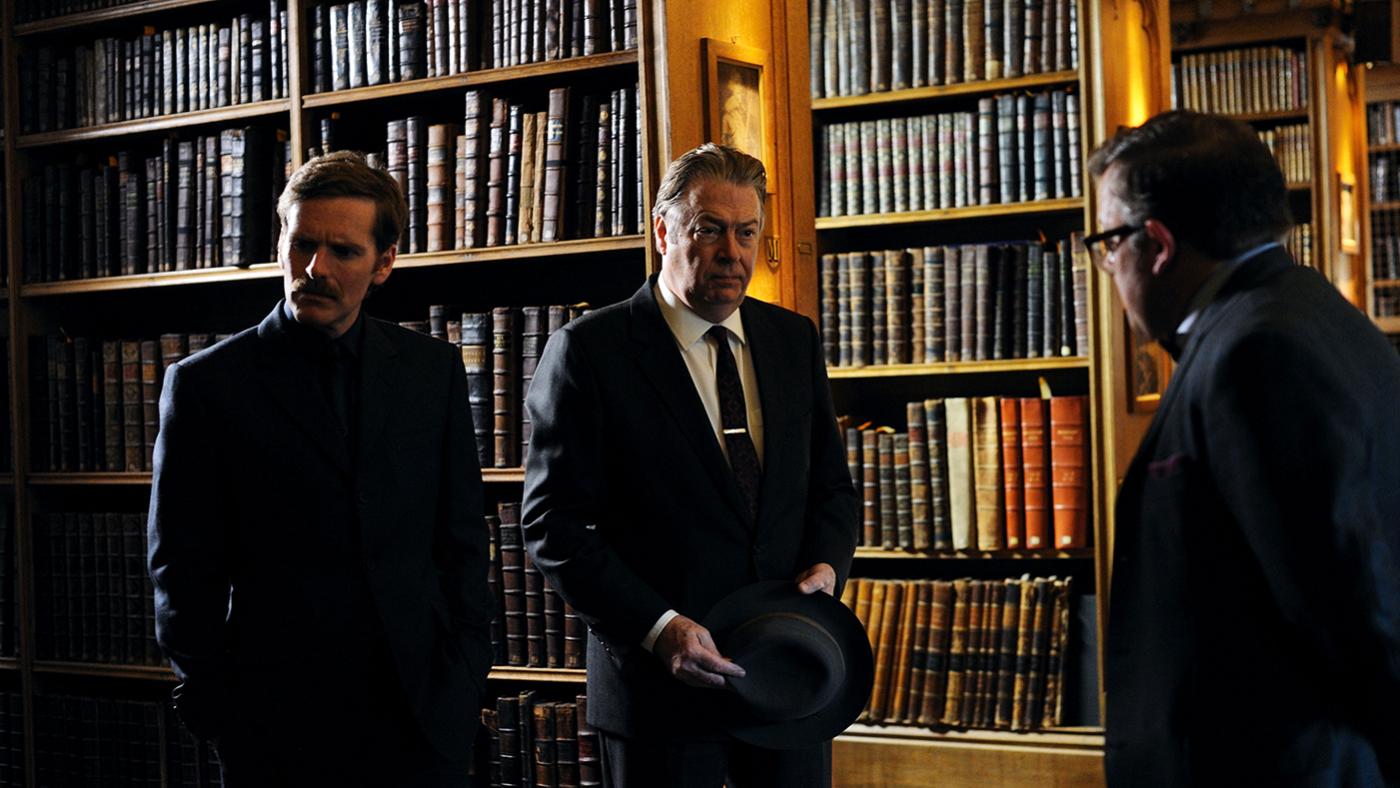 Endeavour is available to stream. Recap the previous episode and the next season premiere.

Murder has found its way into a hallowed sanctuary: Oxford’s Bodleian Library. Osbert Page, the chief librarian, has been stabbed in the back amidst the stacks, muddy boot prints leading to his body. Page is found by his assistant Lucy Paroo, who says Page was a loner about whom she knew little, other than that he was a “rambler,” devoted to long walks in picturesque places. He had recently been getting into spats with Jasper Nicholson, a professor who was at the library the night Page died, over Nicholson’s repeated requests to see books from a collection of libelous or obscene works.

Nicholson explains his requests: he’s writing a paper on Edwardian erotica. Nicholson’s porter tells Morse and Thursday that Nicholson has been targeted lately. Someone has been writing “Dora” on his blackboard and leaving odd trinkets in his cubbyhole. But Nicholson shrugs it all off as student pranks and refuses to discuss it with the detectives.

Whoever killed Page was looking for something. Morse and Thursday find his rooms turned over and dirtied, like the library, by muddy boot prints. One item stands out: a map of a British peninsula marked with the letters “HB” and a Greek word meaning “wind gods.”

Perhaps it has something to do with Page’s rambling. Professor Burrowes, who was also at the library the night Page died, is a fellow rambler who says the peninsula is great for hikes. He’s a geology professor who’s also interested in stamps, and has been assigned to catalog a recent bequest to the college: a stamp collection from a man named Teagarden. Lucy Paroo recalls that Page also had a row with Burrowes recently, over something involving the Teagarden donation; Burrowes says it was about something going missing from the bequest.

When Morse speaks with the Teagarden granddaughter, who is overseeing the donation, she mentions her family’s traumatic history: they were German Jews who lost several relatives in camps under the Nazis. Morse learns that she knows Hebrew, and asks her to translate two notes: one he found in a wastebasket at the library, and another left in Nicholson’s cubby. They say “truth” and “death,” but Nicholson has said he doesn’t read Hebrew, so they mean nothing to him.

A disastrous event pulls Morse away from the Page case – but then gives him another lead. Residents in the brand-new housing block Cranmer House have been complaining about cracks in their walls, but the councillor in charge of housing, Burkitt, has ignored them – Cranmer House is his proud achievement. Now, Morse is sent there on reports of rumbling. When he arrives, a whole corner of the tower shears off, crushing fleeing residents.

A massive response team is called in, and Bright takes charge of the nightmarish situation. Rescue efforts are coordinated; bodies are lined up to be identified. As Dr. DeBryn does postmortems, he realizes that one of the people did not die in the collapse. The body was found in the basement and must have been encased in the foundations and revealed in the collapse. His hands were bound, he’s been dead about a year, and he was shot by the same gun that killed George Fancy. The only identifying effects are glasses and a case from Dinkley’s, and a keychain labelled “HB.” DeBryn, Bright, and Strange decide to keep this information to themselves and Morse, not even including Thursday, who has begun spending time with the morally questionable Box.

Morse learns from Dinkley’s records that “HB” stands for Hollis Binks. Binks was a surveyor in Councillor Burkitt’s office. Burkitt says he quit about a year ago, but he doesn’t have the resignation letter on hand, and someone else tells Morse that Binks left suddenly. When Morse goes through Binks’s house, he finds contact information for both Page and Burrowes.

Burrowes tells Morse that Binks was a former student of his and a fellow rambler. The last communication they had was about a year ago, when Binks wrote asking about a type of rock and where it could be found in England. Information from a reporter, Dorothea Frazil, points Morse even more surely in the direction of rocks: the company that supplied construction material for Cranmer House has ties to the murdered gangster Eddie Nero and also had a contract for the new police headquarters. The company’s name, Four Winds Aggregate, echoes Page’s note about “wind gods” on his map; their contract with the police may confirm Strange and Bright’s suspicion of a far-reaching conspiracy.

More evidence of the conspiracy quickly accumulates. Bright’s superior calls him to a meeting with Councillor Burkitt and tells him that Morse is digging into complicated affairs that should be left alone. He offers a promotion; Burkitt offers access to experimental cancer trials for Bright’s wife, whose prognosis is grim. Bright refuses. Morse is threatened and warned away by the head of Four Winds, George McGyffin, when he visits the company; two thugs kick his door shut as he leaves. And Strange is offered increased status within his lodge by McGyffin if he stops Morse from investigating.

But Strange, ever on the hunt for the gun that killed Fancy, has looked through old police files and found a case involving the gun in 1964. It was owned by Box.

Thursday catches wind of his colleagues’ investigation, and asks Morse what they’re up to. Morse doesn’t say, but tells Thursday that he hopes he’s still on the right side.

Losing the trust of his former colleagues finally pushes Thursday to make things right. Win has asked him for a divorce in the wake of his offer of extra cash – cash she guesses he obtained in an unsavory way. Thursday finally realizes she’s not looking for money but for the return of his upright character. He gives all the bribes back to Box and tells him he’s filing for a transfer.

The Teagarden granddaughter who is overseeing the bequest calls Morse with a new finding: photocopies of letters in the bequest about her grandfather’s brother Emil, a brilliant physicist who died in a labor camp. The letters describe how Emil had met Nicholson before the war while lecturing at Oxford, then smuggled his notebooks out of Germany to Nicholson during the war. Nicholson was supposed to arrange for Emil’s family to come to England, but they were turned away at the embassy; Emil felt he had been betrayed.

Emil’s daughter, Debra – also known as Dora – had fallen in love with Burrowes before the war, when he was on a rambling trip through the continent. She, too, died in the camp. Burrowes discovered the letters while cataloging the bequest and realized that the love of his life could have been saved, were it not for Nicholson. Burrowes decided to embark on an intimidation campaign, leaving the notes and writing “Dora” on Nicholson’s blackboard to haunt him and make him pay for the betrayal.

Nicholson explains that he didn’t betray Emil; rather, he failed him and was unable to get him asylum. He destroyed Emil’s notebooks because they were flawed; Emil must have had a breakdown that affected his work. Nicholson couldn’t save his friend’s life, but he could save his reputation.

Bright needs saving of his own when he is cornered by two thugs from Four Winds on the street. Both are wielding knives. Luckily, a group of schoolchildren has recognized Bright from his traffic commercials and run up to ask for his autograph. The men disappear.

Morse has realized the men and Four Winds are responsible for the murder of Page – when they kicked his door shut, they left a muddy boot print like those in the library and Page’s rooms.

Meanwhile, McGyffin again tries to turn Morse off the investigation by having Box bring Thursday to see him and Burkitt. They blackmail Thursday with their knowledge of his brother’s fraudulent business and ask him to rein Morse in. Thursday turns on Box, who admits that he wants to get out of all this but is in too deep, his overseers are too crafty.

Morse decides to take Thursday into his confidence and reveals what he has deduced. Page was looking into the disappearance of his fellow rambler, Binks, who had been investigating Four Winds after noticing oddities in the material they supplied to Cranmer House. McGyffin was adulterating the material with cheaper sea sand but charging full price. The salt in the sand corroded the steel supports in the building, thus causing the collapse. Binks and Page got too close to figuring this out and were murdered.

Thursday orders Morse to drop the investigation. He returns home, apologizes for everything to Win, then writes her a letter and leaves.

Morse is on the phone with DeBryn when he hears a struggle. He goes to DeBryn’s office and finds it empty, DeBryn’s cracked glasses on the floor.

Morse goes to Four Winds’ offices to rescue DeBryn. He is confronted by the leaders of the conspiracy: McGyffin, his thugs, and Jago, Box’s secondhand man. Box has not been leading the crime ring; Jago has. After Eddie Nero’s death, he took over all Nero’s businesses: the laced heroin that has been killing addicts, the protection racket, Four Winds. Jago is the one who killed Fancy and Nero.

Reinforcements arrive: Thursday, Strange, and Bright. Jago plans to kill them all and frame them as the corrupt officers. But Bright has called in his traffic cops, over whom Jago has no influence, so Jago and his henchmen flee.

The detectives chase them. Thursday finds himself with Jago’s gun pointing at his face. Morse appears and points his gun at Jago. Box shows up and shoots. Jago falls to the ground. Box collapses, wounded from Jago’s shot. The criminal racket has died with Jago.

DeBryn is rescued. Councillor Burkitt is deposed, as is Bright’s superior. Bright is now head of the police division; Strange and Thursday are given promotions. Win forgives Thursday. And Morse buys a house.