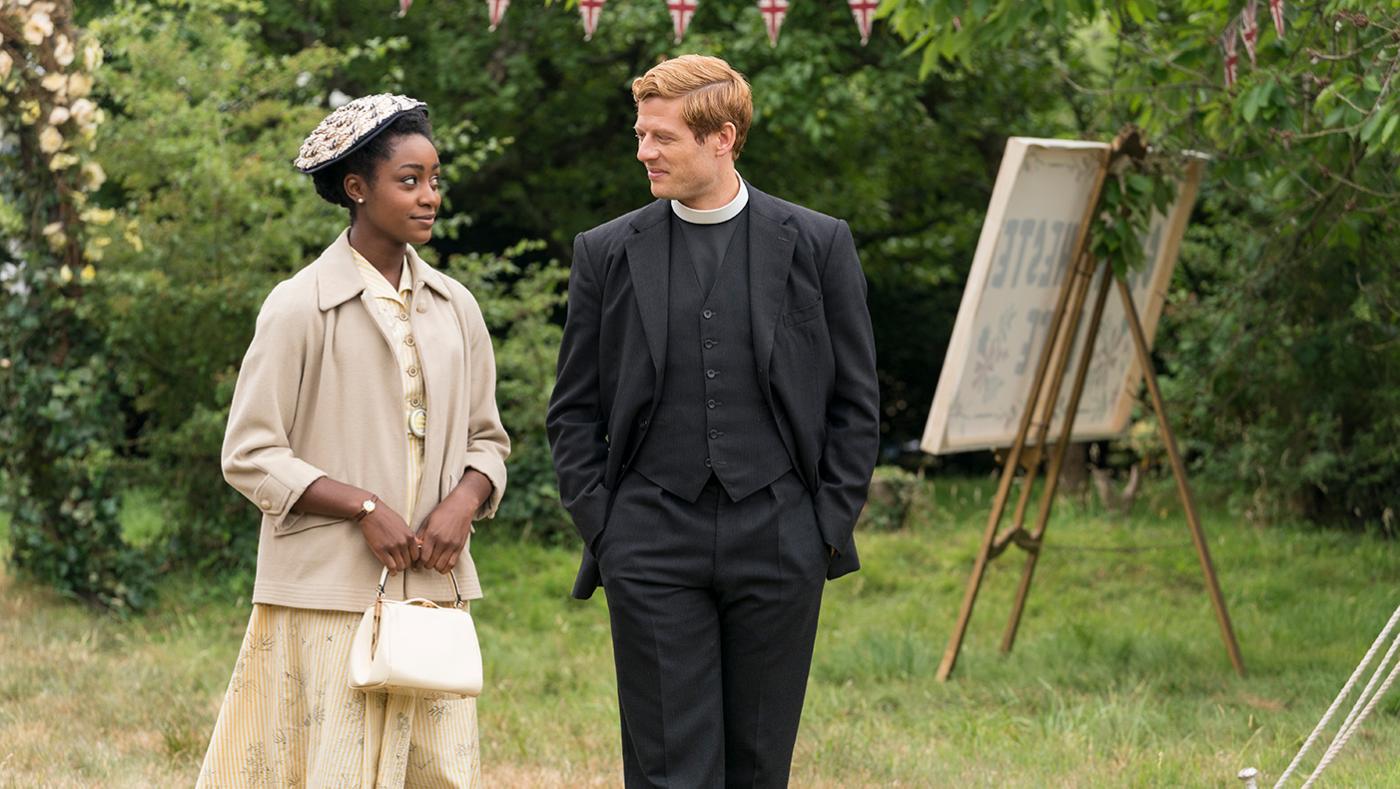 Sidney is instantly smitten by Violet Todd, but she is under threat. Photo: Colin Hutton/Kudos and MASTERPIECE

Grantchester airs Sundays at 8:00 pm and is available to stream. Read our recaps of the previous season and the second part of this episode.

Geordie thinks things used to be better in the old days, before Elvis and rock and roll, and before his wife Cathy took on her own work, leaving him to do the chores; the times are changing too fast. But there’s a bigger, more personal change coming that will upend Geordie’s life more than any cultural force by the end of this two-part episode: Sidney is going to leave Grantchester.

But why? It starts, as it often does, with a girl. The Reverend Nathaniel Todd, an African American minister from Alabama, has arrived in Grantchester to speak about the struggle for civil rights. With him are his children, Charles and Violet, and an assistant, Robert Deveaux. When Sidney arrives with Leonard at the home of Professor Henry Barkley, who is hosting the Todds, for a pre-talk reception, he is instantly smitten by Violet – but first he meets the dashing young cleric Will Davenport, who, like Sidney, is viewed by the dean as a “liability.”

As everyone moves from the reception to the church for the Reverend Todd’s talk, they pass through racist protesters. In the midst of the talk itself, a young man stands up and begins hatefully spouting Bible verse. Loud cracks go off, and everyone rushes to an exit as the protesters begin to move into the church.

The explosions may have just been fireworks, but more deadly work was done. Outside, Charles falls to the ground, bleeding from a stab wound in his chest. By the time the police and an ambulance arrive, he is dead. 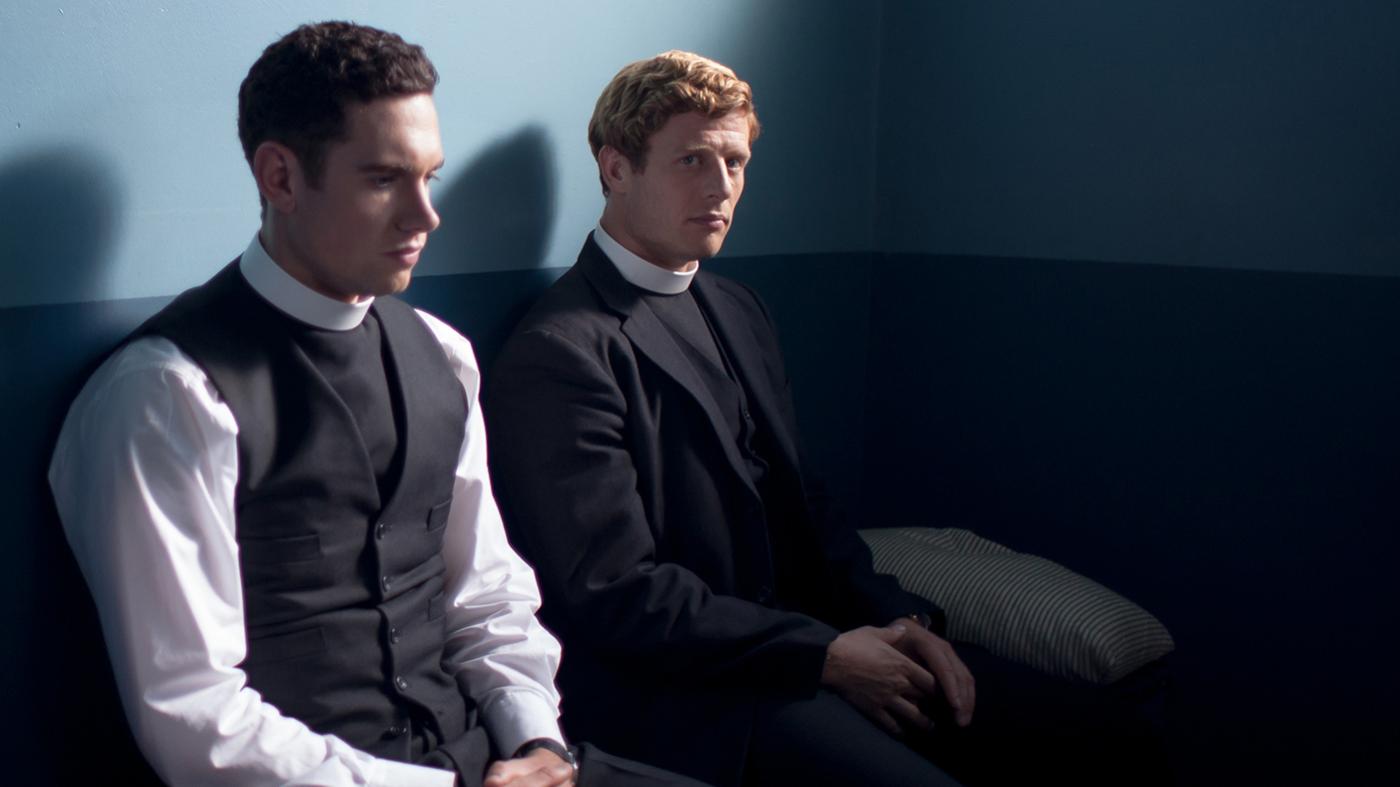 Like Sidney, Will Davenport is viewed as a "liability" by the dean, and he is soon drawn into Geordie's orbit.. Photo: Kudos and MASTERPIECE

Robert and Charles had wanted the Reverend to cancel his talk. He had been receiving threatening letters from one “Phineas Society” – the Biblical Phineas killed a man and a woman from different tribes for “intermingling.” Turns out the letters were being sent by the young man – Gregory Jones – who heckled Todd during his talk.

Jones is a student of Professor Barkley’s, and he claims the Phineas Society is secret and powerful – but really, he is the only member. He admits he started it to impress girls – and he’s clearly also animated by racism. He was invited to the talk by Barkley, who wanted to stimulate debate – or cynically drum up more money for the cause. But Jones says that he didn’t write one of the letters, one that specifically threatens Violet.

Geordie wants to the Todds to cancel their tour, or at least assign them police protection. But they distrust the police, and Professor Barkley continually accuses Geordie of trying to silence the Todds rather than protect them. Robert, however, agrees with Geordie: the tour should be canceled. A compromise is reached: Sidney will stay at the Barkleys as protection while the Todds are there.

That evening, someone carves a cross – the symbol of the Phineas Society – into the wall of Violet’s bedroom and leaves a knife on her bed. Sidney convinces the Todds to stay the night at the vicarage – and he and Violet end up sleeping together.

A new clue comes from an unlikely source: Will Davenport has the bloody knife used to murder Charles, but refuses to reveal who gave it to him, since it was given to him in confidence as a priest. Geordie puts him in a cell, and sends Sidney in to convince him to share his knowledge. Sidney promises that Geordie is a good, trustworthy man, and Will finally agrees to tell Geordie his information: Robert Deveaux gave him the knife, saying it had been slipped into his pocket at some point. 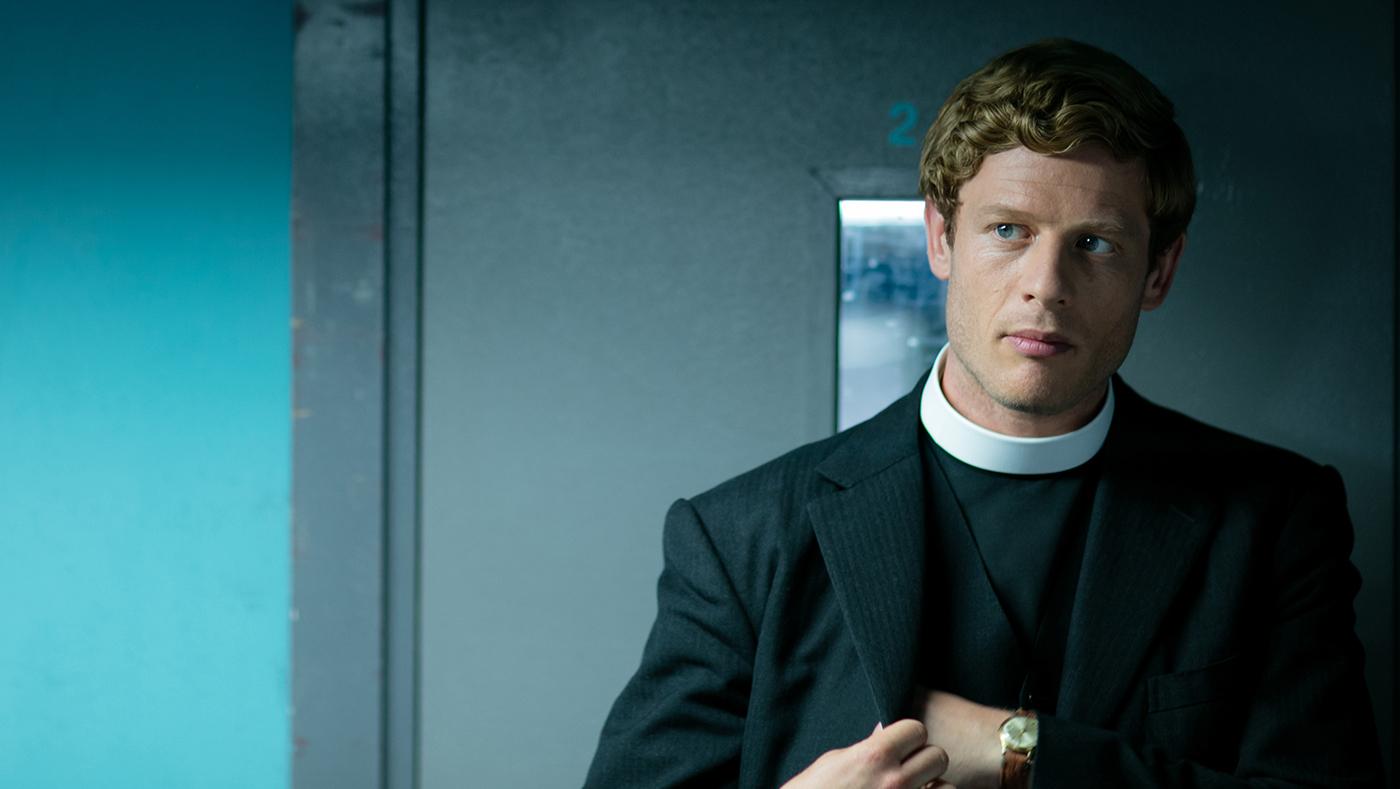 Sidney is becoming personally intertwined with the murder case because of his attraction to Violet. Photo: Kudos and MASTERPIECE

Upon speaking to Robert, Geordie and Sidney realize that he must have been the one who wrote the letter threatening Violet and carved the cross in her room: the letter spelled “colored” without a “u,” in the American way, and no one but the people in the Barkley house knew about the Phineas Society. Robert confesses; he fears for the Todds’ safety, and wanted to get them to return to the United States.

Sidney soon comes to another realization. Violet – with whom he has been spending lots of time, discussing prejudice and the way Robert and her father dismiss her because she’s a woman – told him about dancing at the Barkleys the night they first arrived, and how Charles danced with Professor Barkley’s wife, Madhia. Sidney suddenly picks up on the professor’s jealous guarding of his wife.

Sidney goes to Barkley and asks him about the dancing, taunting him over his envy. Barkley attacks Sidney, who then accuses the professor of murdering Charles in the chaos of Reverend Todd’s talk out of jealousy. Geordie arrives and arrests Barkley before he beats Sidney any more.

The murderer apprehended, Sidney has the opportunity to fall even more in love with Violet. After Leonard reads an embarrassingly earnest poem at the local fete – he’s loving his new relationship with Daniel – Sidney is called up to stage to give the blessing. He sends Violet up instead, giving her the platform her father and Robert have denied her, to speak about racism and civil rights.

After Violet and her party leave the next day, Geordie finds Sidney drunk in a church pew, despondent over the loss of a woman he loved.