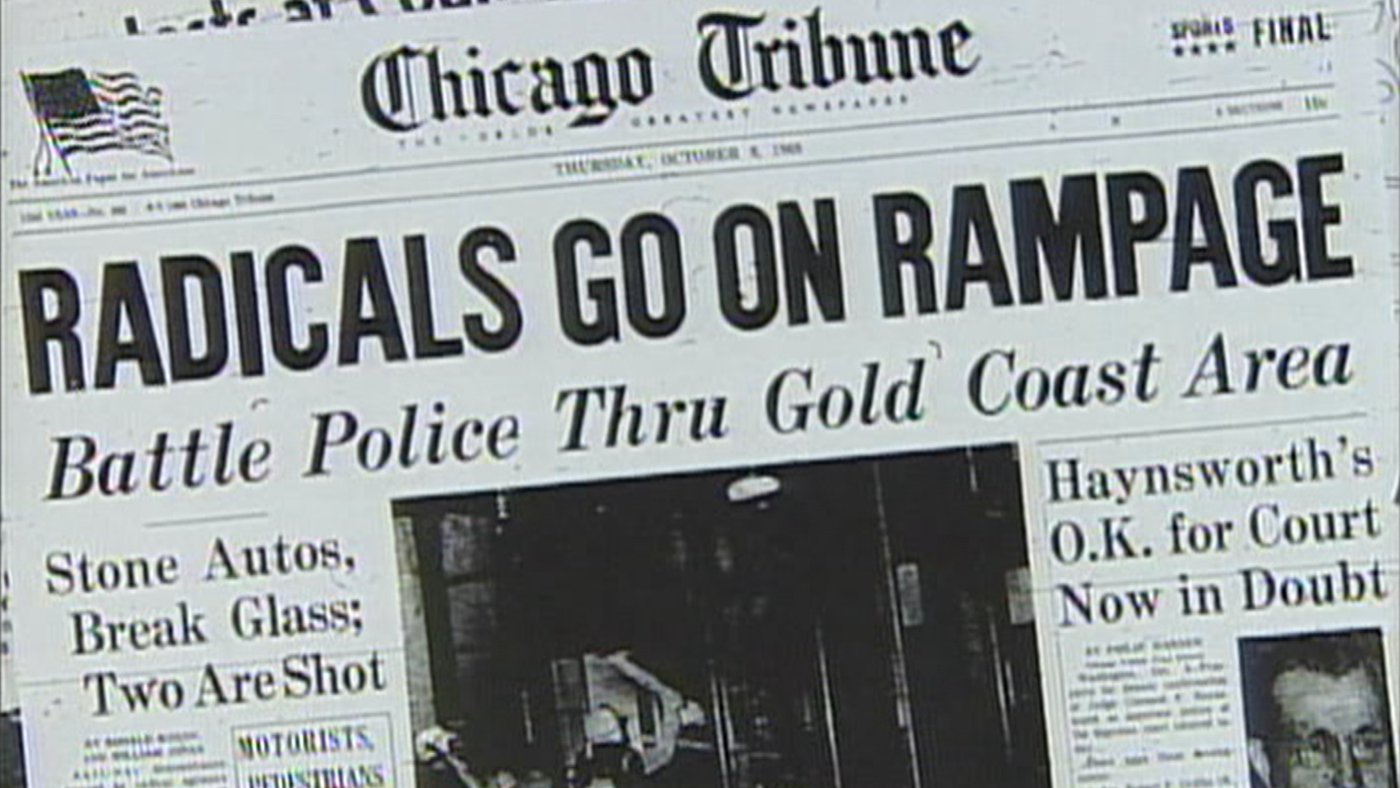 The Chicago Tribune from October 8, 1969, with a headline about the Days of Rage. Image: From WTTW's Chicago Stories

Chicago in the late 1960s was a battlefield. The assassination of Martin Luther King, Jr. on April 4, 1968 set off riots in cities across the United States; Chicago’s West Side was devastated, and Mayor Richard J. Daley issued an infamous “shoot to kill” order against arsonists. A few months later, chaos again erupted during the Democratic National Convention, with a clash between protesters and the police eventually termed a “police riot” by a national commission.

1969 appeared to bring a lull, until the start of a conspiracy trial against organizers of the Democratic convention protests opened a new front in the battle between the counterculture and the “establishment,” this time in the court of public opinion rather than on the streets. As the defendants sought to ridicule and indict the government as embodied by Judge Julius Hoffman in the courtroom, another group of young people decided to adopt a more radical approach to protest the government and the continuing conflict in Vietnam. They would “bring the war home,” in four “Days of Rage.” 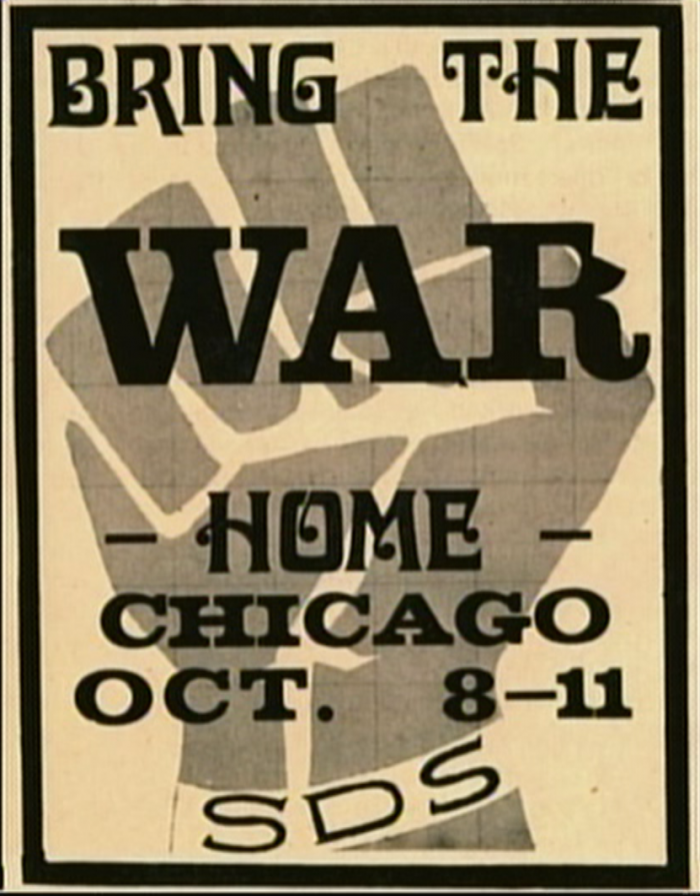 A Students for a Democratic Society poster advertising the 1969 Days of Rage in Chicago. Image: From WTTW's Chicago Stories “Every day that the war [in Vietnam] went on, two thousand innocent people would be killed,” Bill Ayers, an organizer of the Days of Rage, told WTTW decades later. “So there was a kind of urgency that took over. And in that context we faced each other and tried to figure out, what do you do to end a war? How do you stop it?”

Ayers and his fellow demonstrators were members of the activist organization Students for a Democratic Society, but were beginning to split from the rest of SDS. They called themselves the Weathermen, after a line in the Bob Dylan song “Subterranean Homesick Blues”: “You don’t need a weather man to know which way the wind blows.”

The Weathermen felt that the more peaceful tactics of other factions of SDS were not achieving results, so they planned to have thousands of people come to Chicago just two weeks after the start of the Chicago Eight conspiracy trial for “a huge outpouring of militance, of young people,” Ayers said. “We felt that we ought to call a demonstration in which we weren’t contained and controlled.”

But when the Days of Rage began, the Weathermen found they had far less support than they realized. When they gathered on October 8, 1969, in Lincoln Park to begin their violent demonstrations – some wore football helmets and shoulder pads, while others carried steel pipes, chains, slingshots, or baseball bats – only a few hundred people showed up, instead of the fifty thousand they had hoped for.

That first night, the demonstrators marched south towards the Drake Hotel, where Judge Hoffman lived, breaking the windows of cars and storefronts along the way. After they charged police barricades, the police put down the riots with their own counterattacks, using tear gas, nightsticks, and guns and cars (while some Weathermen were shot and police were also injured, no one was killed).

“The thought of the Chicago Police Department and the mayor of the city of Chicago was to try to avoid confrontation,” Richard Elrod, a state legislator and attorney for the city who had been tasked with handling the riots, told WTTW decades later. Ayers disagreed: “I don’t think the police or the city learned a thing between ’68 and ’69” – the police had been widely criticized for their handling of the Democratic convention protests the previous year. 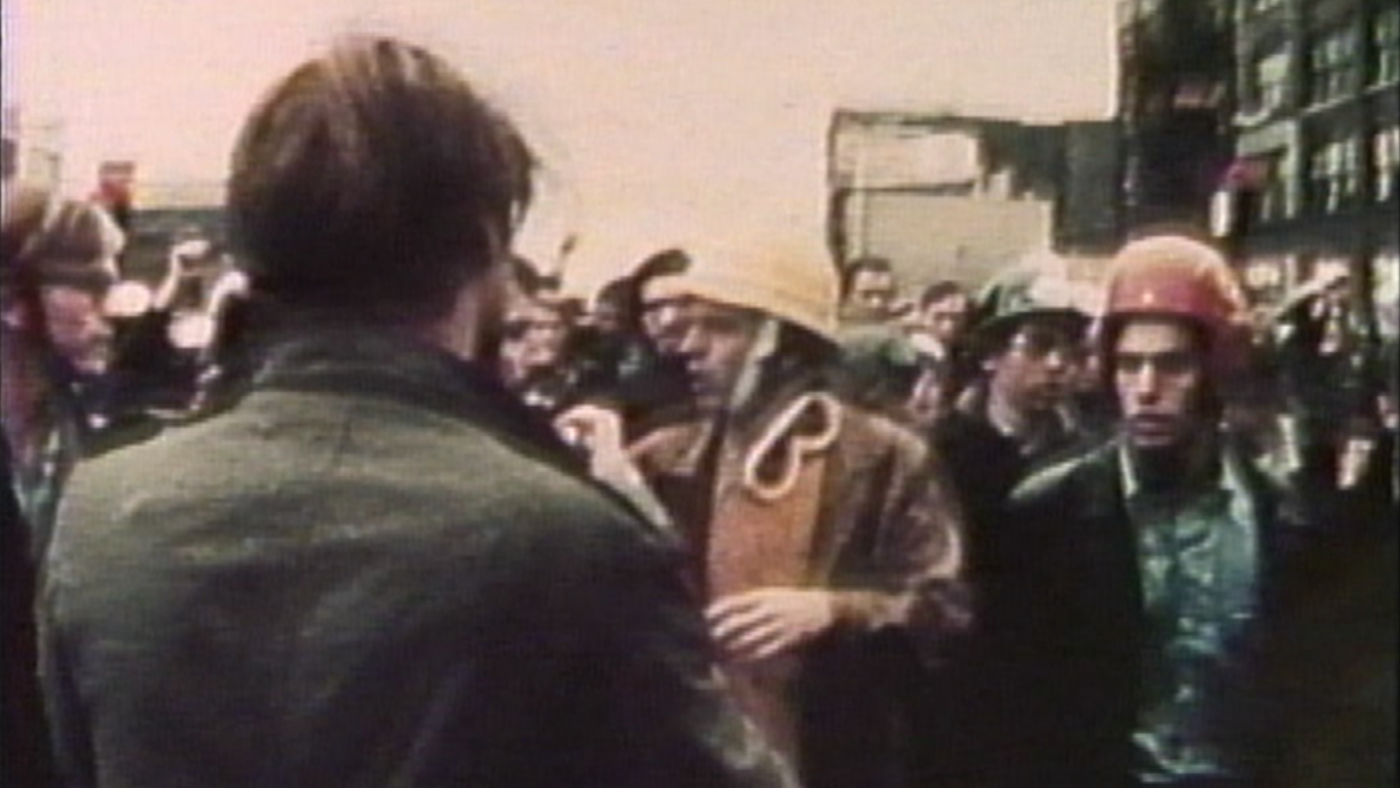 Other activists criticized the Weathermen’s tactics. “We thought it was off the wall,” Carl Davidson, a leader of SDS, told WTTW. “We thought it was silly, counterproductive, that it wasn’t going anywhere. That’s the best we thought of it.” Another faction of SDS organized peaceful marches along with the Black Panthers to protest the Vietnam War and enduring racial inequality, drawing thousands of demonstrators – but it was the smaller, violent Weathermen actions that drew news coverage.

Even Ayers later expressed doubt about the riots: “I don’t think that the Days of Rage was a particularly smart or effective tactic,” he told WTTW. “I think it was a very difficult time to know what to do, but we were determined to see through our strategy of militant opposition and trying to mobilize all of the militants to come to Chicago to display their anger, their outrage, and their deep opposition to this war. That was a colossal failure, in the sense that we didn’t mobilize lots of people to come.”

The second and third Days of Rage were more muted, but on October 11, the Weathermen rallied at a statue of a policeman that they had bombed in the days leading up to the Days of Rage and headed into the Loop. Once again they clashed with police, in what a retrospective Chicago Tribune article from 1994 called a “vicious melee that resulted in nearly 300 arrests, 48 police injuries and unknown more to protesters.”

During that confrontation, Richard Elrod broke his neck, leaving him paralyzed from the neck down (he eventually regained movement but remained partially paralyzed). Elrod said he tried to tackle a 22-year-old protester named Brian Flanagan, who then kicked him in the neck with steel-toed boots. Flanagan, who was eventually acquitted of all charges, claimed Elrod hit a concrete wall when he dove at him. Elrod was elected Cook County sheriff the following year, and later became a Circuit Court judge. 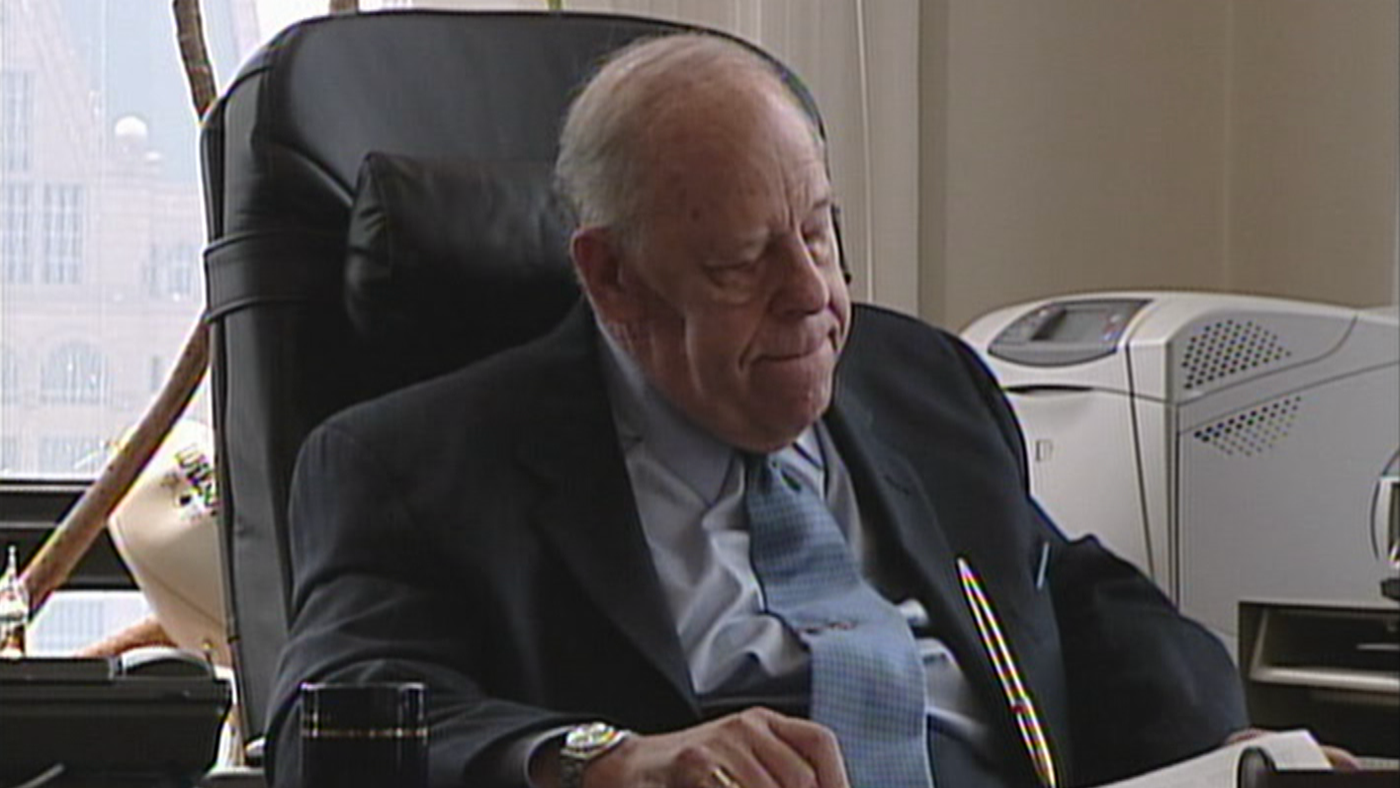 Former state legislator and Cook County sheriff Richard Elrod, pictured here in the early 2000s, had his neck broken during the Days of Rage. Image: From WTTW's Chicago Stories

With that confrontation, the Days of Rage ended. The Weathermen had, in some ways, “brought the war home,” but their protests may have bolstered the reputation of their enemies the police, and hurt the causes they espoused by associating anti-war and anti-racism protests with violence in the eyes of the public. In a long magazine feature unabashedly sympathetic to the police and the city that ran the month after the Days of Rage, the Chicago Tribune claimed that “the police, widely condemned scarcely a year ago for their conduct during the Democratic convention, had never enjoyed so much public acclaim.”

Several months later, the Weathermen went into hiding, after three of their leaders were killed in New York City when a bomb they were making accidentally exploded. Over the ensuing decades, people who had taken part in the Days of Rage surrendered to authorities: one of the last, Jeffrey David Powell, did so as late as 1994, receiving a fine and 18 months’ probation. Ayers surrendered in 1981, at the same time as his wife Bernardine Dohrn, another Weatherman. While she was fined and received probation, the charges against Ayers, the son of a Commonwealth Edison president, had been dropped because of illegal FBI tactics used against him. He later became a professor at the University of Illinois at Chicago, and briefly received national attention again during the 2008 presidential election because of contacts with Barack Obama. Dohrn became a professor at the Children and Family Justice Center at Northwestern University’s Law School.

The Days of Rage had faded from memory. But, as the Chicago Tribune wrote when Powell surrendered, “the Days of Rage symbolized a marked fissure in American society, the end of the carefree ‘60s, when rich, white college kids clashed with police, their parents, the government in protest against the Vietnam War, racial intolerance and just about everything else that had served as the status quo.”