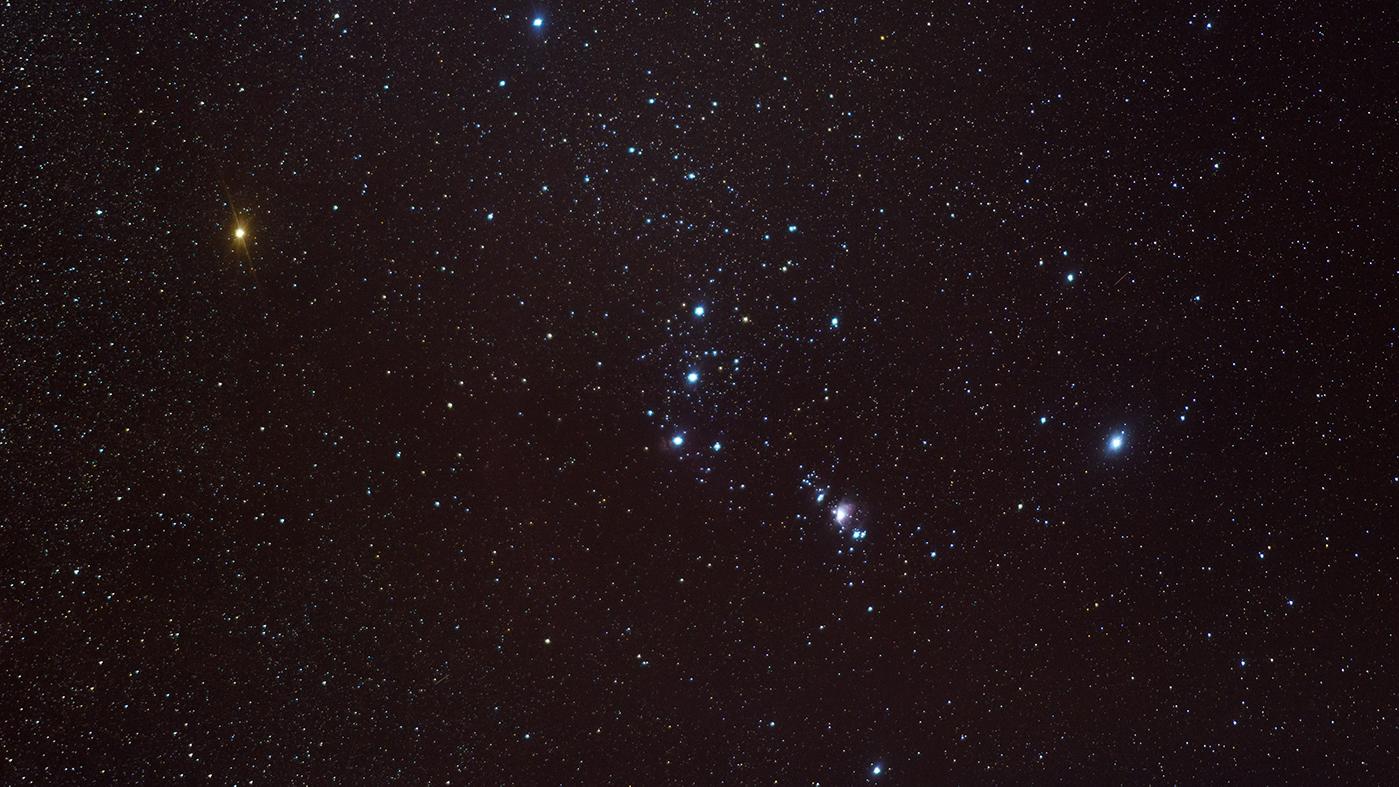 The constellation Orion, with Betelgeuse the reddish star in the top left.

The shoulder of the mighty huntsman Orion has weakened. Betelgeuse, the bright red star that marks the top-left corner of the constellation Orion’s torso, has recently dimmed—so much that the change is evident to the naked eye. “If you look up at Orion, Betelgeuse is noticeably dimmer than Rigel,” the brightest star in the constellation, says Geza Gyuk, the Adler Planetarium’s Director of Astronomy. “It used to be just a little bit less bright. Now, it’s no longer even a first-magnitude star”—a category that includes the twenty brightest stars in the sky. Betelgeuse is usually the twelfth-brightest star in the sky; it’s currently twenty-first.

There have been suggestions that this noteworthy dimming is a sign that Betelgeuse will soon go supernova, exploding in a magnificent end to its life. If this were to occur, the dimming trajectory would be drastically reversed: the supernova would be the third-brightest object in our night sky, after the sun and full moon, casting shadows on Earth at night. It would be the closest supernova people on Earth would ever witness.

But it’s unlikely that the dimming of Betelgeuse is an imminent harbinger of a supernova. As a red supergiant that is about 10 million years old, Betelgeuse is nearing its demise...which will most likely come in about a hundred thousand years. “Betelgeuse is doomed to die in a supernova, there’s really no way out for it,” says Gyuk. “It’s just a question of when. Our best estimate is sometime in the next million years, probably the next hundred thousand years.” It’s not that long in the span of a star’s life. “Relatively soon,” Gyuk adds with a laugh.

As the name “supergiant” suggests, Betelgeuse is a massive star, about fifteen times more massive than the sun, according to Gyuk. Size-wise, it’s even larger: if it was located where the sun is, its outer surface would be near the orbit of Jupiter. Massive stars run through their mass more rapidly than smaller stars, so their lifespan is much shorter—about a thousand times shorter, if you compare Betelgeuse with the sun.

As a massive star depletes its mass, particularly the hydrogen fuel in its core, it begins fusing heavier elements, working its way up through carbon, oxygen, neon, and more via thermonuclear burning. “Eventually it’s going to have these sort of shelves of material, and the very core is going to be composed of iron,” Gyuk explains. “It will burn silicon to iron very, very rapidly, in just a day or so. At that point, the iron core will grow and grow.” Because it takes more energy to burn iron than the iron releases in thermonuclear burning, when the star tries to fuse its iron core, “suddenly it will suck all the energy out of the interior of the star,” Gyuk continues. “You won’t have any heat or pressure to support the rest of the star, and gravity will take over. The whole central core will collapse into essentially a neutron star.

“All that energy of inward falling is a tremendous amount of energy: it’s like dropping something from a high height. At that point it will suddenly stop, and all the outer layers—which will be moving as fast as a third of the speed of light—will slam onto the surface of the core and bounce off and explode the star. That’s the supernova explosion.” A Betelgeuse supernova would be bright in the night sky for several months, as the material of the star cools down, decays, and is dispersed. “And then after that it’s going to fade away and disappear, and we won’t have a star in the shoulder of Orion any more,” says Gyuk.

While an immediate supernova of Betelgeuse is unlikely, according to Gyuk, the star is incontrovertibly dimmer—why?

To start, Betelgeuse is what’s known as a variable star. “We think of stars as these constant things, but a lot of them actually vary,” explains Gyuk. In the case of Betelgeuse, “the average density is incredibly low—it’s much less than that of air—so it’s sort of floppy, and the surface gravity is really low, too. Betelgeuse is large enough and close enough [to Earth] that you can actually resolve the surface of the star with advanced telescopes. And you can see that it’s not perfectly circular, it’s a little lumpy. And it has dark patches and light patches: there are huge amounts of convection going on inside Betelgeuse, where the energy from the inside is bubbling out, pushing the gas around. So there’s a certain instability to it.”

While the star’s current dimming is greater than what is typically expected, it is likely the result of a concurrence of several different processes that cause variability. The instability that comes from the “bubbling” convection currents could be combining with other phenomena. “Supergiants like this are expected to release a lot of dust and lose a lot of mass,” Gyuk says. A large cloud of dust could have moved away from Betelgeuse and could be blocking some of the light.

The unusual dimming of Betelgeuse could contribute to our knowledge of stars. “It helps us understand how solar variability works for these red giants, and that helps us understand things like mass loss,” Gyuk explains. “That’s particularly interesting because stars like this may put out dust, and the dust is typically composed of carbon and things like that. And that carbon is probably where we get the carbon in our bodies from.”

When the universe was born, “it was composed essentially entirely of hydrogen and helium,” Gyuk says. Stars formed and began processing those two elements up to heavier elements in their core, in the same process as that which eventually leads to a supernova in a red supergiant like Betelgeuse. Those heavier elements probably eventually formed planets, but their only way out of a star would be either through the explosion of a supernova or some sort of “mass loss episode,” like the one that could be contributing to Betelgeuse’s dimming. “It’s understanding how these heavier elements get out into the interstellar medium that helps us understand how we got here,” says Gyuk.

But while professional astronomers observe Betelgeuse’s dimming in order to better understand stars, everyone else can simply use it as a good excuse to look up at the night sky. Orion is a winter constellation, so now is a good time to see it and the red star that marks its shoulder. (Gyuk suggests around 10:00 pm as a good time.) It might not be there much longer—probably only some hundred thousand years.