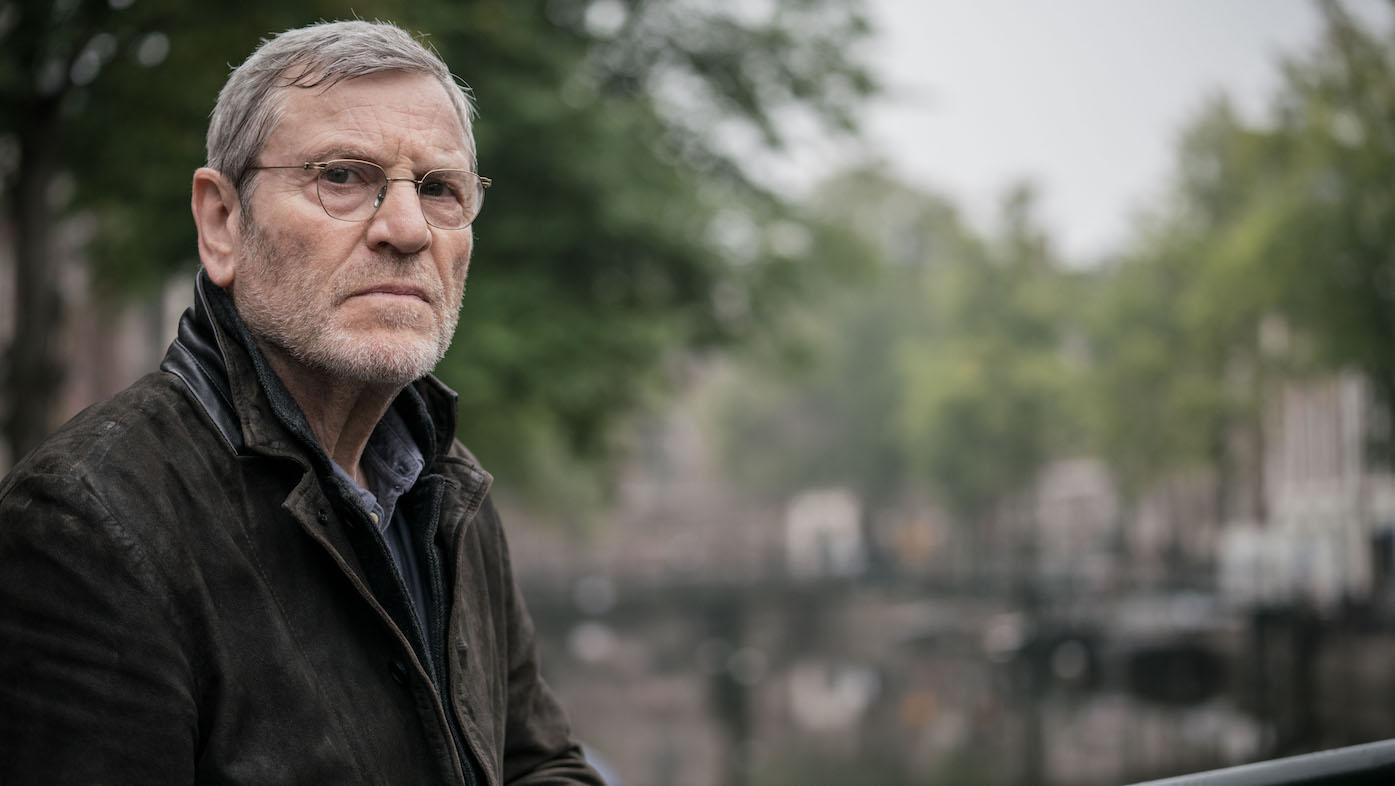 Julien Baptiste is a retired French detective who has been asked to search for a missing girl while staying with his daughter in Amsterdam. Photo: Two Brothers Pictures and all3media international

Baptiste airs Sundays at 9:00 pm and is available to stream. Recap the following episode.

An elderly man walks along a beach on the British side of the English Channel. Arriving home, he finds a man waiting to check the gas meter. As he lets him into his home, he notices that the man’s accent is Romanian. That’s true—but the man’s not there for utilities. He strangles the older man with a bag over his head, rolls the body onto a sheet of plastic, and pulls out a chainsaw.

On the other side of the North Sea, another older man rushes to a flat with groceries for his family. Julien Baptiste is a retired French detective visiting his daughter, her husband, and new baby in Amsterdam with his wife. Amsterdam’s police commissioner, Martha, is an old flame, and she has asked Baptiste to investigate the disappearance of a young woman, despite Baptiste’s insistence that he’s not the man he once was, given his limp and a previous operation to remove a brain tumor.

Natalie Rose is a sex worker; she was reported missing by her uncle, Edward Stratton. Baptiste goes to meet Edward at the hospital—he has collapsed from a panic attack while frantically searching Amsterdam’s infamous red-light district for evidence of Natalie. Over a late-night drink, Edward explains that Natalie’s parents died in a car crash when she was 14; he has taken care of her ever since. Eventually she got into drugs—something Baptiste’s daughter once struggled with as well—and now Edward, who lives in Antwerp, simply does his best to check in on Natalie every once in a while.

Edward believes a notorious Romanian gangster named Dragomir Zelincu knows where Natalie is. She had said she knew the truth about Zelincu, who hasn’t been seen for years, but had to keep quiet.

There definitely is a dangerous Romanian gang about: the man who killed the Englishman is playing pool in a backroom while other men come in and drop off money; when one comes up short, the murderer smashes his head with a pool ball.

This violent man has learned Baptiste is looking into Natalie’s disappearance. He purposefully runs into Baptiste’s wife, Celia, at the store, dropping a recorder into her purse before she leaves.

Baptiste and Edward try to learn more about Natalie from her roommate, Lina, but she won’t talk to them. Instead, Lina visits a woman, Kim, at a coffee shop she runs with her lover—he has proposed multiple times, but Kim doesn’t want to marry—and asks her for help: she was supposed to protect Natalie. How is Kim involved? Who knows—but she does have a secret: daily injections that she hides from her lover.

As Baptiste and Edward search for answers in the red-light district, they notice a boy following them. Edward accosts him, then races after him as he flees. Baptiste manages to cut the boy off. He offers to pay the boy for answers, but is shocked when the boy asks for a huge sum. Nonetheless, Edward pays it. The boy tells them the owner of a transgender brothel, Walter de Louw, asked him to follow them.

Off Baptiste and Edward go to the brothel. Walter says he doesn’t know anything about Natalie or Zelincu—it’s just his business to know what’s going on around the red-light district. That lead may be a dead end, but Kim, the woman from the coffee shop, has reached out to Baptiste. She wants to speak to him.

She tells Baptiste and Edward that she runs a collective to help the sex workers of Amsterdam work independently, saving them from unscrupulous brothel owners. Natalie was part of the collective. She was a junkie who had started stealing to keep up with the drug debts she had accrued with a Romanian gang. Natalie told another woman that she was going to Germany to escape her debts.

Edward is distraught: how are they supposed to find Natalie now? He has to go back to Antwerp for a few days, but Baptiste promises to keep him informed. Late that night, Baptiste has a revelation, and asks the police commissioner for all her files on Zelincu.

From digging through the files, Baptiste has discovered that Zelincu, not Walter, is the true owner of the transgender brothel. He can find nothing about Zelincu in the past few years, while he can’t find anything about Kim, the head of the sex worker collective, from farther back than two years. Baptiste is a cinephile, and noticed a poster of Rita Hayworth at the brothel as well as numerous Hayworth films at Kim’s apartment. Connecting the dots, he has realized that Zelincu and Kim are one and the same; Zelincu has transitioned to Kim.

Telling Kim this, he asks her for real information about Natalie, whom he suspects also found out the truth, rather than the misdirection she gave him. He believes Kim has repented and wants to help sex workers but must keep her old identity hidden, given her checkered past. Kim agrees—but asks that Baptiste tell no one about her past. He promises.

Baptiste calls his wife, Celia, to tell her he won’t be home for a bit: he’s found Natalie. The Romanians, listening to the bug in Celia’s purse, overhear. Baptiste finds Natalie in a boathouse, seemingly unharmed. She tells him Edward isn’t her uncle—he’s not at all who Baptiste thinks he is. Cut to Edward’s Antwerp home, where a shelf in the basement holds the decapitated head of the Englishman, wrapped in plastic.

Natalie seems to be safe; her sister is not so lucky. In a gloomy cell, a group of young women huddle. A man comes in, filming them all on a video call and identifying them with a number. One girl is chosen, and hauled out. Afterwards, two of the women converse. One says her name is Cristina; she was visiting her sister Natalie when she followed a man outside a bar for weed before being bundled into a car and taken here.

A final ominous note: a rural tulip farmer has found a necklace in his fields, and now his dog is digging to discover something else hidden there.