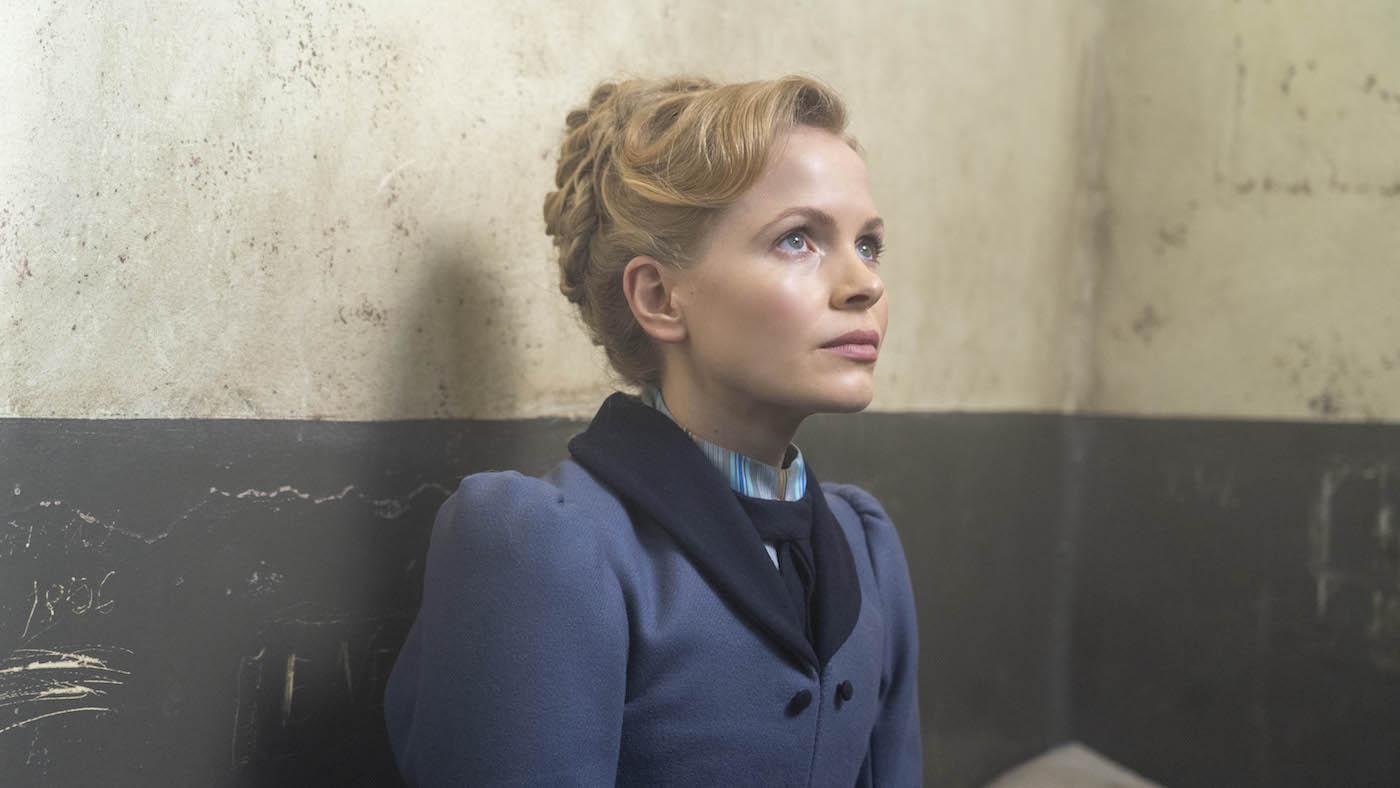 Eliza investigates her final case, which led to his death. Photo: Masterpiece

Miss Scarlet and the Duke airs Sundays at 7:00 pm and is available to stream. Recap the previous episode and following season.

Henry Scarlet sits at his desk, a glass in front of him—but he refuses to drink it, despite everyone’s gibes about his drunkenness. A man in a gas mask points a gun at him, then shows a photo of Eliza. Don’t hurt her, Henry begs, and downs the poison.

Eliza has found out that Henry was investigating a forgery operation when he was killed, his death staged to look natural. Now a witness has been killed: the forger Nathaniel, conscripted into the operation against his will. The policeman guarding him in the hospital was drugged through his cup of tea.

William is furious. When he informs Eliza, under protection at her home, she already knows: she heard from the guards when she took them tea and cake. This is the largest forgery operation Scotland Yard has seen, William says, and some of the bills have already been cashed at banks for gold. William makes Eliza swear she’ll stay inside for her safety.

Rupert arrives to see Eliza about an “urgent personal matter;” eventually, he and Eliza convince William to let him in, as William leaves.

Rupert has a message from Moses, but first enumerates his crisis: Fraulein Hildegard is in love with him and has already proposed marriage after only three days. He was hoping for a long—and long-distance—engagement. Eager for her message, Eliza tells him to just say no to Hildegard.

Eliza goes to meet Moses—but instead finds William waiting. William and Frank have searched Moses’s lodgings, since Nathaniel mentioned a connection to him, and found both a note from Eliza and a bag full of counterfeit bills. William scolds Eliza for associating with Moses, but Eliza doesn’t believe he’s involved with the forgery operation. William also chastises Eliza for leaving her house, but she says the guards had gone—she didn’t even need to sneak out.

Turns out the superintendent dismissed the guards, considering them a waste of resources. William argues with his boss, then turns to investigating the forgery gang. He enlists Eliza to comb through files and they come up with a list of seven possible suspects based on descriptions given by bank managers of the men who withdrew gold using the counterfeit bills.

William will be staying the night at Eliza’s as an extra precaution, and he also pays some men to guard her home. But Eliza receives a covert message at the police station by way of a street preacher: Moses will meet her at her home at midnight. After a parsimonious dinner—Ivy is away, and Eliza doesn’t know how to cook—laced with romantic tension, William falls asleep, and Eliza sneaks into another room to meet Moses.

Moses says William must have planted the counterfeit bills in his lodgings. “I’ve been the wrong man many times,” he says. He shares the address of Nathaniel’s brother, who reported Nathaniel missing but was threatened by someone at Scotland Yard and then expunged from Nathaniel’s records.

Eliza tells William this new information. He locks her in a cell, not trusting her to avoid Moses, and goes to interrogate Nathaniel’s brother, who reveals after some resistance that the superintendent threatened him when he tried to report Nathaniel missing.

William returns to Scotland Yard to find chaos: there’s been a fire in the archive room, and all files on missing persons from the last six months have been burned.

William, Eliza, and Frank decamp to Eliza’s office to show mug shots to bank managers, to try to identify the men who used the counterfeit bills. One manager confidently identifies the Cartwright brothers, mentioning that there was always a subtle smell of excrement about them. Frank mentions that his uncle who worked in a tannery had the same odor.

Eliza, William, and Frank identify an abandoned tannery near all the banks where the counterfeit bills were used, reasoning that the brothers needed somewhere to hide the gold before trying to escape with it. Frank finds Sterling dead there at the bottom of stairs, a train ticket to Liverpool in his pocket. The Cartwrights must have double-crossed him. The police later receive intelligence from Liverpool that the Cartwrights have boarded a boat to New York City.

The case solved, even if the suspects have not been apprehended, William asks Eliza to have dinner with him. She agrees—but first he must apologize to Moses. William and Eliza argue, as they invariably do.

Instead of dinner with Eliza, William has drinks with his colleagues. Frank, utterly drunk, reveals that his wife left him last week. William takes Frank home and puts him to bed, looking for a blanket for his friend.

Rupert visits Eliza, warning her that Fraulein Hildegard is on her way there to yell at Eliza for advising Rupert to refuse her proposal. When she arrives, she shouts at Eliza, telling her she can’t have Rupert—Eliza already has her policeman. Eliza says she’s not involved with William, and Hildegard says no, not him—she saw the beady one (Frank) creeping up Eliza’s steps another night.

In Frank’s lodgings, William opens a closet and finds a gas mask. He turns to find Frank pointing a gun at him. Frank killed Henry for investigating the forgery operation, pretended to be the superintendent to Nathaniel’s brother and then killed him, framed Moses, and killed the Cartwright brothers so that he would get all the money.

Eliza appears and tries to reason with Frank. As she delays, Moses arrives and knocks Frank out.

William reluctantly thanks Moses. As they leave, he and Moses shake hands, “for [Eliza’s] sake.” They’ll leave each other be in order to help their beloved female friend.

William once again asks Eliza to dinner and she says yes. They have to go quickly, before they argue and derail the whole thing.