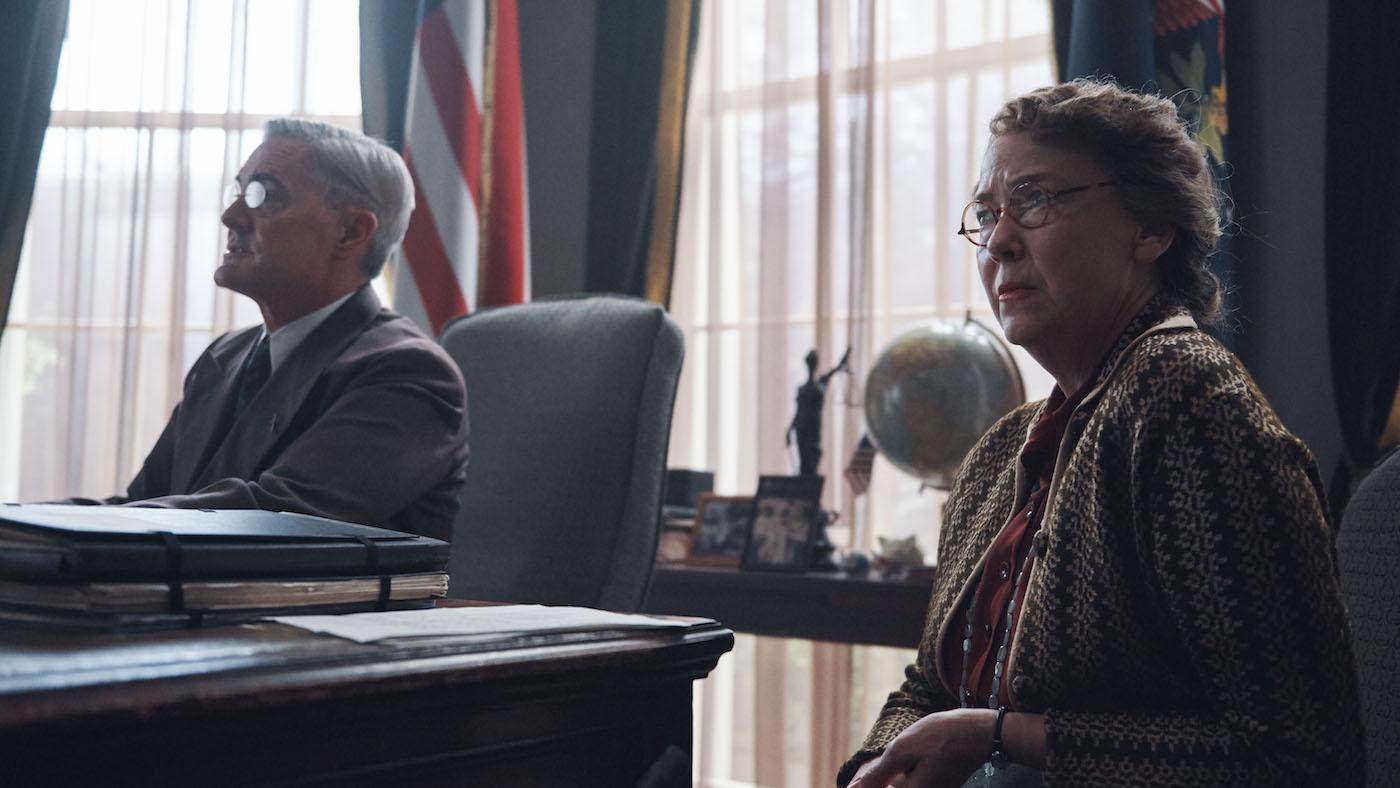 FDR and Eleanor have different views on how the United States should respond to the war in Europe. Photo: Masterpiece/Julie Vrabelová

In a radio address, FDR promises the nation that the United States will remain neutral in World War II. He’s running for reelection, and the public is against joining the war.

While he is confident and assured in front of an audience, Märtha is nervous and self-doubting. When she stands up to give a speech written for her by the ambassador Morgenstierne at a Norwegian church, her nose begins bleeding as she stares at the crowd in the pews. She rushes away without saying a word.

But while FDR projects conviction in public, in private he is more conflicted. He would like to help defeat Hitler, he confides to Märtha, but he must be reelected—there is no viable alternative Democratic candidate, and his opponent Wendell Wilkie is a neophyte who wouldn’t be able to handle the war. The nation is against intervention, so FDR must be too—for now. Märtha is affronted by the contrast between his personal beliefs and his public politics.

The president is visiting Märtha at her new home in Washington, D.C., bringing her flowers. He opens up about the challenges his polio-paralyzed legs present, then asks her about eventually becoming queen—something no one else has asked her.

The conversation is interrupted by a phone call from London: Olav. He asks Märtha to set up a dinner between FDR and Morgenstierne—a request Morgenstierne has also made. Märtha is reluctant to take further advantage of the president after all his kindnesses, but finally agrees to try.

Alas, FDR is leaving when she gets off the phone: he has work to do. He tells Märtha that it’s nice to talk to someone without a hidden agenda—until she brings up meeting with Morgenstierne. He is forgiving of her request, but refuses: every European ambassador wants to meet with him in the hope of buying munitions, but the Neutrality Act prevents the U.S. from selling them to anyone in the war.

Morgenstierne is disappointed at the failure to set up a meeting, but not more than Märtha. She feels that she is useless.

She is stirred to action by an encounter at the Norwegian church after FDR wins reelection. Learning that a sailor there lost his legs when his ship was torpedoed and has been separated from his family in Norway ever since, she goes over to thank him for his service. He berates her, angry that the government and royal family fled Norway. “You should be ashamed,” he shouts.

Märtha decides to visit him at the hospital where he lives. She shares a report she has received on his family in Norway: they are all well. He cries. As she leaves, he tells her that the Americans are Norway’s only hope.

She again goes to Morgenstierne and tells him that, while she can’t get him a meeting with FDR, she can be a conduit to him. Make your case to me as if I were the president, she says, sitting behind his desk with a notepad. She studies up and memorizes the arguments.

Newly confident, she walks into a meeting between FDR, his wife Eleanor, and his advisor Harry Hopkins and makes a request: Norway wants to buy munitions from America. FDR again says he can’t because of the Neutrality Act, but Märtha brings up a “trade” of munitions the U.S. made with Great Britain. She appeals to his convictions, regardless of voter opinion. Her home was once on fire, she tells him, and her neighbors came to help—both because they were good and kind but also because they knew that fire will spread.

It is Christmastime, and Märtha and her children have a delightful surprise: Olav has arrived, along with Nikolai, who has a letter from Ulla and Rolf, his and Ragni’s children, saying that they are well. Unfortunately, Olav and Nikolai will not be staying for long—Haakon does not like having Olav far away, and he must remain in Europe while the war continues.

Christmas Eve is celebrated at the White House in grand style. FDR gives the Norwegian children a puppy, to replace their missed dog back home. He has a gift for Märtha and Olav, too. He is introducing a bill in Congress that will allow him to circumvent the Neutrality Act and lend or lease arms to European allies. Eleanor, Hopkins, and FDR’s secretary Missy are against the idea, but Märtha passionately defends it, impressing Olav.

After the guests depart, Eleanor accuses FDR of being infatuated with Märtha. She doesn’t care about his romantic entanglements, she tells him, as long as they don’t affect his political decisions, as they seem to be with the lend-lease bill. He denies it.

His speech announcing the bill seems to belie that denial, however. He adapts Märtha’s burning house metaphor to argue that the U.S. should lend its allies a garden hose to douse the fire lest it spread. He also brings up Norway as an example of the difficulty of staying neutral: no matter the country’s professed status, Germany still invaded.

Olav and Märtha are heartened by the victory on behalf of the Allies, until they get a taste of the American public’s response to it. Outside a television store showing FDR’s speech, a crowd begins chanting “America First,” and a man throws a rock through the window.