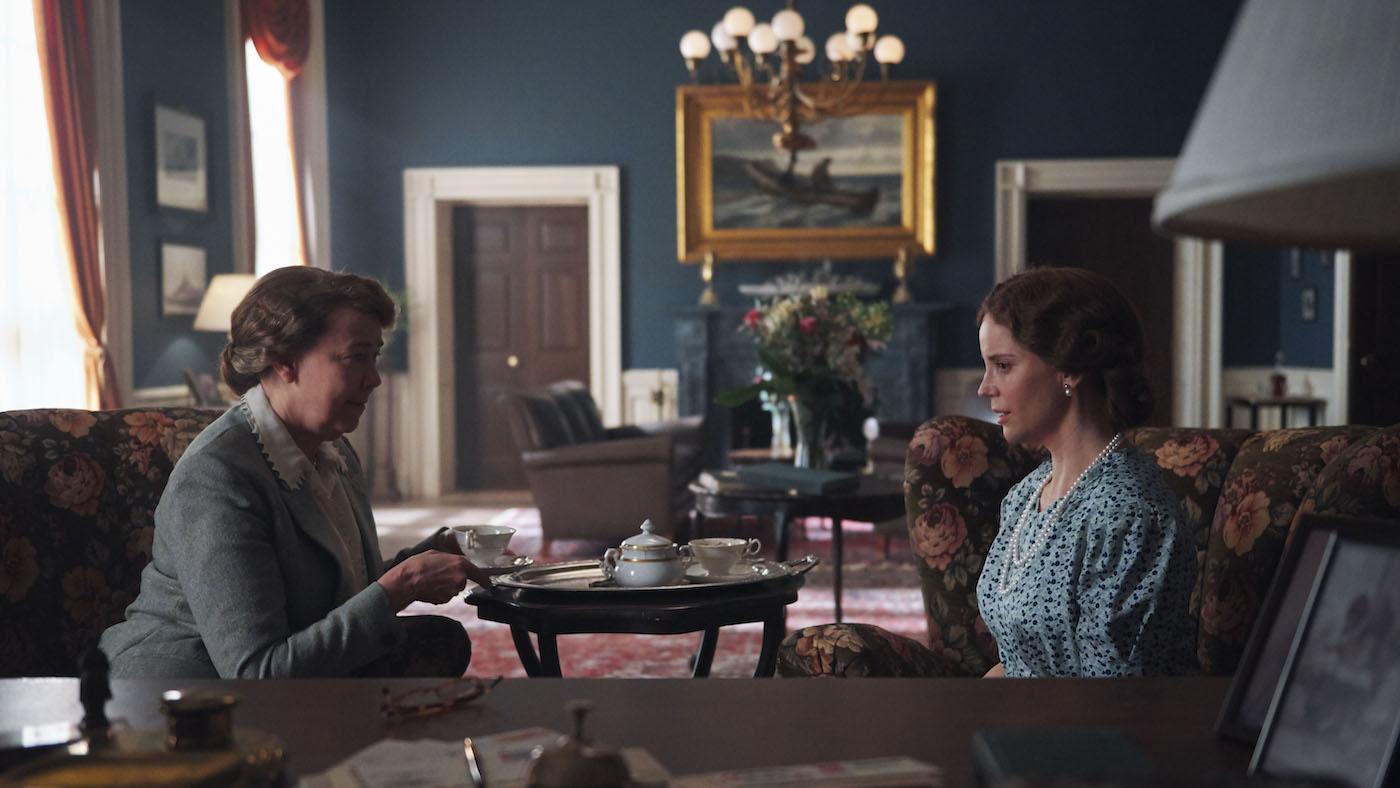 Märtha goes to Eleanor for public speaking advice as she raises her profile. Photo: Masterpiece

As people protest the lend-lease bill outside the White House despite FDR’s contention that it will create more jobs—Eleanor, however, thinks the bill a bad idea—Märtha hosts a dinner party to rally support for the bill among congressmen. Olav works the politicians but finds even the Norwegian American ones to be skeptical.

But Märtha has enlisted help. At dinner, she invites in a guest of honor: the sailor she met at church who lost his legs when his ship was torpedoed. He speaks passionately about his experience, urging the United States to support Norway and the Allies in Europe. After he angrily bangs the table, FDR begins a round of applause for the sailor.

Märtha’s plan seems to have changed some congressmen’s minds, but Olav is unhappy that she didn’t warn him about her “gimmick.” She retorts that he can make decisions about guests in her house when he’s living there, with his family, full-time.

She receives a further slight after the bill is passed, when Morgenstierne toasts Olav for his work in garnering support for it but doesn’t mention Märtha. As Olav takes the floor, he begins to toast Märtha for the true work, but she has already left the room, upset.

Three months later, Olav is back in London, and the promised munitions from the lend-lease bill have yet to materialize. Märtha criticizes FDR for passing an empty, political bill, but he points out that the U.S. needs time to build the fleets and munitions to lend in the first place. He suggests that she find something more related to the war to occupy herself, perhaps organize a talk. Upset, she ignores his comment.

She does follow his suggestion, however, and offers lodging to Norwegian sailors on leave in her home. Haakon dislikes the idea of coarse soldiers staying with Märtha, but Olav is proud of his wife. He suggests that Haakon and he should do the same, glancing at the commodious English estate in which they’re living.

Märtha is awakened by screaming in the middle of the night. Sailors apologize to her: the young Otto has night terrors; waking him doesn’t help. Nevertheless, Märtha tries to pull him from the nightmare, comforting and cooing to him. He finally calms.

Unable to sleep, she sits in the kitchen. Otto walks in, and she offers him a cup of tea while asking him about himself. She learns that there’s not enough food back in Norway due to the Germans’ rationing; his family was happy to have him leave on a ship because it was one less mouth to feed.

The next day, Märtha goes to Morgenstierne with an idea: a tour to raise emergency funds for Norway, to be sent through the Swedish Red Cross, whose relief efforts are overseen by her father. Morgenstierne likes the idea, and blows it up further: they’ll start the tour in Madison Square Garden.

The problem is, Märtha is terrified of public speaking. Admiring Eleanor’s public appearances, she goes to her for help. But Eleanor is dismissive, telling her she doesn’t have time and sending Märtha away.

Märtha does find some inspiration in Otto, talking with him about doing the right thing in the face of fear. They promise each other they will both be brave.

After Eleanor hears that Märtha has taken in Norwegian sailors, however, she changes her mind. She admits that she dismissed Märtha at first, but has now reevaluated her. Asking what Märtha wants—really wants—she pulls out a motivation and the beginnings of a speech. She then teaches Märtha to be embarrassed, stomping around the room making silly faces.

At Madison Square Garden, Eleanor introduces Märtha, who stands in front of the crowd and hesitates. Finally, she begins. She describes the everyday life that the German invasion interrupted, and how much she and Norway simply want a return to normalcy. The speech is a resounding success.

Unfortunately, the Norwegian government has decided Märtha cannot continue her tour despite the support of Olav and Haakon—security would be too expensive, and they have more pressing things to worry about.

Haakon and the government have already disappointed Olav, who wants the bellicose General Fleischer to become Chief of Defense. The government still finds him too belligerent, and maintains that any futile attacks against the Germans in Norway right now would lead to reprisals against citizens still there.

There is some good news in London: Ulla and Rolf, the older children of Nikolai and Ragni, have arrived safely in London. And they have good news: Ragni is engaged to a young lieutenant who helped them reach England. Ragni and Nikolai are overjoyed.

Back in the U.S., FDR ditches his sacred cocktail hour with his closest aides to spend time with Märtha. His interest in Märtha devastates Missy, who has already tried to warn him that Märtha doesn’t look at him the same way he looks at her. FDR cruelly dismisses Missy, telling her she’s embarrassing herself by begging him to stay with her.

As usual, he pulls off the road to lose his Secret Service tail. He then gives Märtha a map. It shows the route she and Olav took on their tour of the States in 1939. She will take the same route for her tour to raise funds for Norway; the U.S. will provide the security.

Märtha hugs him in thanks. He starts to get intimate in return, only to be interrupted by the arrival of the Secret Service, who have found his hiding spot. He and Märtha separate, and they drive away.