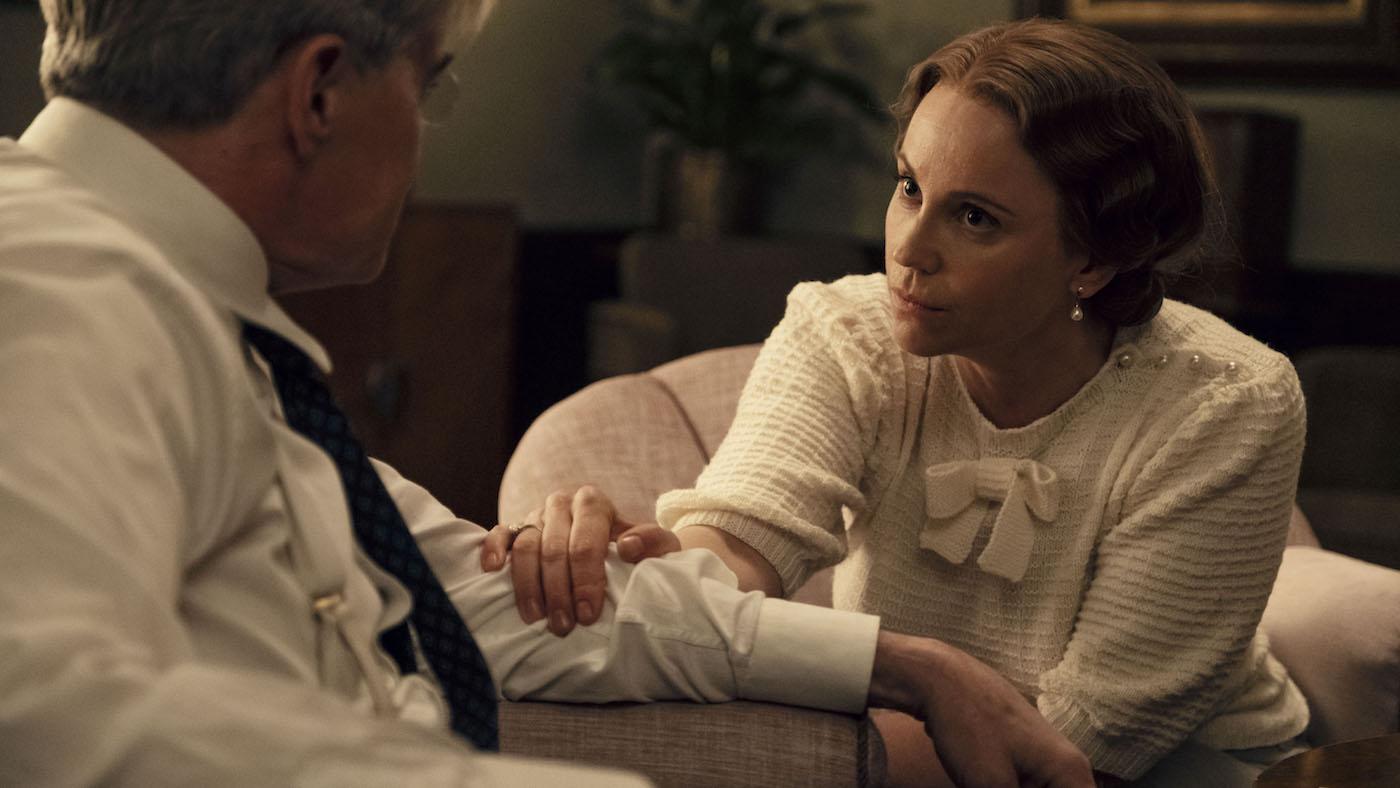 The day of the attack on Pearl Harbor, FDR visits Märtha at home, seeking comfort. “You were right all along,” he tells her. “The war did catch up with us.” She consoles him in the face of his despair that the U.S. will be fighting on two fronts and will take a long to mobilize, encouraging him to imagine what his country can achieve. The fight is not over.

In England, Olav, Haakon, and the Norwegian government applaud FDR’s speech announcing the U.S.’s entrance into the war. Later, Olav learns that his plans for Norway’s purpose in the war are endangered: a letter written by General Fleischer to Haakon during the invasion of Norway is being used as Nazi propaganda, given that it argued that the government shouldn’t flee but rather surrender. It means Fleischer will almost certainly not become Chief of Defense, despite Olav’s wishes.

There seems to be Nazi subterfuge at work in the U.S., too: Märtha is summoned to the White House and asked about a telegram to Berlin from a “Mr. Johnson” helping with the Norwegian aid effort. It alleges that she asked him for help to return to Norway. She denies it, and FDR tells her that the U.S. is concerned that the telegram exists as cover lest a conspiracy to kidnap Märtha and her children is carried out. Märtha should cancel her speaking tour out of safety.

When Olav and Haakon argue in support of Fleischer before the Cabinet, a minister brings up rumors swirling in the tabloids and British intelligence about Märtha’s relationship with FDR. Olav angrily defends his wife and demands an apology before storming out. Haakon tells him that the Cabinet is simply misdirecting him away from the matter of Fleischer. Later, Fleischer is dispatched to Canada on a meaningless assignment.

Olav decides he must go to Washington. Nikolai worries that the trip will cause him to miss his daughter Ulla’s wedding; Olav says they’ll “probably” be back in time. Meanwhile, Märtha has given Nikolai’s wife Ragni an early Christmas present: a dress to wear to Ulla’s wedding. Ragni is overjoyed that she has permission to go to London for it.

And yet, when she shares a Christmas meal with Nikolai upon his arrival in D.C., he tells her that Olav has been noncommittal about them returning in time for the wedding. The journey is long, the schedule is tight. Ragni leaves the dinner crying.

Olav and Märtha have left for a Christmas party at the White House. On the way there, Olav mentions the rumors and says they must be a united couple, but Märtha returns that they aren’t: they’re divided by an ocean.

At the party, Olav asks to speak to FDR, but is vague when Märtha asks why. Missy is drunk and possessive of FDR; he suggests to Märtha that they go for a drive, but she excuses herself. After composing herself, she accidentally runs into Missy, who warns her that FDR will eventually drop her—and to keep her hands off him.

Olav witnesses the whole exchange. Märtha assures him that nothing has happened between her and FDR. She doesn’t know what Olav has been doing in London, but won’t ask him about it even when he tells her to. She can’t tell him that she doesn’t have feelings for FDR when he asks.

Back at home, Olav wordlessly packs his bag and leaves, telling the children that something came up in London. Ragni stays behind—it is too late for her and Nikolai to arrive in Britain in time for the wedding. Ulla cries to not have her parents attend, but is pleased to have Haakon walk her down the aisle instead.

This time, Märtha turns to FDR for comfort. It was like Olav was a stranger, she tells the president. Who can she talk to now? Me, he replies, kissing her on the head. Missy sees through a door and collapses. An ambulance takes her to the hospital, and Märtha leaves, despite FDR’s protestations.

Months later, FDR invites himself to Märtha’s Long Island summer home after a long period when she hasn’t seen him. Despite that absence, Olav still resents FDR: when his daughters let slip over the phone that FDR is coming to visit, he hangs up before speaking to Märtha.

That evening, FDR asks if Märtha has been avoiding him. She redirects, asking about Missy: the stroke partially paralyzed her. Märtha tells him that she can’t let her emotions get the better of her, and seems about to tell him she can no longer see him when they are interrupted by a secret service agent. They must shelter in the basement and lock the door.

While Märtha frets about her children and wonders what is happening, FDR shares a dream. He was captaining a ship in turbulent seas when suddenly he lost his sails and realized he had no crew. Without you, he tells her, my ship has lost its sails.

Only later does everyone learn what happened. German soldiers from a submarine landed on the beach near Märtha’s vacation house. Ammunition was buried nearby. If the Secret Service hadn’t been there, who knows what might have happened.

And there are still Nazi saboteurs in the country. Shortly before the Secret Service sent Märtha and FDR to the basement, Ragni’s American friend excused herself from the house and traveled to the beach, where she signaled a submarine with a flashlight.