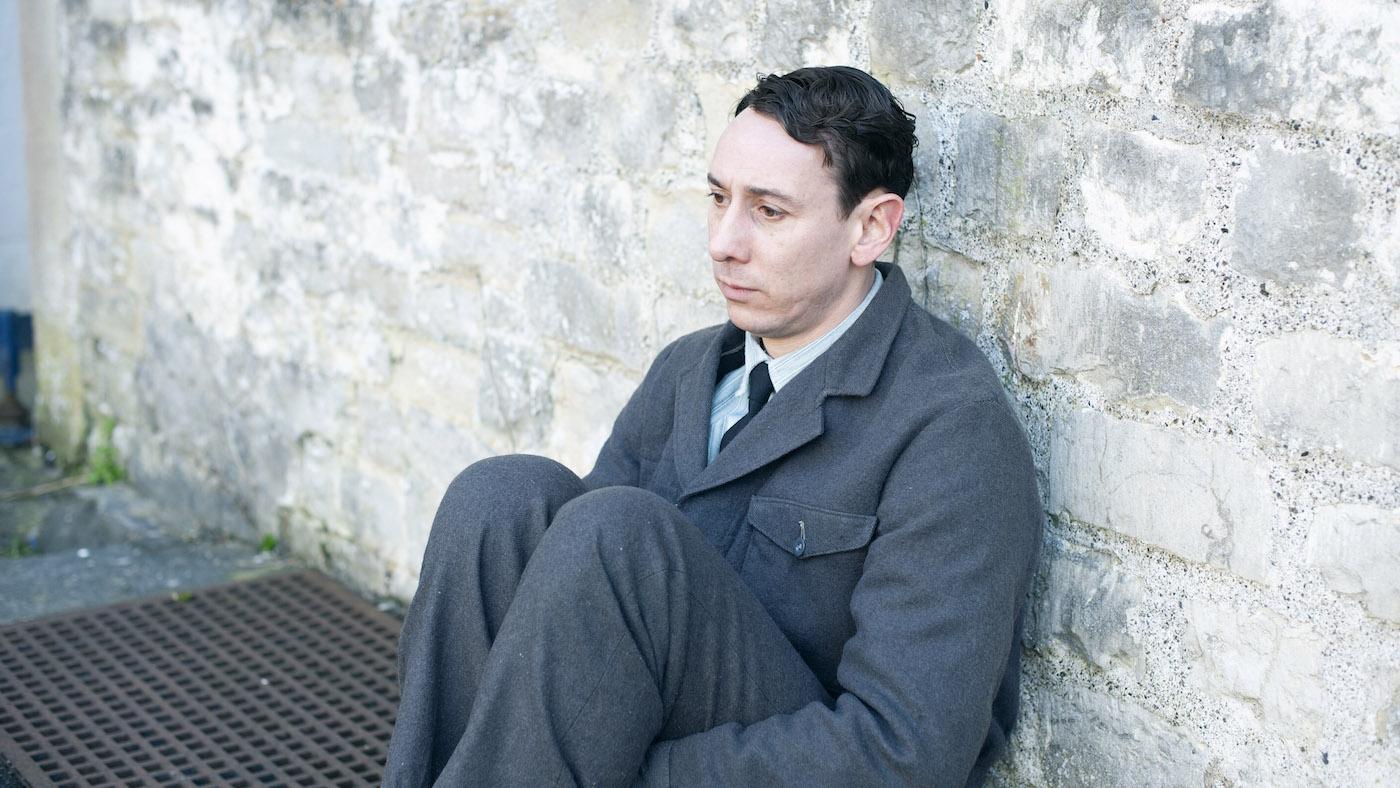 Leonard is struggling in prison, but wants to help a fellow inmate. Photo: Masterpiece and Kudos

Leonard has received a letter in prison from Daniel, but he’s not responding—and it’s not just because his aggressive cellmate Joe Davies takes the letter and uses it to roll cigarettes. (Joe also steals Leonard’s shoes, forcing him to dine barefoot.) After Will witnesses a drunken Daniel yelling at a man in the pub who he says tried to blackmail him, and lamenting, “Why won’t he write to me?” Will goes to visit Leonard and asks. Leonard says he needs to time to reflect on his failings; he has sinned. Will tells him he has neither failed nor sinned.

Worried about Leonard, Will asks Geordie—who was a POW in Burma—to speak to him, but Geordie doesn’t want to. And there are soon worse problems in the prison. Leonard returns to his cell to find Joe wet and crying in a corner, saying it wasn’t me. Guards come in and usher Joe away: another inmate has been found dead.

As the prison chaplain explains to Leonard after he tries to raise concerns with the dismissive and insulting prison warden, Joe is in prison for killing his mother. She was found drowned in the tub, fully clothed; so too was Elroy Hastings, the other inmate.

Leonard asks Will for help. He believes Joe’s claim of innocence, and thinks the warden is trying to keep the whole death quiet. You can’t go anywhere without a guard, so how did Joe manage to kill Elroy and then make it back to his cell?

Will brings in Geordie, and the warden reluctantly let them speak to Joe, who is in solitary confinement. Geordie sympathizes with the scared inmate’s terror, and Joe says he hasn’t killed anyone—including his mother. The warden interrupts, saying Joe is lying: he’s confessed. But Joe’s bruises and fear suggest the confession was coerced.

Joe’s father doesn’t remember much of the night his wife died, he tells Will and Geordie. He had a breakdown, and the memories only came back after he had electroshock therapy: he saw his son holding his wife underwater.

Elroy had tried to befriend Leonard, as a fellow man in prison for being gay. His mother visits Leonard, saying Elroy spoke fondly of him. You don’t deserve to be punished, she tells Leonard. She has information—Leonard tells her to go to Will. Leonard also investigates the bathroom where Elroy died and finds the mirror cracked, as though someone had bashed into it.

Mrs. Hastings tells Will she thinks the prison is lying about Joe being Elroy’s killer. Someone tried to blackmail her recently, saying he knew someone in prison who would make Elroy suffer. She didn’t pay him.

Will connects the threat to the one against Daniel. He rushes to the prison with Geordie and is taken by the chaplain to Leonard’s cell, where a prison guard named Lynch is in the process of beating and shaming him.

Lynch is unapologetic. He’s just making some money off criminals. But he says he didn’t kill Elroy, even though he was on duty that night and it takes a key to get to the bathroom. Because of his blackmailing, however, they do at least get Joe released from solitary. Geordie tells Leonard not to let prison destroy him; he cannot lose hope.

Being back in an abusive prison surfaces memories of Geordie’s time in Burma. He gets drunk with his old comrade Johnny—not for the first time recently. He has already forgotten his anniversary because of a binge. Johnny admits he nearly killed himself due to the trauma early on, until he forced himself to stop remembering.

Will and Mrs. C.—newly empowered by her reading of the Cathy-loaned The Second Sex—are throwing a surprise anniversary party for the Keatings. Will convinces the new curate, Henry, to come, playfully citing some of the duties enumerated by Henry in a “statement of intent”—Will wants Henry to relax a bit.

Will’s stepsister Tamara also shows up, without an invitation. She’s staying at the vicarage, to everyone’s annoyance, having been thrown out of her father’s house by Will’s mother. When Will begs his mother for leniency, she advises him to stay away from Tamara.

Geordie shows up at the party drunk, to Cathy’s chagrin. Cathy saved me, he says in a toast, thinking about his war horrors. He and Tamara “dance,” and he collapses onto a table, spilling punch on a photo album Cathy made him, staining the scraps of wedding dress she used as a cover. Don’t ever do that in front of the kids again, she warns him, ushering them out.

The next morning, Will apologizes to Henry for everyone’s behavior. It’s been hard since they lost Leonard, but they can be Henry’s family, if he’ll accept. Geordie, waking from a a night on the couch, tells Will he feels worst about his eldest daughter Esme, who comforted her mother and siblings last night. She shouldn’t have to feel responsible for me, he says.

Will again speaks to Joe’s father. His wife didn’t have a wedding ring on when she died—was she leaving him? He killed her and let Joe, who was just a child and had experienced no provocation, take the blame.

So Joe was framed in Elroy’s death, by someone who knew the details of his supposed crime intimately: his confessor. Leonard has also realized the chaplain is behind the murders and blackmail. Joe has insisted that the guard Lynch didn’t kill Elroy. Leonard realizes that a wooden box in Elroy’s possession, carved with “Veritas”—truth—and some circles, shows the combination to a lock. The chaplain has a safe in his office. Leonard opens it and finds a book listing prisoners, their relations, and how they might be blackmailed. But when the chaplain catches him in the act, the chaplain pretends Leonard attacked him and has him sent to solitary.

Luckily, Will and Geordie arrest the chaplain and get Leonard released from solitary. Before Joe leaves prison, he gives Leonard Daniel’s letter back.

Cathy and Geordie fight, including about the anger he bears from his time in the war. I forgive you every time you mess up, she says, citing his affair. Geordie nearly hits her. Later, he takes a stained slip of paper from his hat brim and reads through a list of names of comrades who died in the prison camp, crying.