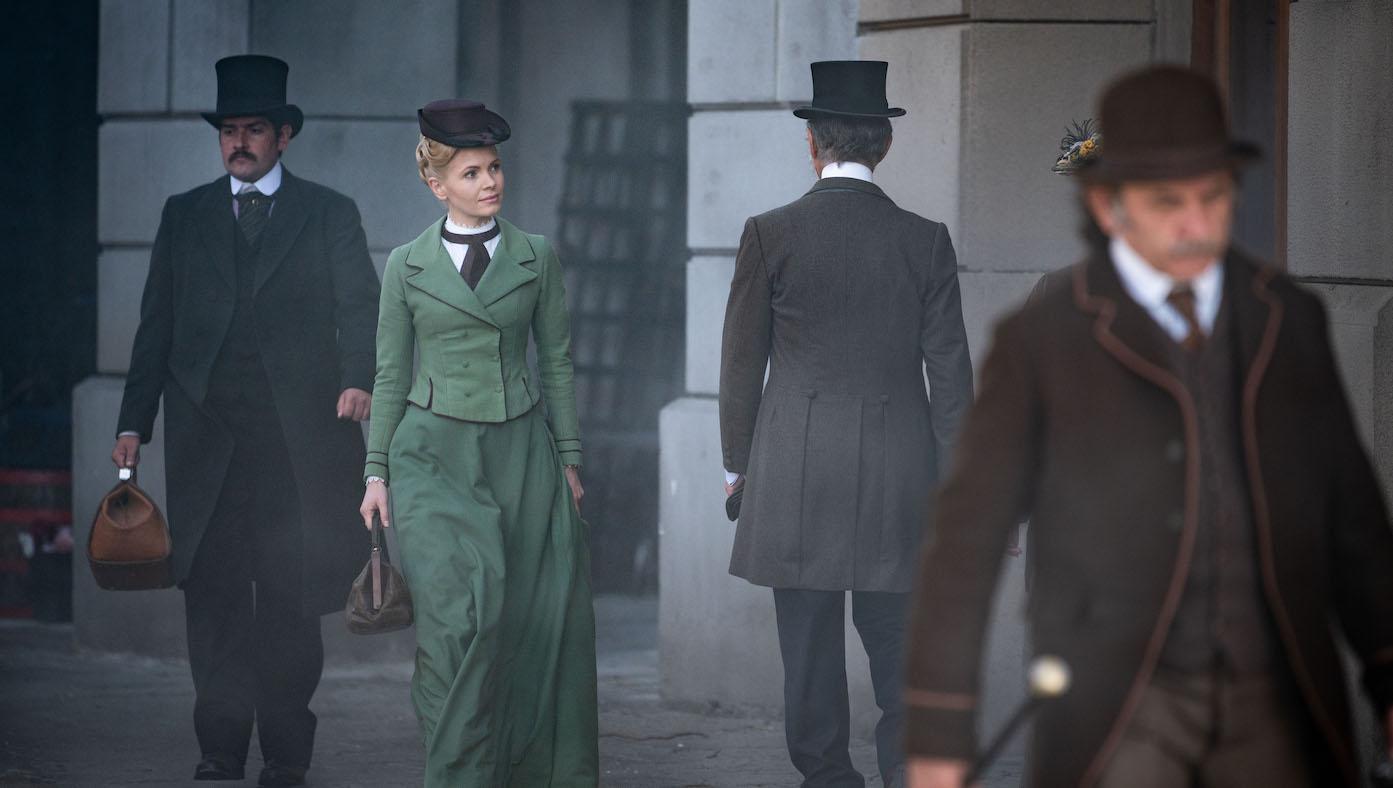 Eliza convinces William to hire her as a consultant when she comes across a murder victim. Photo: Element 8 Entertainment and MASTERPIECE

Despite his recently rocky relationship with Superintendent Munro, William is up for a promotion to chief inspector. The only catch: it’s in Glasgow.

Eliza assumes this will be like the other times William has been offered a promotion with a relocation: he’ll agonize over the decision but decide to stay in London. She offends William by calling him “comfortable” and “settled.”

Her argument with William provides a welcome distraction from the job currently occupying her: looking for reasons to reject the men Mrs. Parker has selected as possible husbands for Hattie, who wants to marry for love. Moses has grown tired of looking into the backgrounds of respectable men, and Eliza is running out of reasons to disqualify them.

Eliza encourages Hattie to stand up for herself, and Hattie decides to inquire with her accountant about setting up her own household. But when she and Eliza arrive, they find the accountant, Norris, dead. The clock is stopped at 11:45 pm, he’s holding a bloodstained lily, and there’s a knife in his neck.

Eliza recognizes the scene as drawn straight from Quarter to Midnight, a popular novel by the mystery writer Samuel Bedborough. She convinces William, who hasn’t read the book, to hire her to work the case—she’s read all Samuel’s works. Norris was Samuel’s accountant, but Samuel says they weren’t close. The night Norris died, Samuel had dinner with his sister and then worked on a new novel through the night at a posh hotel where he’s staying while his house is being painted.

Quarter to Midnight features an author character who kills his two best friends when he becomes convinced they will commit him to an asylum, but then kills himself because he can’t live with the guilt. He arranges the friends’ bodies with a lily, as his parents’ corpses were when they died of scarlet fever.

William buys all of Samuel’s works from the bookseller where he and Eliza found Samuel doing a reading. The proprietor tells him that Samuel seemed upset that day, which was atypical. Eliza and William dig into the books and recall from all the rags-to-riches themes that Samuel grew up in a workhouse.

Eliza also realizes that Norris would be the second murder, according to the book. The first person was killed by his own knife, which was then left in the second person, and indeed, the knife in Norris has a crest matching that of Samuel’s publisher, Bellamy. They visit and find him dead in his office.

Samuel had dinner with him a few nights ago. Samuel has a newly injured hand, which he claims came from slipping in the bathroom. But the hotel porter says Samuel left the hotel the previous night. William puts Samuel under police protection, lest he end up dead like the author in Quarter to Midnight.

Eliza visits the actress Francesca Bellesini, who was arrested along with Samuel three months ago for disturbing the peace; charges were dropped. Francesca explains that Samuel was a lover, but he tried to end things. She was drunk and insulted by the manner in which he did so: sending Norris with a diamond necklace—something he has done to several other women.

Hattie also believes that Norris and Samuel were closer than Samuel let on. Norris was always talking about doing favors for Samuel, including helping him purchase a new house on her aunt’s street. But last week a repossession notice went up on the house.

Moses discovers that Samuel is in great debt: he has expensive taste. His hand injury came from a clandestine visit to the bailiff’s warehouse. Samuel has been trying to get back a writing desk from his repossessed home; the bailiff refused, and Samuel tried to break in but was caught and roughed up.

Eliza and Moses go visit the warehouse themselves and discover a hidden compartment in the desk containing the manuscripts to Samuel’s books.

William’s possible promotion is leading to some reevaluations amongst his colleagues. Phelps asks him to put in a good word to get William’s job if William does go to Glasgow, and points out that, at some point, the promotions will stop coming if William keeps turning them down. William also counsels Fitzroy to try to fit in more; William may not always be around to protect him. But when Fitzroy tries to stand up to a taunting Phelps at the pub, he gets beaten up. William lets him sleep in his spare room, so that Fitzroy doesn’t have to go home to his father’s disdain.

Samuel’s manuscripts reveal something: Samuel is not the author of his books; his sister is. The notes from the publisher on the manuscripts are addressed to her.

She’s about to stab herself when Eliza and William burst in. She has just finished a new novel, and wanted to finally have fame in her death by killing herself over it.

She explains that Samuel always wanted to write, but wasn’t very talented. When she tried to help him by rewriting, however, the manuscript was accepted. He didn’t want to be humiliated by having her name on the book, and he told her she could have credit for the next. But then he, Norris, and Bellamy convinced her to keep her work a secret, as there would be a smaller audience for a female novelist. She was promised a comfortable life in return. But when Samuel’s debts piled up and he lost the house, she had finally had enough.

Having solved the case, William and Eliza make up, and Eliza tells William that she envies and respects his contentment, his “comfortable” and “settled” life.

William refuses the promotion, to Munro’s regret. The commissioner—Fitzroy’s father—wants William gone, because he believes Fitzroy has gotten worse under his command. There is no longer a job for William in London. Glasgow was his way out.