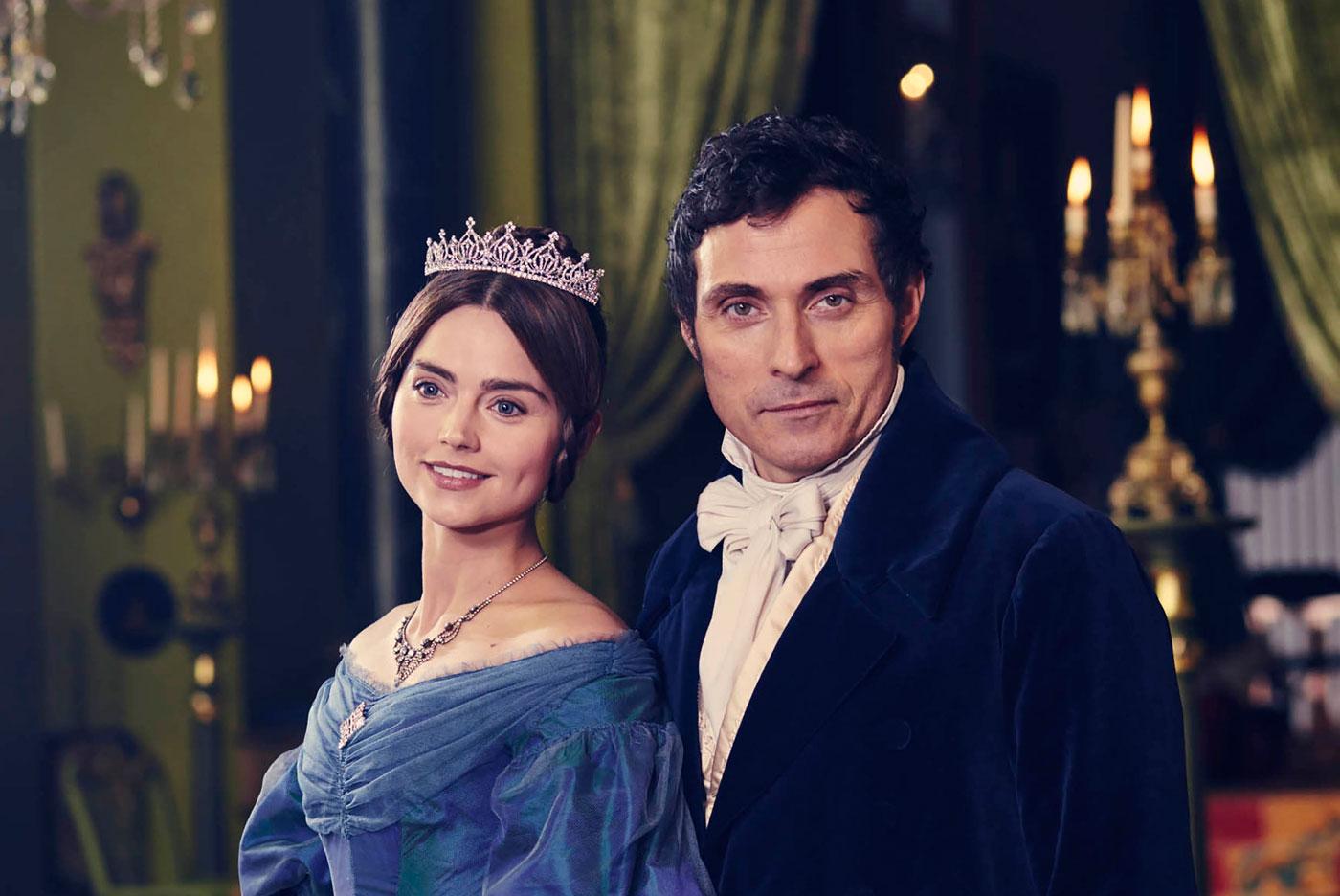 Everyone has opinions on whom Victoria should marry. Her uncle Leopold, king of Belgium, wants her to consider his nephew Albert, as do her mother and Sir John. Cumberland wants his nephew George to be the next king. The Grand Duke of Russia is throwing his name in the ring. Even the servants are taking bets on who will be the match.

But, as usual, Victoria refuses to be told what to do. She’s been enjoying the company of the Grand Duke, the slimy charmer who was a little too forward in episode 1 (why him, Victoria? It must be the mustache−the real Victoria was so enamored of her eventual husband’s facial hair that she requested all British soldiers copy it). Unimpressed by George, she also refuses to send for Albert. Instead, she is slowly realizing she’s in love with Lord Melbourne.

Yes, that’s the man who was actually forty years her senior. The two have an awkward, hint-laden conversation about marriage revolving around Queen Elizabeth, the “Virgin Queen,” whose portrait they are standing near. But for now neither will say anything directly about their relationship. 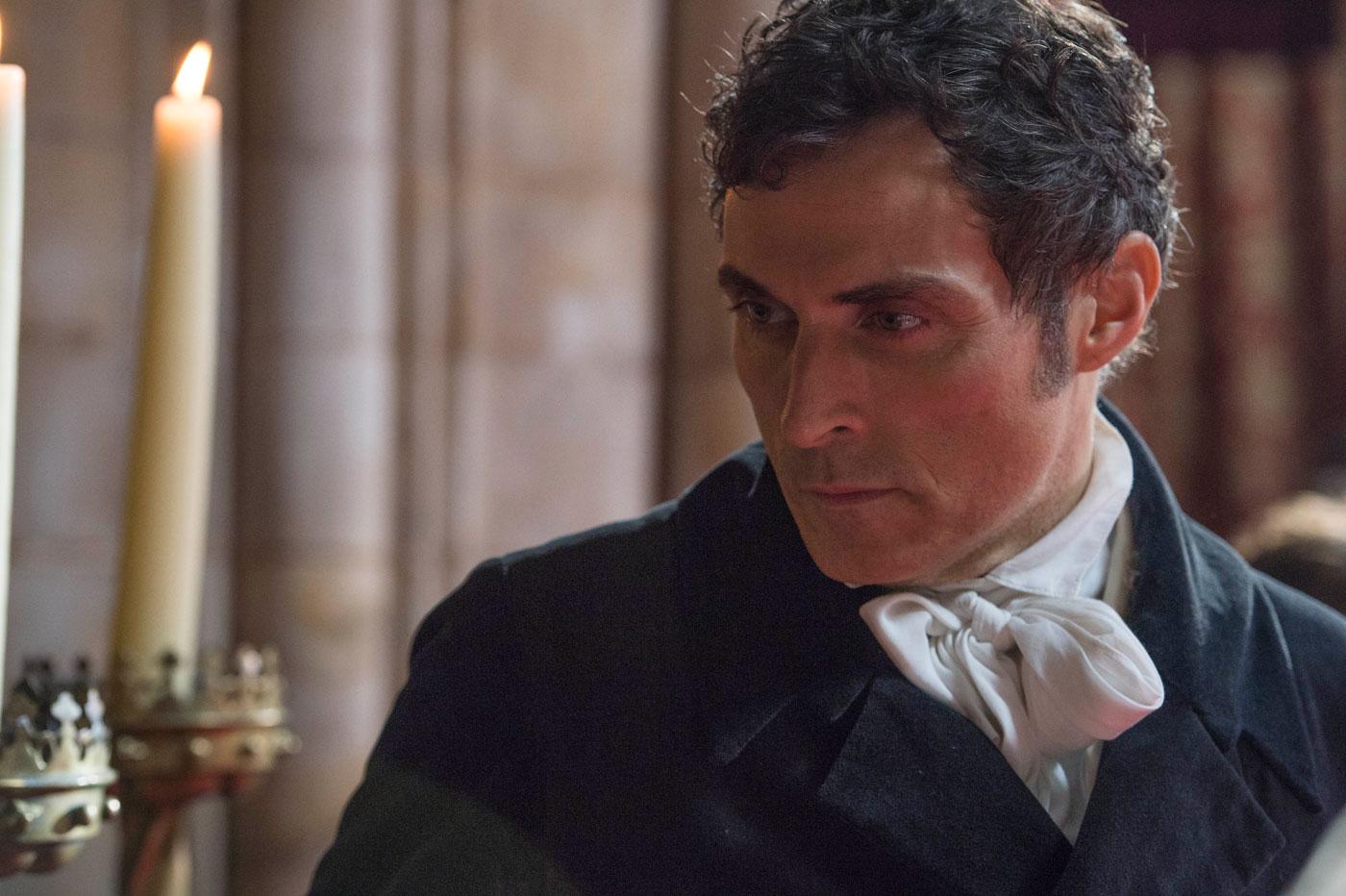 Victoria wants Lord Melbourne to be more than just a mentor. (ITV Plc) Not that others haven’t noticed the sparks. Leopold warns Victoria in as ominous manner as possible−dark carriage, candle blown out for effect−that she should be careful about her relationship with Melbourne. Leopold is a doom-laden prophet in this episode: he later warns the Duchess of Kent that Sir John may not care about her as much as she does him. In that same conversation, the Duchess asks Leopold for money, complaining that she’s living like a pauper because her daughter is giving her a stingy allowance. Yeah, those palaces are some real rough lodgings. 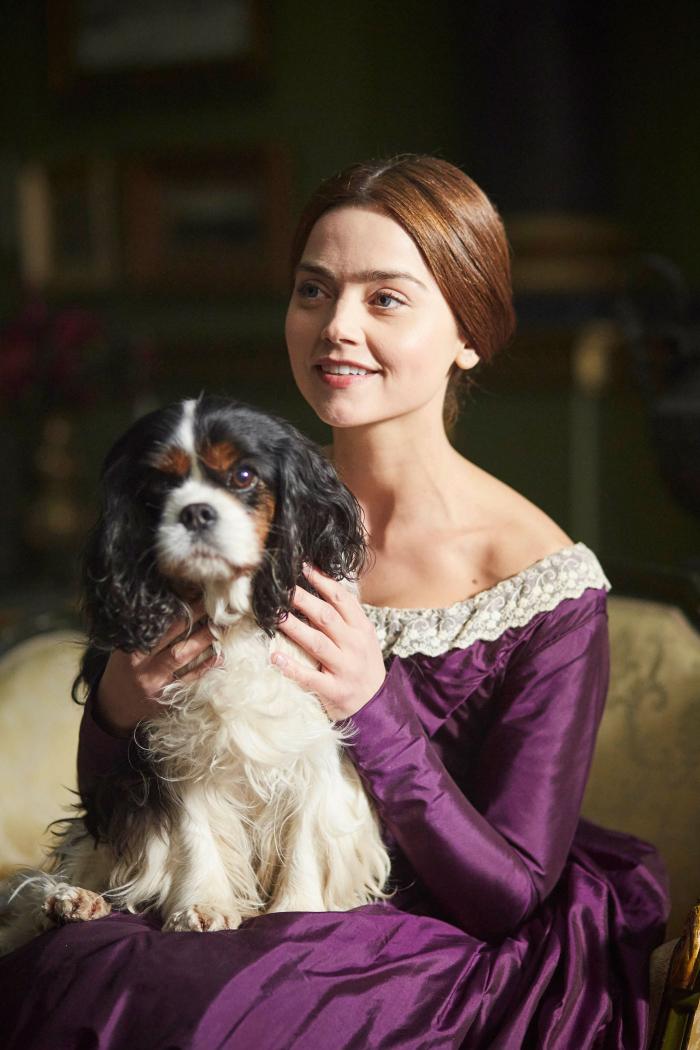 Victoria is still an inexperienced teenager in many respects, especially when it comes to love. (ITV Plc) Victoria finally decides to move things forward regarding marriage, and makes a trip to Lord Melbourne’s estate “incognito”−which means that everyone and her mother knows about it. She haltingly confesses her love to Melbourne, while he turns her down by telling her he mated for life. No matter that his late wife left him to have an affair with Lord Byron, the poet and prototypical Romantic hero, then wrote a tell-all novel in which she angered pretty much everyone in British high society.

Victoria shows her inexperienced youth by dissolving into a sobbing tantrum back at the palace. We finally learn that her attraction to Melbourne is precisely because of his age and wisdom: she doesn’t want to marry “a stupid boy.” The imperious men in her life like Sir John and Leopold agree: they want her to marry “a man who can control her,” since she’s so naïve and unbalanced. Of course.

Meanwhile, the chef Francatelli is continuing to pry into Skerrett’s life and hitting on her in the process, though she’s starting to get annoyed by him. We learn she was a laundress at “a house of ill repute” before coming to the palace. I’m sensing some blackmail is in the future for poor Skerrett, especially since she keeps rebuffing Francatelli. Almost all the other men in this show believe they have a right to whatever they desire, so Francatelli will probably follow their lead.

Jenkins is distraught right now, because her nephew has been sentenced to be hanged, drawn and quartered for participating in a riot agitating for universal suffrage. Penge, being the rat he is, has sensed Jenkins’s sensitivity to the subject and keeps bringing it up. What a guy. 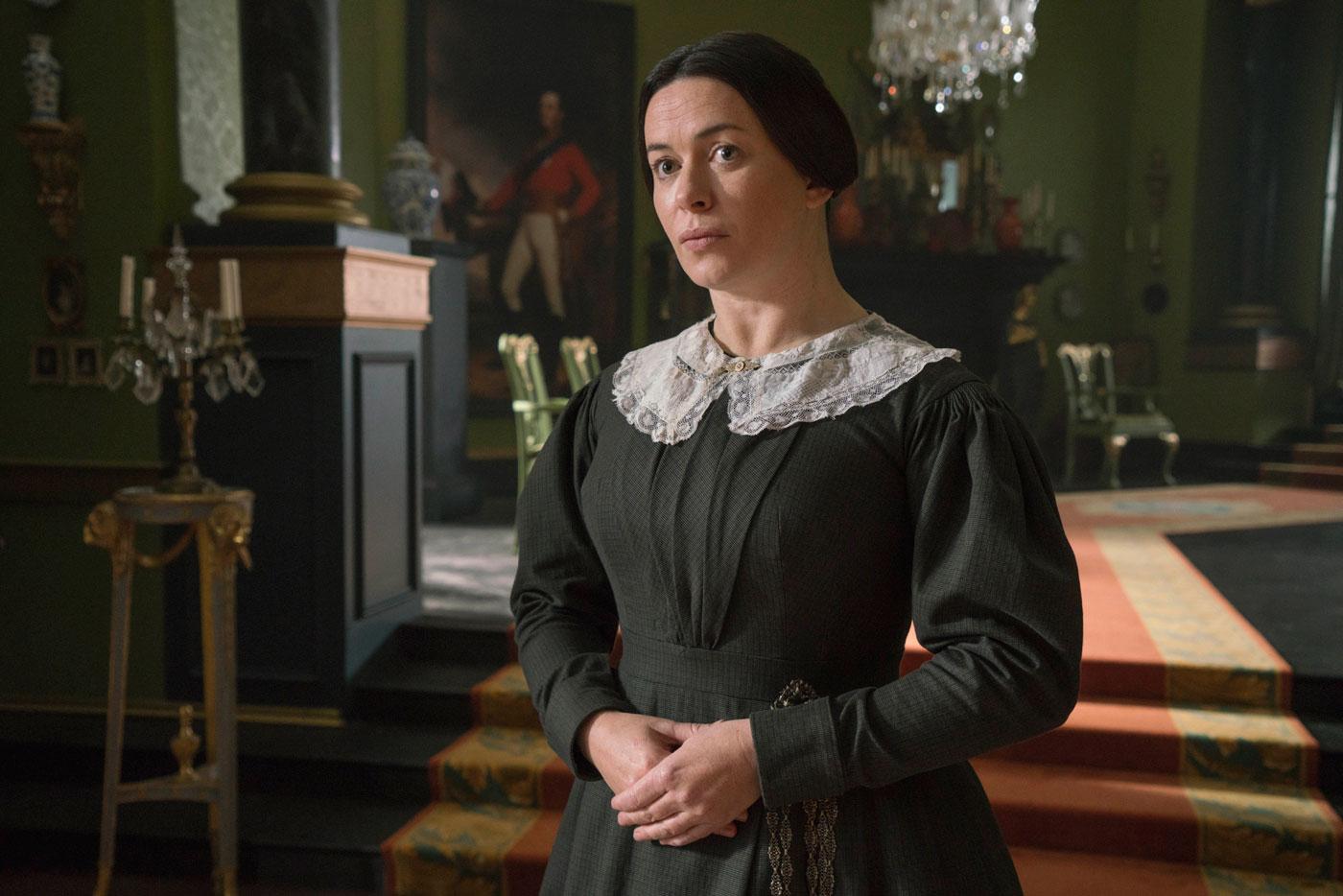 Jenkins's nephew has been sentenced to be hanged. (ITV Plc) We shift to a costume ball, filled with delightful and pointed costume choices. Victoria is Queen Elizabeth with a cute ruff collar; Melbourne is Elizabeth’s “companion” Leicester; Cumberland and Leopold are Roman emperors; Sir John is dressed all in black. Victoria and Melbourne have another Elizabeth-themed conversation about marriage, we find out he is in love with her, and they decide that they can never act upon it. Good thing too, or Victoria would have been a widow for even longer than she was in reality−he’s a lot older than her.

With that out of the way, Victoria’s enemies begin to disappear. Cumberland gives up on influencing the crown and decides to go home to Hanover. Sir John leaves in exchange for a pension and estate in Ireland, abandoning the Duchess, whose allowance is raised. The Duchess is devastated. Sir John is a selfish pig about it (he doesn’t want to leave, but must “use his talents elsewhere” since they’re currently being wasted), and Victoria and her mom bond over their man problems. Victoria also eases Jenkins’s depression by commuting the sentence of the rioters, exiling them to Australia instead of hanging them. 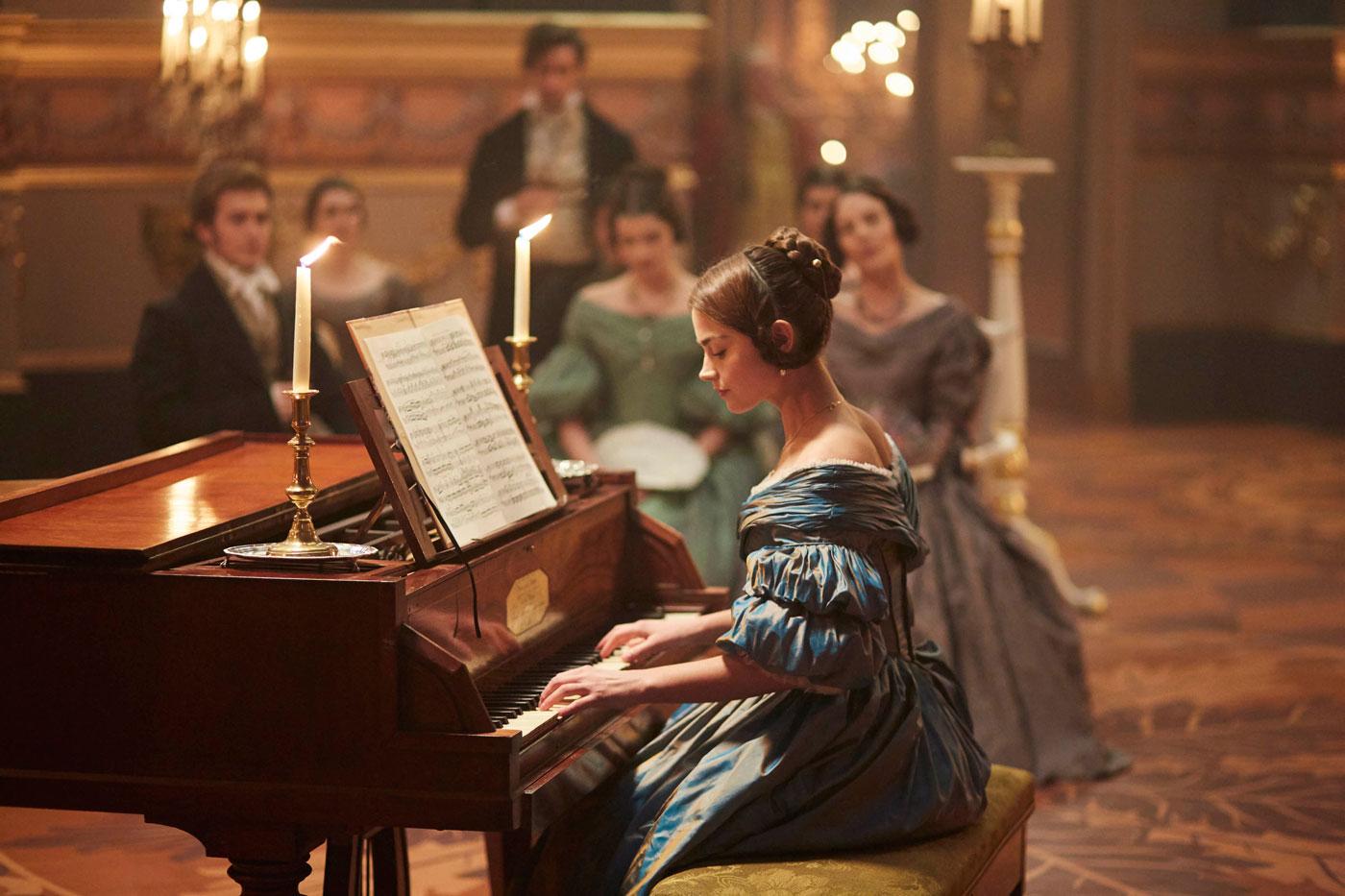 Prince Albert is about to make a dramatic entrance. (ITV Plc) We have one final love conversation between Victoria and Melbourne, again in front of Elizabeth’s portrait (thanks for the framing device), and Melbourne tells Victoria she needs a husband, but to love her, not control her. Cue the dashing Albert, who makes quite an entrance. Victoria is playing piano and Albert emerges, unseen by her, to turn the page of her music. She looks up at him and is so dumbstruck that she breaks off playing. She stares at him and breathes heavily (though that may be from undergoing the writhing contortions Jenna Coleman seems to believe you make while playing piano). So much for her aversion to stupid boys−it must be the mustache.