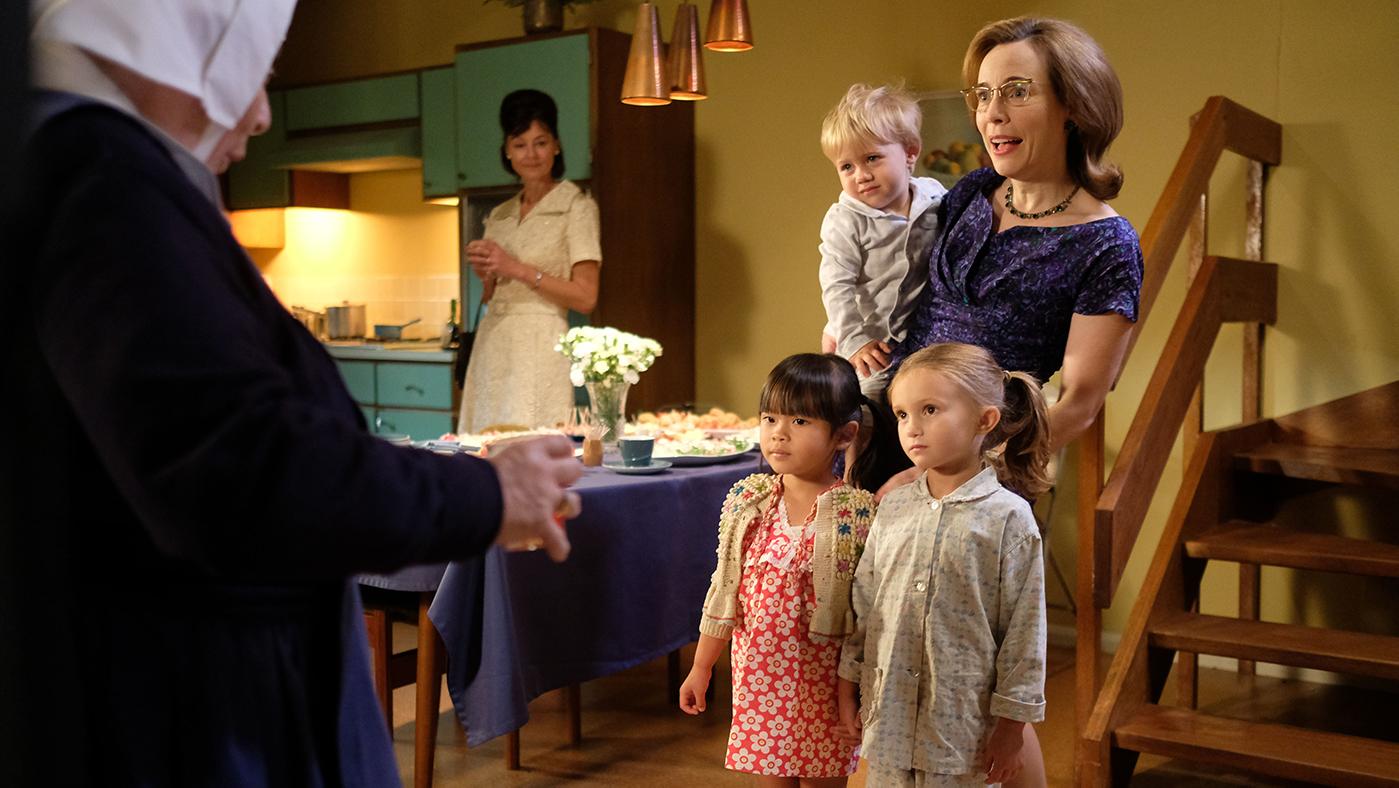 The Turners must prepare for the departure of Mae on very short notice. Photo: BBC/Neal Street Productions

Sister Frances has been at Nonnatus House for six months now, but she has yet to deliver a baby without any supervision. Mother Mildred believes she is ready, and with Phyllis still in the hospital, it’s the perfect time for Frances to take the leap. She might end up attending the birth of one of two neighbors, Connie Blakemore and Heather Pugh, who are both nearing the end of their term.

This will be Connie’s second child; her first delivery was straightforward and easy. Heather is on her first pregnancy. She’s been experiencing a burning sensation during urination, as well as a rank smell. Tests reveal that she has gonorrhea, even though she has only ever slept with her husband, Vince – and she made him wait until marriage. Because the gonorrhea could cause an infection when she gives birth and because she needs regular injections to treat it, Heather is checked into the maternity home.

Doctor Turner goes to speak with and test Vince, who also has an infection. The doctor tells Vince he’ll also need to know who he has been sleeping with besides Heather, so that he can treat her infection and prevent it from spreading. Vince reveals that he has been seeing a prostitute while Heather thought he was working nights as a bookie at the dog track. When Doctor Turner visits the prostitute to treat her, keep her from working until the infection clears, and advise her to use protection – but the clients won’t wear condoms, she says – he runs into Vince, still trying to buy sex, despite the division his habit has opened in his marriage. 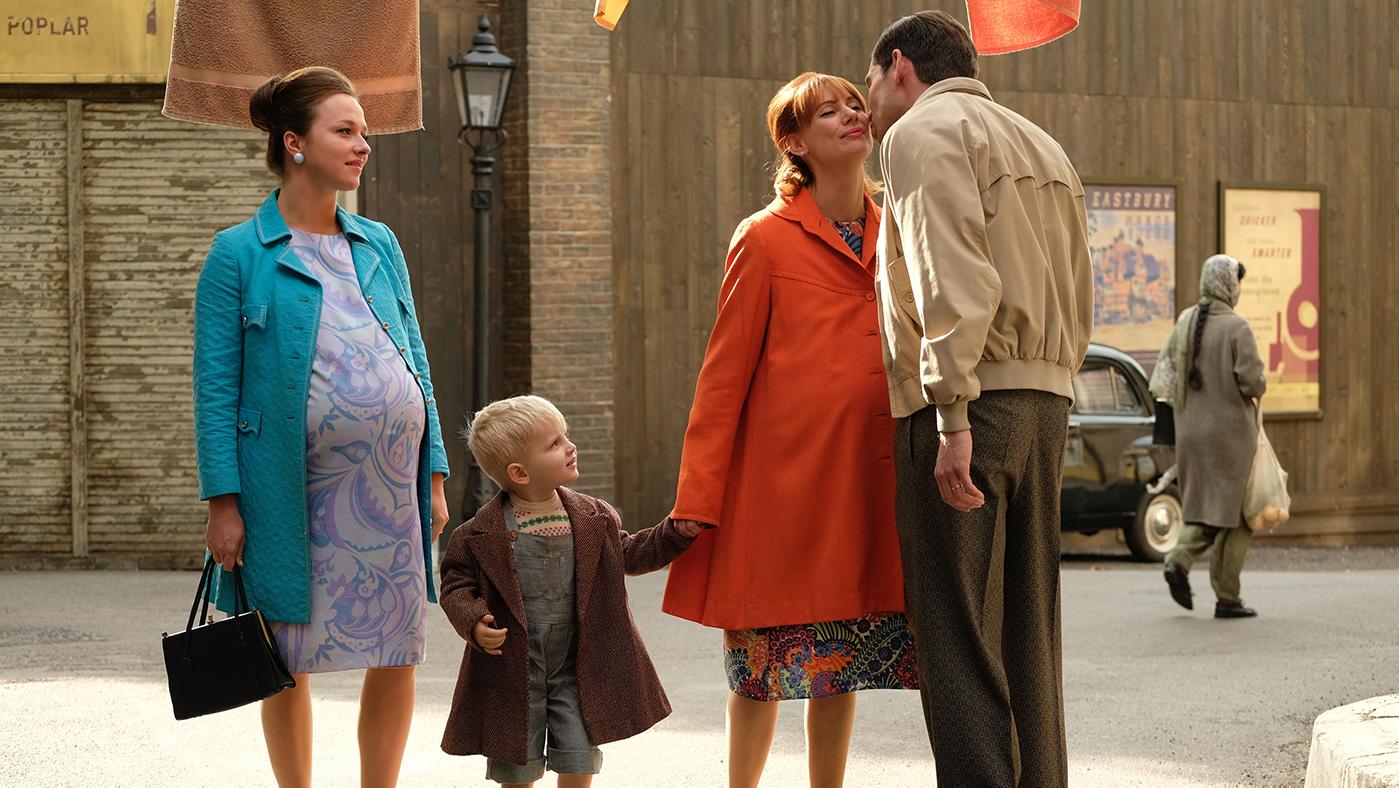 Contraception has become an important topic in Poplar. Trixie and the Turners are trying to garner support for a clinic in Poplar that would provide contraception and counselling, especially for unmarried women. Unfortunately, the clinic would require a lot of money from the borough council, money that would have to be taken away from other people, so Violet is against the proposal, even though she knows it would do good.

The clinic is a difficult proposition for the Nonnatan sisters, who know it will be beneficial but have religious qualms with contraception. But while Mother Mildred is eager to consider all sides of the debate, Sister Julienne is less open-minded. Mildred thinks that Julienne’s extensive knowledge of Poplar might be useful to Trixie in drumming up support for the clinic, so she encourages debate. She asks Valerie what her grandmother, who grew up in Poplar, might have thought of the proposal when she was a young woman. Valerie explains that her Gran would have embraced it: her Gran’s mother died during her ninth pregnancy, and her father was abusive; her Gran knows the struggles of the working-class women in Poplar.

Those women at least have steadfast allies in the midwives of Nonnatus House. When Connie goes into labor, Sister Frances is sent off alone to supervise. It should be an easy delivery, but Frances is terribly nervous nonetheless. The baby isn’t positioned correctly, so Frances calls for assistance. But she and Connie successfully make it through the delivery before anyone arrives. When she returns for a follow-up, however, Connie is sobbing, for no reason that she can explain. Frances comforts her and kicks out the well-wishers in her home. She’s not there just for the delivery; she also wants to ensure the health, happiness, and comfort of the new mother and baby.

Now that Frances has made her first solo delivery, Mother Mildred is ready to return to the Mother House. Poplar doesn’t need her anymore; Frances can pick up Phyllis’s work. Mildred leaves quietly in the evening; only Sister Frances sees her go. 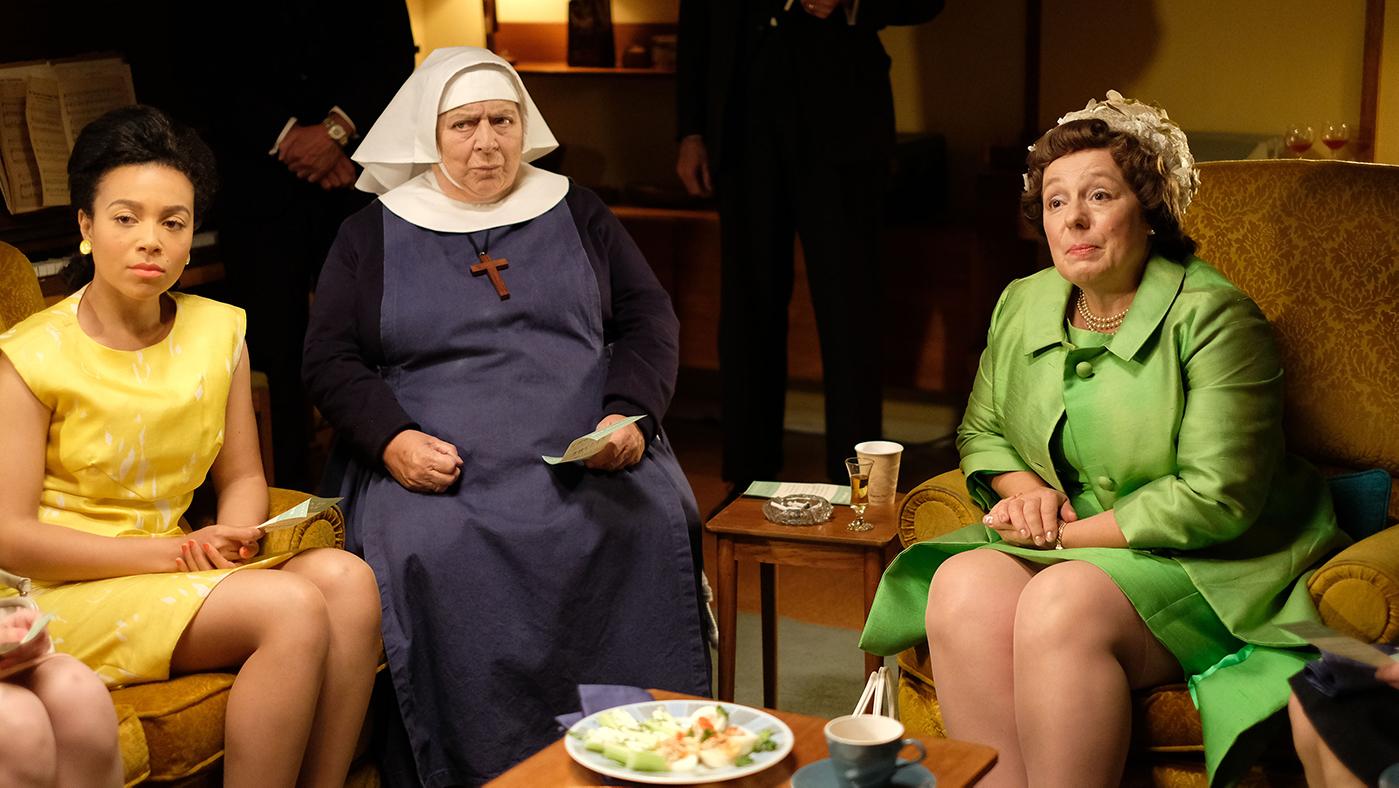 The importance of the midwives to Poplar is evident in the number of cards and flowers Phyllis receives from the women of the borough while she convalesces – plus some from Sergeant Woolf. Phyllis hoped her long hospital stay would make Woolf lose interest in her – but, as Lucille points out, absence makes the heart fonder.

Lucille’s own relationship is in a better place. She and Cyril have plans to see a movie, but the theater is closed. Instead, they join Valerie, her Gran, and Trixie at the local bingo night. Cyril takes to the company and the game with gusto.

Valerie’s Gran suffers through the game – her boil has gotten worse, though she won’t admit it. Valerie forces her to go see Doctor Turner. Turns out it has become a carbuncle: she will have to come to the clinic for antibiotics. On one visit, Sister Julienne attends to her, and Valerie’s Gran shares her pride in Valerie. She wanted to be a nurse, too, but back then only middle-class people became nurses; besides, she left school at age 12.

Heather Pugh feels worthless. Even though Vince had her at home, he still went out to pay for sex. She refuses to see him. But when she goes into labor, she decides she wants him to be nearby. When Doctor Turner visits Vince to bring him to the clinic, however, he doesn’t want to go; he, too, feels worthless, and that his presence won’t be any help to Heather. He doesn’t know why he kept going to the prostitute – he had taken up the habit while in the army to blow off steam, but had dropped it after marrying Heather. He only started again after she got pregnant. Doctor Turner suggests it’s a method of coping with the stress and change, and convinces Vince to come to the clinic – he can still atone.

Heather gives birth to a daughter who is free of infection. Doctor Turner recommends counselling for Heather and Vince, convincing her that Vince is ready to change. She lets him into her room to see their new daughter. She’s ready to work on forgiving Vince, but she lays down the law: no more working nights. Vince agrees. He’ll do whatever it takes to save his marriage. 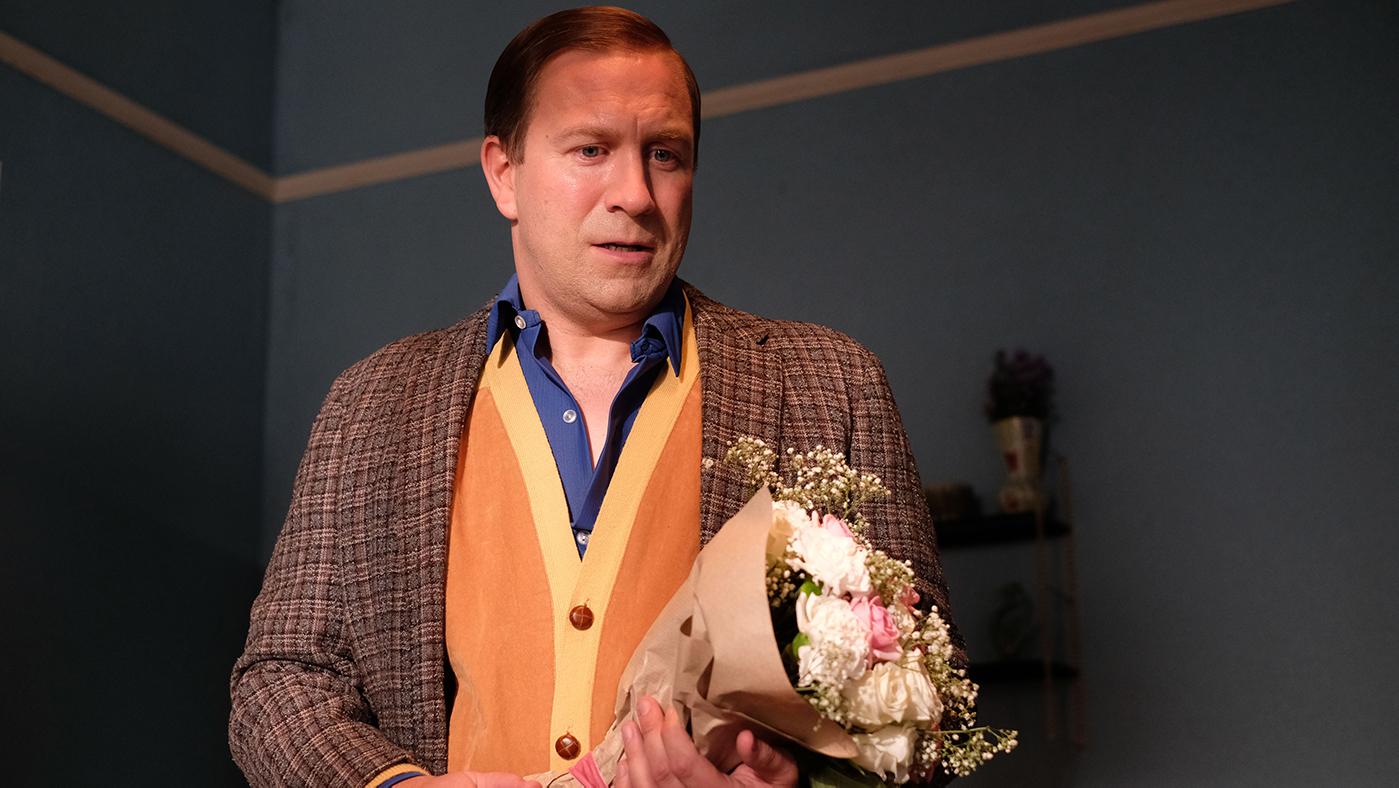 Vince Pugh hates his lack of willpower, and has caused his wife to feel worthless. Photo: BBC/Neal Street Productions

The doctor himself and Shelagh are soon to lose someone who has become like a daughter. They’ve been given a week’s notice for Mae’s adoption. When they break the news to the family, Tim is upset – he’ll miss Mae, and he’s also worried that Angela won’t understand why her new friend is leaving.

Valerie receives an urgent call from her Aunt to come to her pub and bring her medical bag – it sounds desperate enough that Trixie goes with her. Valerie’s aunt isn’t happy to see another nurse with her niece, but she sends them both up the back stairs to Valerie’s Gran anyway. A young woman lies on a table, pallid and bleeding, while Gran stands by. She was performing an abortion.

Valerie is stunned. Luckily, Trixie is there to take charge. She forces Valerie’s aunt to call an ambulance against her wishes – abortion is illegal – if she doesn’t Trixie will get the police. She begins to treat the girl, all while Valerie stands horrified. When the ambulance arrives, Trixie goes with: she’s afraid the girl will miscarry on the way to the hospital.

Valerie finally rouses from her shock. She begins to lay into her Gran. She’s seen the consequences of these back-alley abortions, the girls like Cath Hindman, who lose the ability to have children, or Jeannie Tennant, who dies of an infection. But Valerie’s Gran has seen terrible situations, too: the woman who already struggles to feed her children and can’t take care of another, or the wife who is beaten by her husband, or the unmarried girl whose life will be ruined if she has a child. But you get paid for it! Valerie yells at her Gran. In response, her Gran burns the money – less than others charge, anyway – that’s how little it matters. Or is she just burning evidence? Valerie asks. But evidence only matters if the police come, her Gran responds.

And they’ll only come if someone tells them.