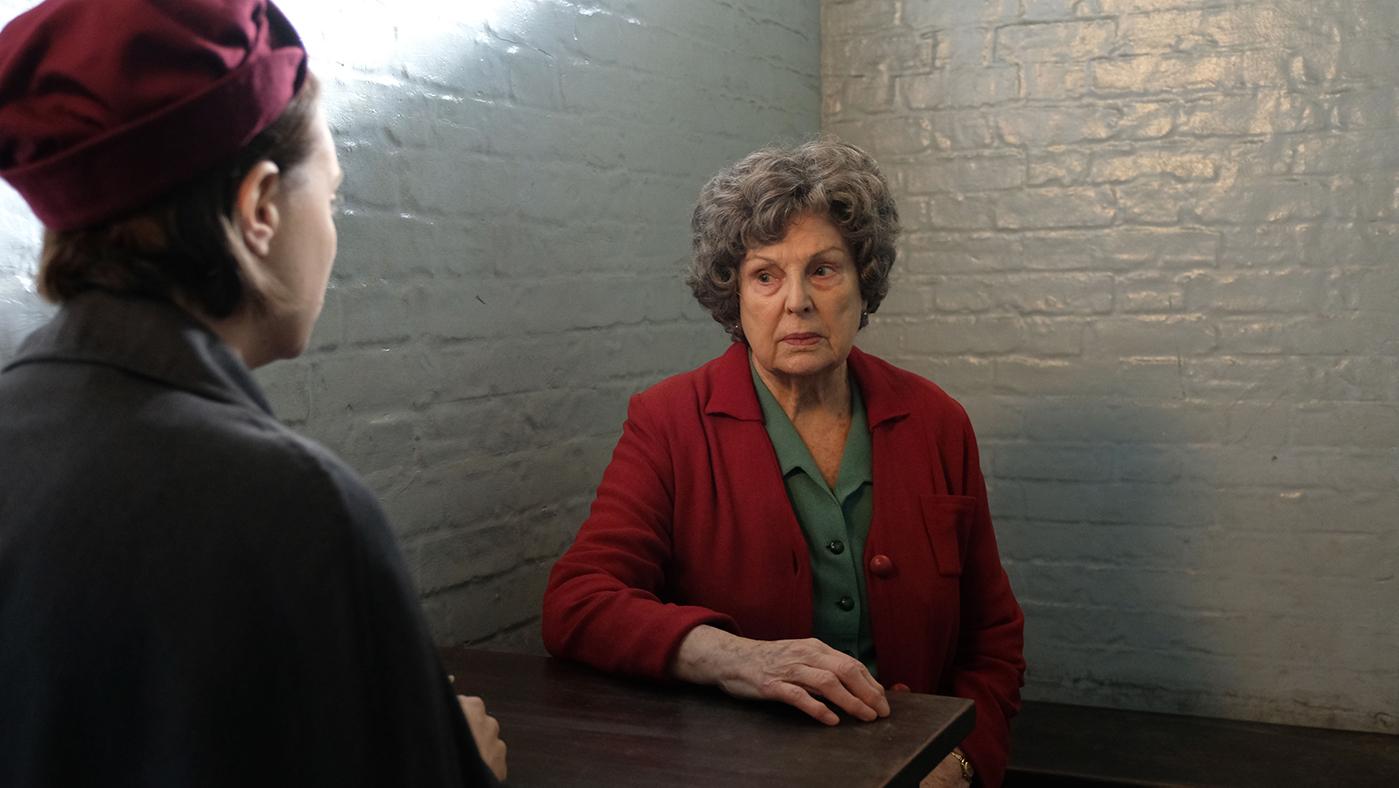 Valerie has been placed in a terrible position, torn between the law and her family. Photo: BBC/Neal Street Production

Call the Midwife airs Sundays at 7:00 pm and is available to stream for a limited time. Recap the previous episode and the following season's holiday special.

Neither Valerie nor Trixie has been able to sleep. They know that they must report Val’s Gran to both Sister Julienne and the police for conducting illegal abortions. But after they do so and Gran is brought in to the police station, she claims that the woman had tried to give herself a miscarriage, and Gran had simply found her and tried to help her – even though the young woman, still in the hospital, has already identified Gran as the person who gave her the abortion. Trixie and Val will now have to testify in court.

The Turners have their own upcoming event to dread: the departure of their foster daughter Mae for her adoptive family. Shelagh is coping by devoting herself to the planning of a ball to fundraise for an incubator for the maternity home.

While the Turners prepare to lose a member of the family, Fred and Violet prepare for the return of one. There’s been an outbreak of whooping cough at his residence, so Reggie has been sent back to Poplar for a while. But he and Fred, typically so cheery, are both unusually glum.

The Schroeder family is also afraid of the future. The eldest daughter, Julie, has cancer. Treatment has been ineffective, so all the Nonnatans can do for her is treat her radiation burns. There is some joy in the house, as Julie’s mother, Ena, is pregnant with her fifth child. Despite her feeble state, Julie watches over her mother, chiding her to rest more often.

Phyllis, at least, has something to look forward to. She’s finally being discharged from the hospital. She’s receiving generous – some might say overbearing – aid from Miss Higgins, who gives her a card with a self-penned poem about not working too hard. When Sergeant Woolf comes to visit Phyllis in the hospital while Miss Higgins is there, Phyllis distracts him by turning his attention to Higgins. He loves her poem – and it seems Phyllis has finally dealt with her unwanted admirer, by redirecting him to someone more suitable. 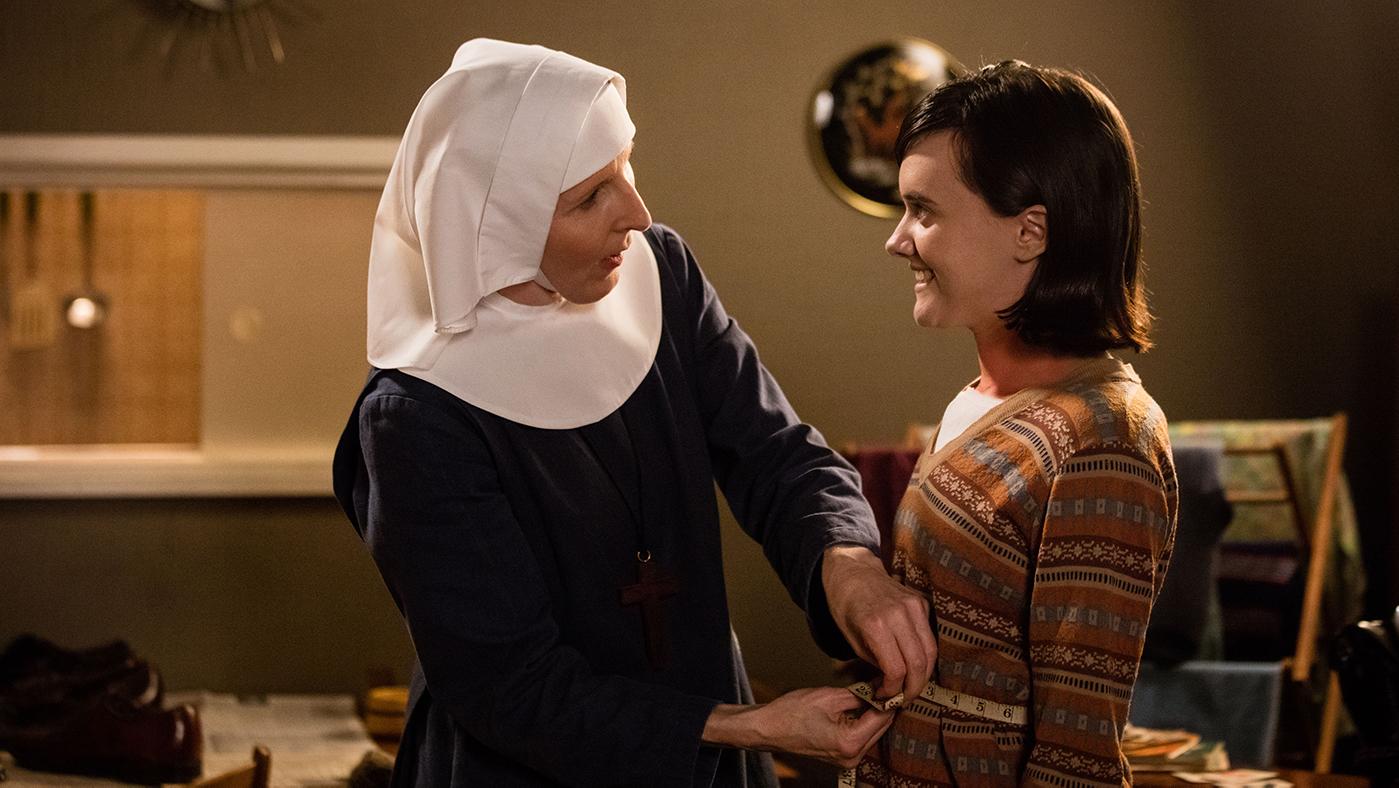 There's not much the Nonnatans can do for Julie Schroeder, other than help her enjoy a normal life while she still has time. Photo: BBC/Neal Street Production

Lucille’s admirer catches her in an embarrassing situation when he comes to drop things off at Nonnatus House and finds the nurses being measured for dresses for Shelagh’s ball. Lucille quickly sends him off on another errand, to pick up fabric from Violet. When he arrives, Violet starts to sob: her Fred and her Reggie are both so out of sorts, and she doesn’t know how to help. Cyril advises her to encourage Fred and Reggie to talk to each other about their problems, instead of intervening herself.

So Violet leaves the two of them one night with money for the pub. Fred finally admits that he’s having irritating bladder issues, while Reggie shares that he has a girlfriend, and he misses her. When Fred tells Violet about Reggie’s girlfriend, she’s at first worried that the relationship is one-sided. But she calls Reggie’s residence and learns that his girlfriend likes him just as much as he likes her. She and Fred help Reggie write a letter to his girlfriend.

Reggie tries to help Fred in return. He tells Doctor Turner about Fred’s health issues, so the doctor goes to see Fred. Fred reveals that he looked up what his pain could be in Sister Julienne’s medical textbooks, and is afraid it’s prostate cancer. Doctor Turner examines Fred and assures him that it’s not – it’s just an infection.

Julie Schroeder isn’t as lucky as Fred. The only thing that can be done for her is to help her enjoy the time she has left as much as possible. When her mother goes into labor, she dons a gown and helps Lucille with the delivery. Julie is then the first person in the family to hold her new sister. While the delivery is occurring, Sister Hilda speaks with Julie’s stepfather, a German who was a prisoner of war. He talks about the deprivation he experienced as a child, and how his sister died next to him when she was five years old. He wants to show Julie the love he would have shown his sister, but doesn’t know how. 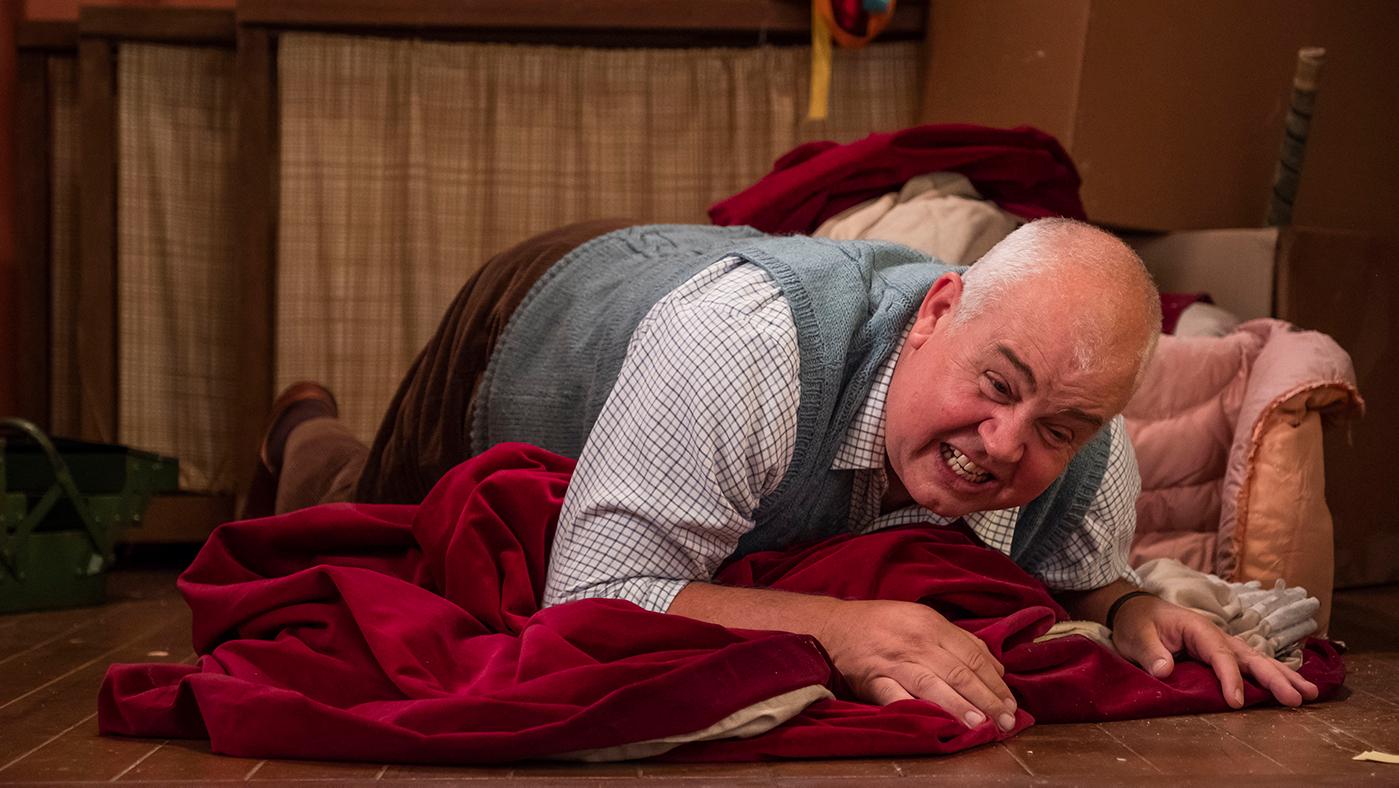 Hilda recommends giving Julie the opportunity to feel like a normal, healthy girl. Julie has expressed a desire to go the fundraising ball – she’s never been to a dance, but would love to twirl under the disco ball. Unfortunately, Fred broke the disco ball in his clumsiness. But Julie’s father is a glazier, so he fixes it in time for the fundraiser, while the Nonnatans make a dress for Julie and Hilda teaches her how to dance.

The day of the ball, however, Julie is weak with anemia. She doesn’t want to get a blood transfusion, afraid that it might make her miss the ball. Doctor Turner rushes her to the hospital and has her back in time to attend the fundraiser. It starts off with a father-daughter dance, and Julie is overjoyed to spin across the floor with her dad. Doctor Turner is also beaming as he dances: Mae’s adoption has fallen through, as the father is too sick to give her proper care, so Doctor Turner gets to dance with both Angela and Mae. The Turner family has grown by one daughter.

Later in the ball, Reggie also gets to dance with a loved one: Violet and Fred have arranged to have Jane visit Poplar and attend the ball.

Valerie’s family is in a less happy state. When she tries to visit and speak with her Gran, her Gran pretends not to be home. An extended family member accosts Valerie at the clinic, accusing her of being a traitor, until Lucille intervenes. Even more strain is put on Val when the young woman who was receiving an abortion from Gran when Val and Trixie arrived decides not to testify in court. 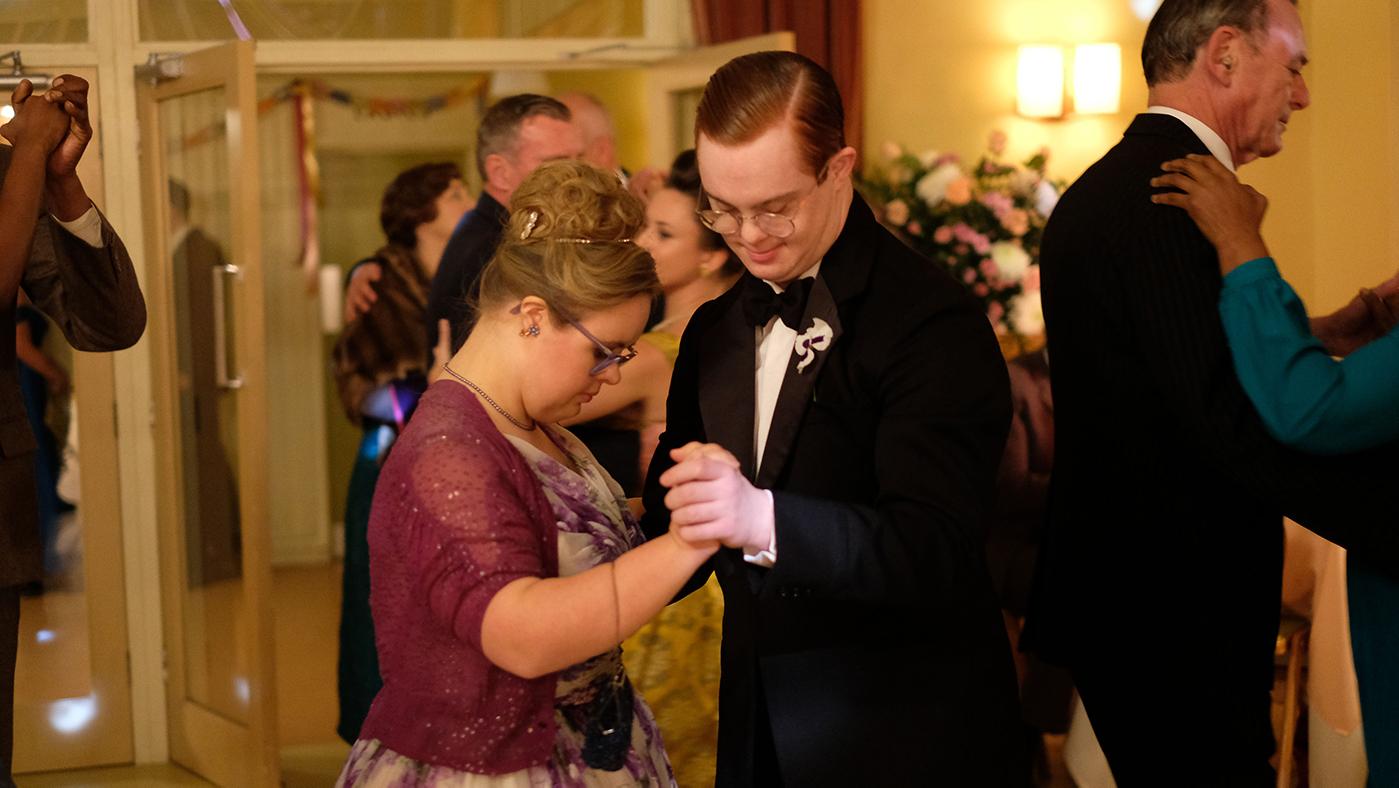 Reggie is uncharacteristically glum when he returns to Poplar, because he misses his girlfriend. Photo: BBC/Neal Street Production

Sister Frances is also struggling with the unfolding abortion case. She vividly remembers helping Val treat Cath Hindman after Cath contracted an infection from a botched abortion. Frances feels restricted in what she can do and say about abortion, and wishes she could help women like Cath. She explains all this to Sister Monica Joan, who decides to help her take action. The two sisters visit Cath’s sister Lesley and ask about Cath. They track her down, and tell her about the upcoming court case.

When the date of the trial comes, Trixie testifies first. She explains that the room wasn’t sterile and that Val’s Gran suffers from boils, then narrates the story of Jeannie Tennant’s death – but the barrister accuses her of not being impartial by bringing up an unrelated case. As Val steels herself to testify, with the support of Sisters Julienne, Monica Joan, and Frances in the audience, another witness is called: Cath. She identifies Val’s Gran as the woman who performed her abortion, and describes the terrible loss of her womb because of the infection: how every sight of a baby makes her sad, knowing that she can never have her own.

And just before Val is called to court, she is told she will not have to testify. Her Gran, hearing Cath’s story, has pled guilty and received a sentence of six years. When Val visits her in jail and apologizes, her Gran tells her it’s not her fault. It’s the way the world works, and the way it always will work unless something is done about the law. Until then, girls will continue to seek abortions from wherever they can find them, no matter how dangerous.