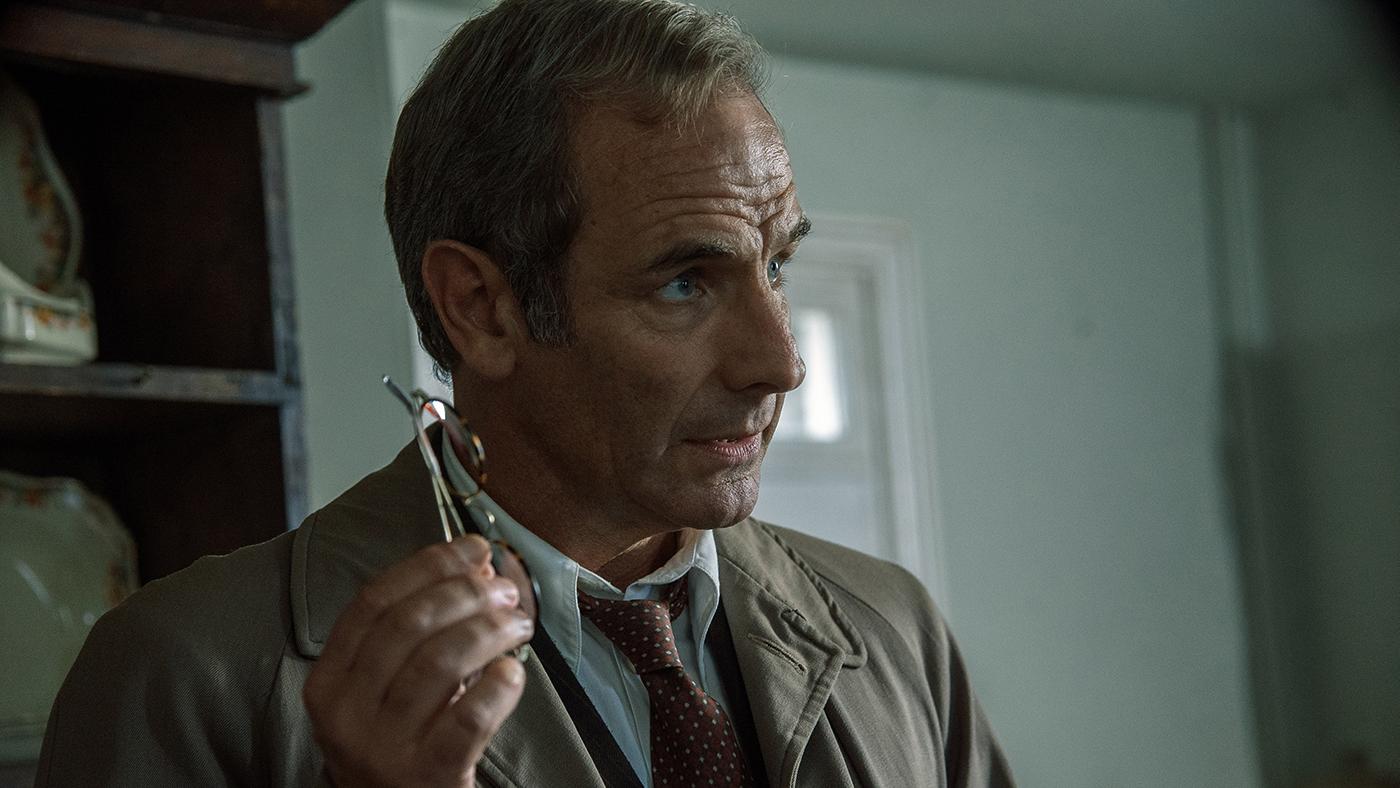 Mrs. C is having a rough time. She has severed her relationship with Leonard after discovering that he’s gay. She refuses to speak with him or even look at him and believes that he will not go to heaven. She tells Leonard that he has forced her to make a difficult decision.

In addition to that, Will, the new vicar of Grantchester, isn’t to Mrs. C’s liking: he rides a motorcycle, listens to rock and roll, and is too familiar with his congregation, telling them to call him Will and making them tea himself. Plus, although he says he’s not interested in any relationship other than with God, the young women of Grantchester are certainly interested in him.

Geordie is more friendly towards Will—mostly because he needs his help. A young boy has wandered into the police station with a shirt stained by blood that’s not his, but he won’t answer any questions. The only clue is a bible that the boy was holding, so Geordie goes to Will for aid. 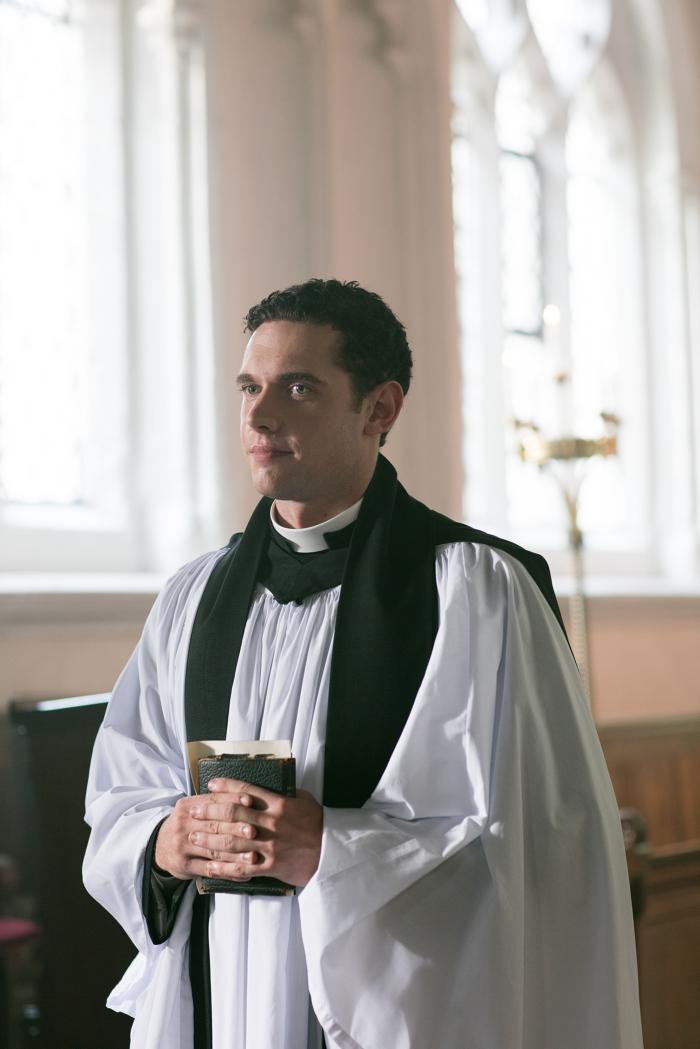 Will resists joining Geordie on an investigation because he wants to devote attention to his new duties as vicar. Photo: Kudos and MASTERPIECE Will resists joining an investigation, given all his new clerical duties, but finally acquiesces when Geordie tells him the circumstances. Speaking to the boy, Will realizes that he’s not willfully refusing to answer questions but is deaf. Will knows sign language, and discovers that the boy’s name is Adam Carter.

Will and Geordie find out where Adam lives and bring him back home to a farm. There they find Ernest Carter thundering Bible verses over his wife Miriam’s dead body, the rest of the family gathered around. When Ernest sees Adam, who is fearful and reluctant, he shouts at him, blaming him for Miriam’s death. Adam wasn’t supposed to be in the hayloft; Miriam followed him up there and fell to her death. Ernest will discipline Adam for his sin—the family are strict Mennonites. Will intervenes and defends Adam—this fire-and-brimstone cruelty is not a form of faith with which he agrees.

After chastising Will for becoming angry during an investigation, Geordie goes off to search the hayloft and finds one lens from Miriam’s glasses. She must not have fallen by accident; there was a struggle that knocked out a lens in the loft before she fell or was pushed. He also finds a red ribbon.

Meanwhile, Will speaks to other members of the Carter family. Ernest’s mother is friendly, telling Will that neither she nor Ernest were born Mennonites; they converted because of the hard-line Miriam. Hannah, one of Miriam and Ernest’s god-fearing daughters, cuts off further conversation with her grandmother, saying she needs to rest, then locking her bedroom door—Miriam’s orders.

Hannah tells Will about Miriam’s strictness and cruel beliefs. She thought Adam’s deafness was the mark of the devil and made him kneel on rock salt while he prayed. When Hannah got a book to learn sign language and teach it to Adam, Miriam burned it once she found it.

Hannah also says the red ribbon found in the loft is hers—but Will knows she thinks red is the color of the devil and realizes she must be lying. Hannah admits that she was trying to protect her sister Esther. Esther tells Geordie and Will that Paul, a farmhand, gave her the ribbon. They were going to run away together because Esther is pregnant and had tired of her mother’s cruelty.

But Miriam had figured out that Esther was pregnant. Esther was only saved from immediate punishment by the need to go to the market with her father and Hannah. When they returned, Miriam was dead.

Paul, the farmhand who was going to run away with Esther, suggests looking into Ernest. He and Miriam had recently argued over Ernest’s mother: Miriam wanted to send her to a nursing home. When Geordie asks Ernest about the argument, Ernest again rails against Adam and blames him for the death, and Will again loses his temper at Ernest.

Will is clearly concerned with the safeguarding of those who can’t protect themselves. So it’s unfortunate that neither he nor Geordie know about the sexual predator who works with Cathy and assaulted her. Cathy is still traumatized by the incident and has taken some time off work to recover—the doctor says she’s suffering from “nerves.” When she returns to the job she used to love at the department store, she must face Anthony again. He corners her in a room and closes the door, threatening her. 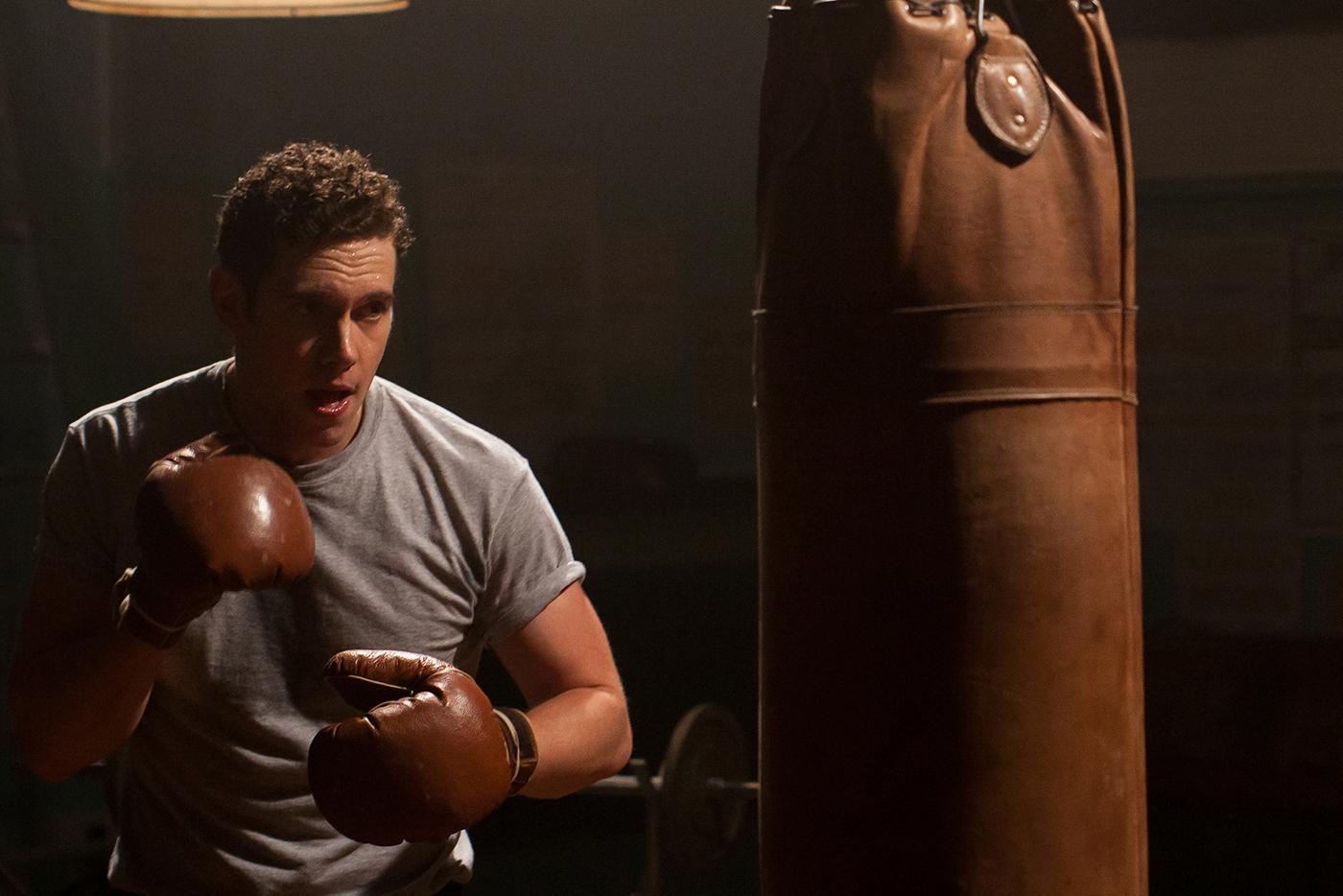 Ernest Carter's cursing of his son Adam enrages Will. Photo: Kudos and MASTERPIECE

Determined to stop anything worse from happening, Cathy makes the agonizing decision to report Anthony to her boss, who blames Cathy: she must have signaled to Anthony that she was interested. Now that she has unequivocally rejected Anthony, the “silly misunderstanding” is over and everything is fine. This is how the real world works.

Such a rejection, a refusal to even acknowledge that there is a problem, obviously worsens Cathy’s mental condition. She flinches from Geordie’s touch that evening but still tells him nothing; she has seen that she won’t be believed if she reports Anthony. Geordie remains concerned and tries to help Cathy by bringing her flowers and asking her to let him fix whatever is bothering her—but she says everything is fine.

Will may not be able to help Cathy, but he can protect Adam. When he realizes that Hannah and Esther’s stories about the moments before Miriam was killed don’t make sense given the layout of the farm, they admit that they lied to protect Adam. In truth, Adam intervened while Miriam screamed at Esther about her pregnancy, drawing Miriam’s rage to himself. He ran off, chased by Miriam, and Esther and Hannah left to go the market—a decision they regret. When they returned, Adam was holding his mother’s dead body. He signed “I’m sorry” when he saw his sisters.

When Will asks Adam who pushed Miriam from the hayloft to her death, he tells the vicar it was him. Will and Geordie can’t bring themselves to arrest Adam yet, so they leave it for tomorrow. Will desperately tries to figure out how to help Adam in the meantime. When he returns to the vicarage, he eagerly accepts an invitation to have tea with Daniel and Leonard, who are discussing what Mrs. C’s difficult decision regarding Leonard might be. Leonard, on edge, lashes out at Will for being away from the vicarage so often and storms off.

Mrs. C’s decision turns out to be a sad one, but not anything that threatens Leonard’s livelihood or safety, as he feared. She is leaving the vicarage. “What will I do without my friend?” Leonard asks. She doesn’t answer.

As Will mulls over the case, he realizes that Adam’s confession may be false. There was another member of the Carter family around when Miriam died: Ernest’s mother, Adam’s grandmother. She was appalled by the suffering Miriam inflicted on her children and by the way Ernest stood by while Miriam punished them. When Miriam began cursing Esther for getting pregnant then turned on Adam, the Carter grandmother finally decided to protect Adam, throwing a rock at Miriam and then pushing her out of the hayloft to her death.

After Ernest’s mother is arrested, Will speaks to him. Ernest admits that Miriam became cruel, as did he, but they were not always like that. Will encourages him to change, to be kind again. Ernest must take the advice to heart, for he gives Adam sign language book so that the boy can finally learn to speak.