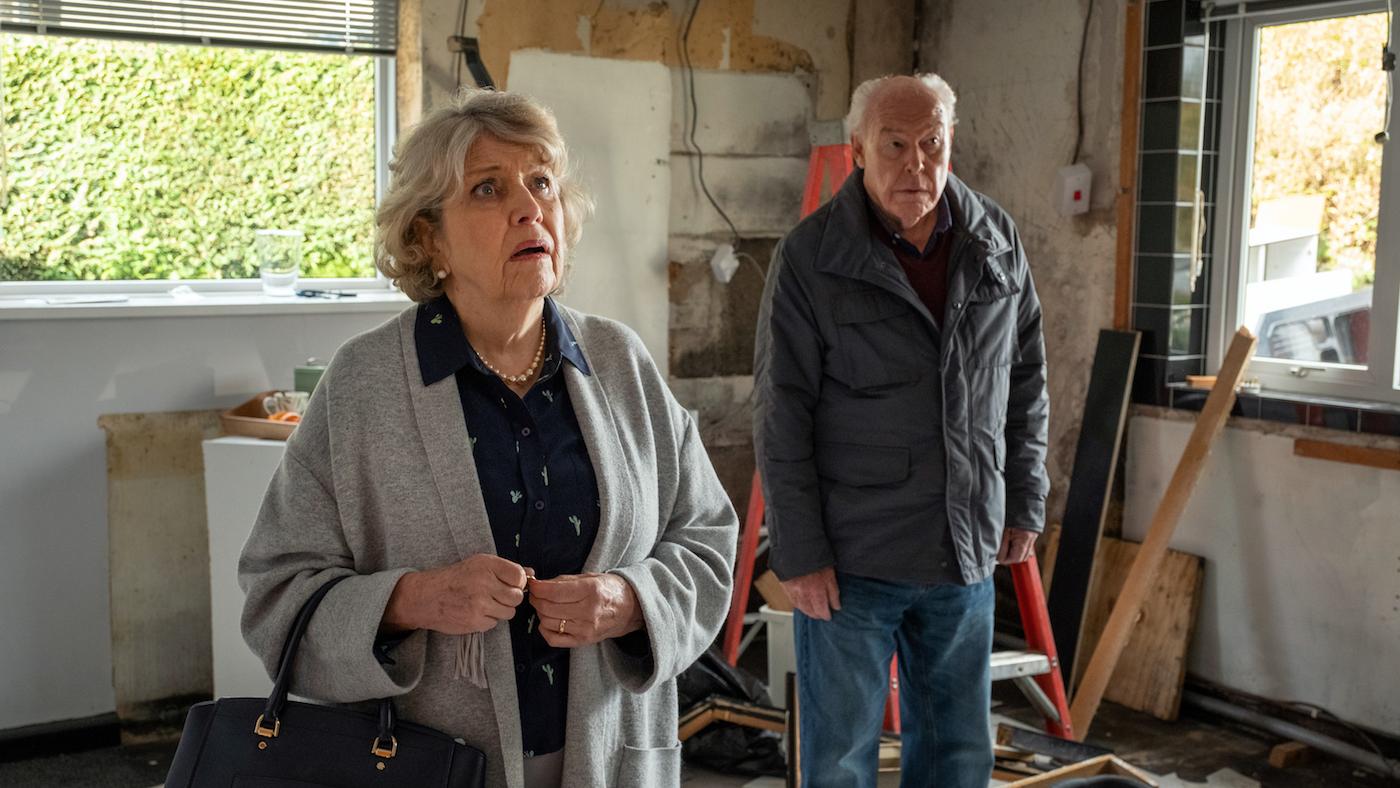 Celia must function without a kitchen for a while, and also keep Ted company while Alan works. Photo: Matt Squire

Recap the previous and following episodes of Last Tango in Halifax.

Part of the reason Alan took a job at a grocery store was to see new faces, and it’s certainly delivering. As he chats amiably with a customer, the ragtag Harrison appears, trying to nick items. The boy tries to get hot chocolate or money out of Alan, obliquely threatening to scratch his car. Alan dismisses him—but then calls Celia and asks her to take a bus to the store and pick up the Lexus, lest Harrison actually follow through.

Work on the kitchen has commenced, so it’s probably best for Celia to leave the house anyway. She’s joined by Ted, who was found wandering by a neighbor after disappearing on a rainy morning—Ted claims he was simply out on a walk. Celia continually tries to discuss the incident with him, leading Ted to eventually snap at her before softening and reminiscing about his late wife. When they meet Alan at the store, Ted’s living situation comes up. He assumed he could stay with Celia and Alan indefinitely—which is news to them.

Caroline also receives some unwelcome news: she will have to lead the Q&A at her school with Judith. As the event is being set up, Ruth drops out. She feels that Caroline only offered her the honor of being the interviewer in order to ingratiate herself into a romantic relationship. When Caroline invited her over for dinner, she was so happy to have a friend—until she realized her older colleague was trying to hit on her while she was in a rough patch in her life. “Look at yourself,” she tells Caroline before walking away.

Thus Caroline must quickly brush up on Judith’s books. Worse, when the author arrives, John warns Caroline that she’s in a bad mood—neither he nor her PA are convinced that her water bottle actually contains water. That supposition seems to be confirmed when Judith demands that her PA replace the water in a jug onstage with liquid from her bottle.

But when Caroline meets Judith, the author is kind to her while she references how shaken she was by Ruth’s takedown. “You’re the most decent person I know,” Judith tells Caroline, who then asks to have a swig of Judith’s vodka before they go onstage.

Gillian also probably needs a drink. While driving Lawrence and Mia, one of the women from New Zealand—Angus and the other woman abandoned them, perhaps because they were shagging all night, Gillian suggests—she notices an open gate on her property. One of the rubberneckers coming to gawk at the giraffe graffiti on her barn—which Banksy has denied is his work—left the gate ajar, allowing Gillian’s sheep to escape. After eating some cannabis plants, they’ve been found “terrorizing” properties and residents of the nearby village, as a policewoman tells Gillian. 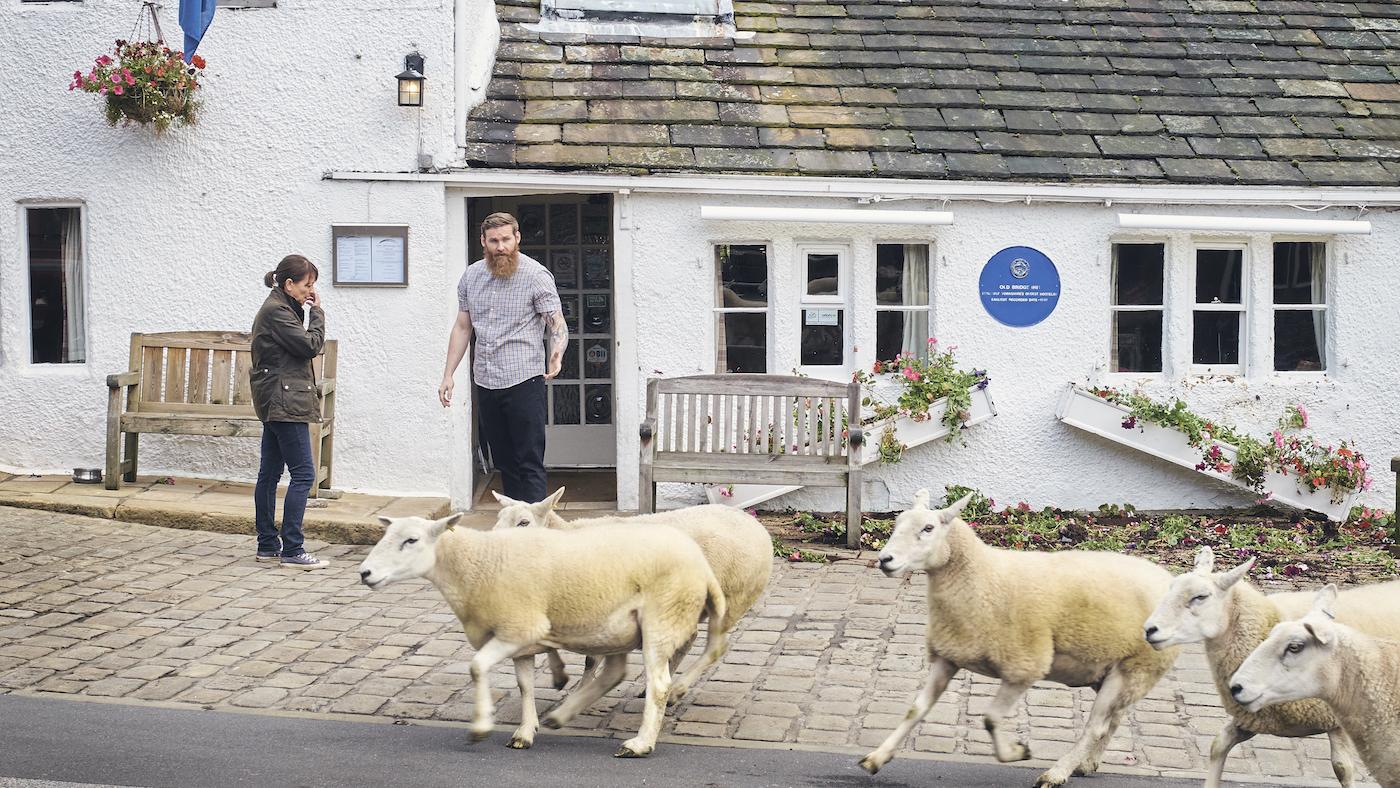 Gillian's sheep escape into the village when a person come to look at the graffiti on her barn leaves a gate open. Photo: Stuart Wood

Surprisingly enough, Caroline’s Q&A with Judith goes well—even though she accidentally drank more vodka when she tried to have water from the jug onstage. Judith mentioned that Caroline was gay at one point, and was blown away by how the students cheered.

Back at home, John asks Judith if they should even bother getting married. She responds that she had a realization today: she doesn’t love John. So no, they shouldn’t wed. In fact, John may as well leave and stop living with her, since they just haphazardly drifted into this life together.

Celia is not too happy about how Ted has drifted into her life. Now that Alan is working she’s overwhelmed by her duties: picking up Flora and Calamity from school, ushering Ted around. Plus, the kitchen is completely stripped and useless for a couple of weeks, and the workers left while she was at the grocery store.

Gillian isn’t sure she can keep afloat on the farm, much less pick Calamity up from school now that Celia won’t. Two of her sheep were killed and seven are still missing. She’s considering selling the farm, she tells Alan. She had asked Sotheby’s to evaluate the giraffe graffiti in the hope it would be worth something, but now she has simply reported it to the police as vandalism.

After rounding up what sheep she can find, she drops Lawrence and Mia off at Caroline’s to stay for a while. She and Caroline commiserate over their suddenly imploded lives. Caroline is reeling from Ruth’s denunciation, and rethinking whether she can make it as a single parent; Gillian’s not sure she can run the farm alone. Both say they need a partner; Caroline even admits to missing John.

Lucky for her, later that night he shows up at her home, asking to stay. As she refuses, Judith calls. She thanks Caroline for the Q&A and says she had a big realization. Then she asks Caroline out to dinner.

Celia gets her own surprising call, from Nadine, Ted’s daughter. Nadine wants to make sure Ted is okay, and tells Celia to ask Ted about Angelina. Celia eventually does, and Ted reveals to her and Alan that he lost all the money from selling his house. Angelina is a younger woman he dated for a while, who encouraged him to sell the house—and then invest money in her brother’s company. When Ted eventually reported it to the police, he learned that Angelina and her brother have run this scam before.

Ted may not be the only one who’s been scammed. The kitchen workers show up at Celia’s door and tell her that their boss has disappeared. He owes them six weeks’ wages. And Celia and Alan don’t have a functioning kitchen.