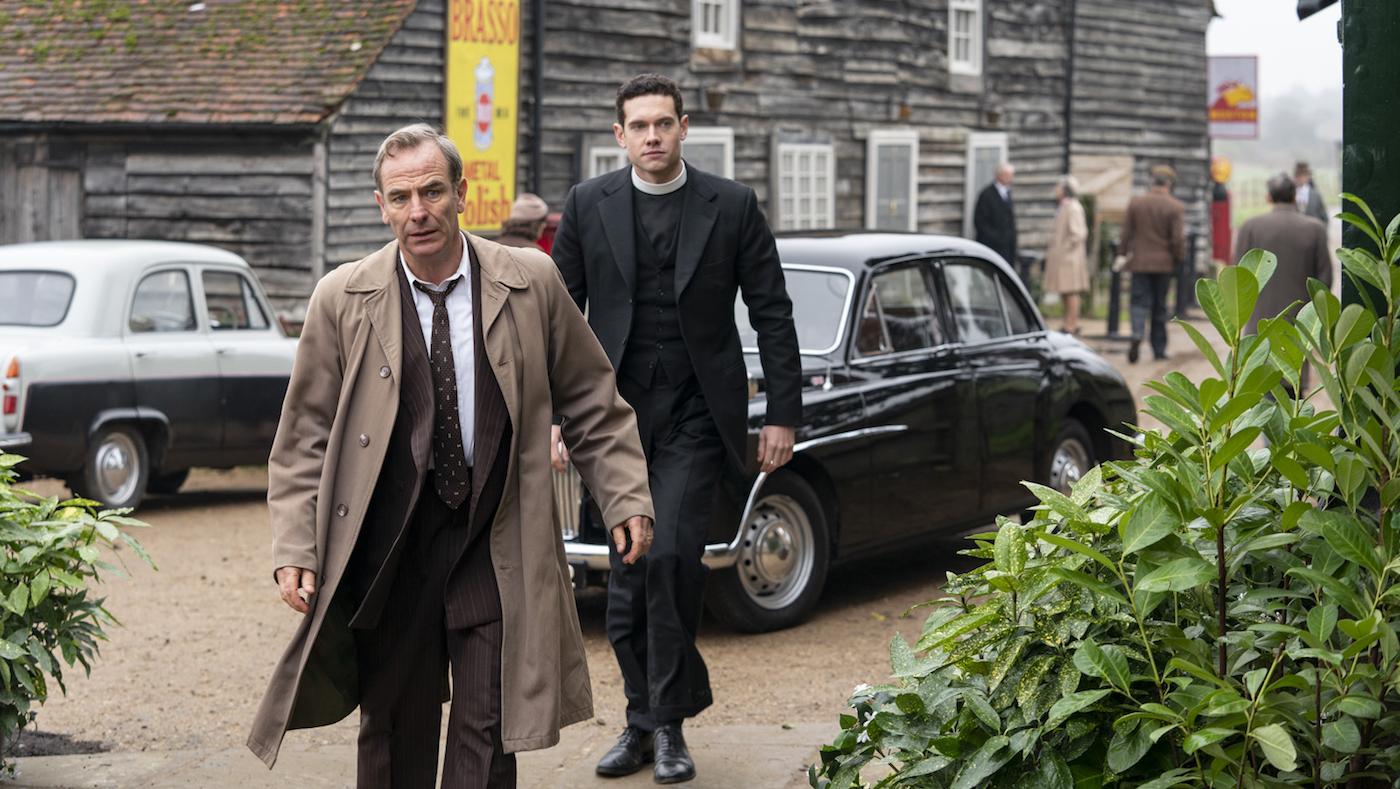 Geordie and Will get things wrong in their belief about a missing person. Photo: Kudos/ITV/Masterpiece

Grantchester is available to stream. Recap the previous episode.

Will is at a low point. He shows up to his mother’s wedding to St. John, despite his clearly expressed disapproval of the union. He’s raging drunk, gulping straight from a champagne bottle, and his mother stiffly chastises him, grabbing the bottle: “This is not who you are.”

He wakes up the next morning with a painful hangover. He asks Leonard to lead his church service for him, even though Leonard’s estranged father is due to visit. But he’s not off the hook: Geordie needs his help with a case. A woman named Nora Martin has been found dead by stabbing on Jesus Green, laid out in a crucifix position. She has her marriage certificate on her.

As Geordie and Will go to visit Nora’s family, Geordie tells Will that he saw Matthew. The boy is staying at a hostel, working odd jobs. Geordie gave him money, and Matthew asked if Will had asked after him. Will can’t bring himself to face the boy after what happened with Vic.

Nora’s husband Frank and son Robin are surprised to hear of Nora’s death: she went missing five years ago, leaving her wedding ring behind. And yet: she was wearing a ring when found dead. It has an inscription from the Song of Solomon—she was a nun.

Leonard’s father arrives just as church is about to begin, but he declines to hear Leonard say mass and instead waits for him at the pub. Their eventual conversation there is awkward, with Leonard’s father mourning the death of an old pub friend, Gideon, and Leonard trying to ask about his mother. When Leonard later brings his drunk father back to the vicarage for the night, his father cries while again bringing up Gideon and saying that he let his wife down. Upon hearing that Leonard has rarely seen his father cry, Daniel suggests to Leonard that his father was in a gay relationship with Gideon.

Will and Geordie visit a nearby convent and learn that Nora—Sister Eleanora—lived there. The mother superior, Sister Grace, is curt and directs her charges, like the worried-seeming Sister Michael, with a firm hand. After a bell rings calling the nuns to prayer, Sister Grace refuses to answer more questions.

Having pulled the missing persons files to see the report on Nora Martin, Geordie recognizes another missing woman: Lavinia Jones is the convent’s Sister Michael. Geordie speaks to her parents, who show him photos. Geordie recognizes Sister Grace in one, and Lavinia’s parents say she worked with their church but was excommunicated due to some scandal with a man.

Meanwhile, Will returns to the convent to try to speak with Sister Michael. Sister Grace has ordered the nuns not to let Will or Geordie in, and another sister soon pulls Sister Michael away from the conversation.

As Geordie looks through more missing persons files, he realizes the convent is full of missing women. He raids it at night, and finds Sister Grace sitting with a young girl named Hattie. She lives at the convent, and Nora was her mother.

Back at the pub with his father, Leonard asks if his mother knew about Gideon. He angrily berates his father for carrying on a relationship while he was married. His dad denies things, then threatens Leonard and leaves. When Leonard later enthuses to Daniel about standing up to his father, Daniel tells him he was cruel—his father is suffering, and Leonard is acting the bully, just like his father.

Sister Grace is calm under questioning. She says she was excommunicated because she was trying to escape the control of men, and that the convent exists through an understanding with a priest—with whom she had an affair. Hattie is Nora’s daughter with Frank, though he doesn’t know she exists. Geordie reunites Hattie and the nuns with their families.

But later Will sees Lavinia at the police station, with bruises on her face. She begs him not to send her back to her parents. Perhaps Will and Geordie got the convent wrong. They rush to the Martin household and are relieved to find Hattie safe. But then they notice that the rug has been changed. Underneath is a blood stain.

Frank calls Nora a bitch for leaving him and Robin. He says he saw her at Jesus Green, went home with her and argued, then stabbed her.

Will goes to Sister Grace and apologizes for mistaking her mission: she wasn’t holding the women captive, they were all escaping something. She says Nora was going to register Hattie at school when she was killed; hence the marriage certificate. Will opens up to Sister Grace, telling her about his misplaced trust in Vic. She sympathizes with him about the standard of perfection holy people hold themselves to, and says he reminds her of the women who sought shelter at the convent. He says he’s afraid that if he makes a mistake he’ll keep falling; she replies that “I didn’t keep falling,” and kisses him.

Will wakes up the next morning—his birthday—having slept with Sister Grace, and feeling much freer.

Geordie thinks Frank Martin is lying: he says he stabbed Nora once, but she was stabbed multiple times. Remembering that she was going to register Hattie at school, Will realizes Robin, her son, must have run into her. She came home with him to talk things over, and he killed her—“She didn’t love me,” Robin tells Geordie, scarred by her departure from his life. Frank helped Robin bring the body to Jesus Green, directing suspicion towards the convent.

Feeling liberated, Will asks Ellie out for a drink. He wants to start their relationship anew. He also visits his mother, telling her that, while he doesn’t like St. John, who she marries is her decision. They reconcile—and he asks to borrow some money.

He then goes to see Matthew, telling him he was ashamed of involving him with Vic. He then gives Matthew the keys to the boxing gym. He’ll bankroll Matthew to run it.

Geordie decides to make his own difficult visit, telling Cathy that he will go see her institutionalized mother with her, however hard it may be.

Leonard’s father is leaving—he’s incensed with Leonard, and threatens to reveal Leonard’s homosexuality to the church. Leonard tells him to go ahead; he’s no longer ashamed of being gay, and he is in love with Daniel. Mrs. C later sits with him in church, and he tells her that she’s more of a family to him than his father is. “I love you,” he tells her.