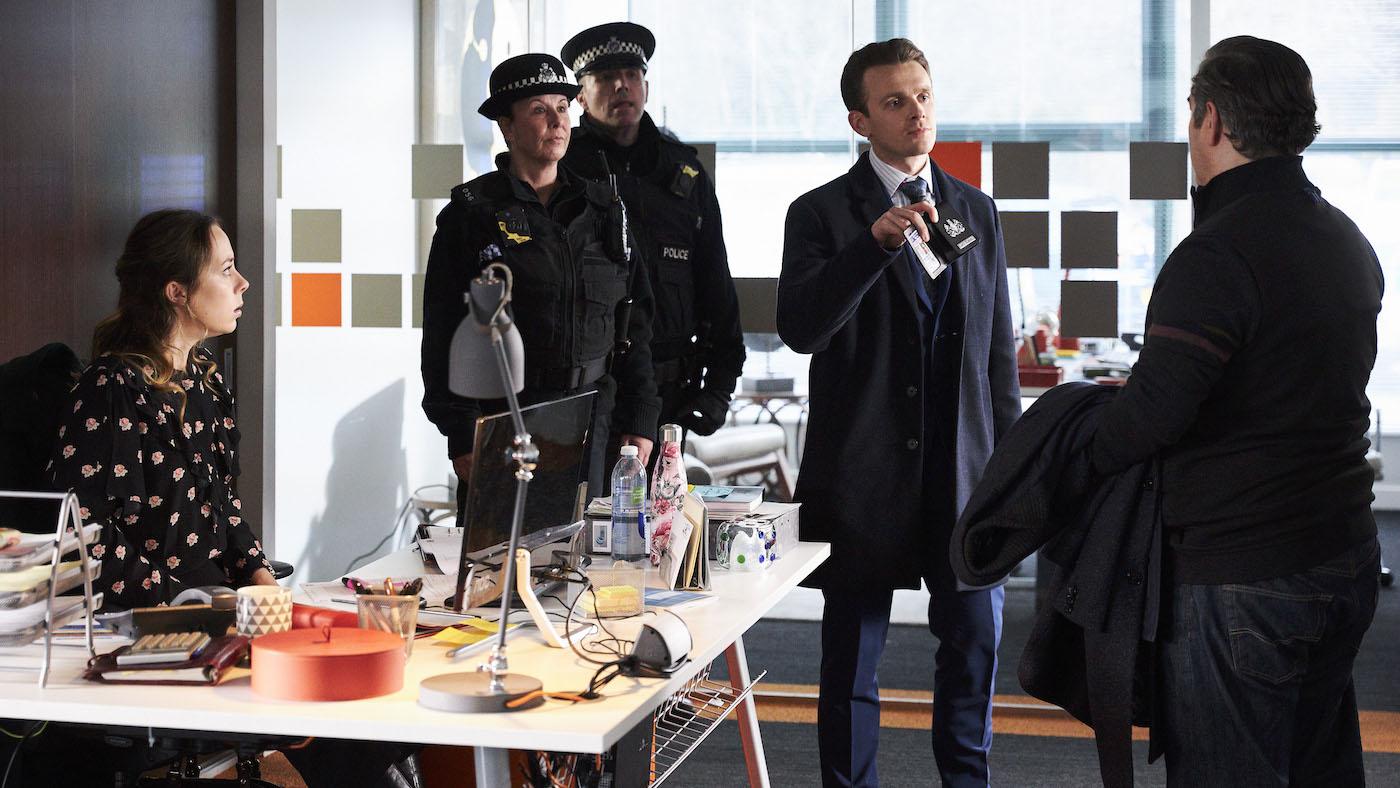 Arrests are made as the investigation comes to a close. Photo: Mainstreet Pictures LTD

Unforgotten is available to stream. Recap the previous episode and previous three seasons.

Everyone is in crisis. Cassie’s loved ones rush to the hospital to learn her condition after a head-on car crash. Sunny checks in with the coroner, the last person to see Cassie with a nervous question: Do you think she did this on purpose? Cassie was distracted and tired, the coroner reassures Sunny. His next thought is: could one of their suspects have done this in desperation? The vehicle that hit Cassie fled the scene.

The suspects are indeed under enormous stress. Liz tells her fiancée about the “terrible night” of Walsh’s death and how it prevented her from ever getting close to someone—until she met her soon-to-be wife.

Anna tells Ram that she has decided to keep their baby, who will have Down syndrome, even in the face of the possibility that Ram might go to jail.

Fiona has confessed everything to the police. Geoff tells her that he’s hurt by her secrets and he’s angry at himself for not knowing about Fiona’s past for all these years—but he still loves her, somehow. They will try to move forward, whatever happens.

Cassie goes into brain surgery. While waiting in the hospital with his partner Sal, Sunny asks her if she would marry him. Yeah, I would, she replies, exhausted but with a faint smile.

Cassie’s father, sitting by her bed after surgery, tells her that he got her voicemail. Everything will be normal again, he promises; his memories are coming back. Outside, her son Adam tells her partner John that he has made Cassie happy.

Another intergenerational connection occurs outside the hospital, as Matthew Walsh’s son Jerome—who never met Walsh—goes to meet his uncle Clive for the first time.

The investigation continues, and more information emerges about Dean’s obscured past. An older brother, Steven, didn’t take part in the family’s crime. But he was stabbed to death in 1989. No one was arrested, but it seemed like the family knew who the murderer was but closed ranks to the police.

Furthermore, an account set up by Dean in the name of his godson recently had ten thousand pounds deposited—unusual in the account’s activity—and then immediately transferred to an account under the name Grace Williams—Ram’s ex-wife. Ram’s ex-wife knows nothing of the payments, or years-old ones of five thousand pounds moving between the two accounts regularly.

When Ram is arrested, he punches one of the officers.

After he is told that Fiona has talked, Ram changes his story and says that Rob Fogerty spotted Walsh the night he disappeared; it was Rob who wanted to scare Walsh. Ram followed and never found the others or Walsh. He started walking home and was picked up by them later when they passed him on the road.

Ram also claims not to have met with Dean recently, and answers “no comment” when presented with the fact that he called a customs officer the day after the money from Dean appeared in his ex-wife’s account. Finally, under the mounting evidence, he tells his story. He didn’t kill Walsh; he found him bleeding—he must have tripped—and gave him CPR. I’m not a murderer, he insists.

Dean claims to have slept through the events of the night, despite what he told Cassie. When Sunny reveals that the police know he was smuggling cocaine with the help of Ram—hence the money transfers and calls to customs—he also says “no comment.”

But the pen used to kill Walsh has a serial number that reveals the buyer: Dean’s brother Steven. The pen was engraved “D.B.”—Steven encouraged Dean to escape their criminal family. Sunny also realizes that Matthew Walsh and Dean’s family lived near each other, and were probably rivals in crime. Walsh may have been Steven’s murderer.

Presented with this, Dean admits everything. He grew up in a violent family and tried to escape it. But when he found Walsh—his admired brother’s murderer—unconscious from tripping that night before anyone else, after trying to avoid the situation by staying in the car for a long time, he couldn’t stop himself from committing an appalling act. When he saw Ram approaching, he left, then appeared later, while Ram was giving CPR.

As Ram is being arrested, he tells the police that his first thought upon finding Walsh was to call an ambulance, no matter the effect on his new career. But when he saw the way everyone looked at him, he knew immediately they would all blame him.

Ram, Fiona, and Liz all face possible prison sentences. Liz apologizes again to her supervisor, telling him she always thought it was an accident. When she gets out of prison, she wants to help others as much as possible, as reparation. (She gave her mother’s caretaker a substantial sum of money.) Your exemplary career over the past three decades has been reparations, her supervisor tells her.

Dean asks the police to tell Walsh’s family that he’s sorry. He has always regretted his failure to escape his family’s violence.

Cassie was hit by a car thief, not any of the suspects. Excited to share news that they solved the Walsh case, Sunny heads to the hospital after her surgery. He sees John despondent in the hallway and the smile falls from his face. Cassie will not survive.

As the family learned this news, Cassie’s father walked out and sat on a bench outside to listen to her voicemail on repeat. She apologized, promising that she understands why he changed his will and that she will try to be better, especially once she’s done with police-work in a few weeks. She listed the memories he recalled to her at her hospital bedside, and asked to take him and Jenny out to dinner. I love you so much, she said before hanging up.

Sunny gives Cassie’s eulogy: the best detective he ever met, she treated everyone the same without judgment. We need more like her, he says. He lays flowers at her grave, which reads, “She longest lives, who most to others gives, herself forgetting.”