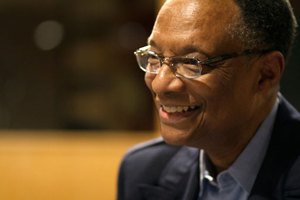 Funding for Legends of Jazz with Ramsey Lewis is provided by:

Legends of Jazz with Ramsey Lewis

Legends of Jazz with Ramsey Lewis

You don't have to love jazz to love this new music series beginning in April.

Guests: Clark Terry, Roy Hargrove and Chris Botti
The importance of the trumpet in jazz cannot be overstated, and the legends who have made their mark, from Louis Armstrong to Roy Eldridge, from Clifford Brown to Dizzy Gillespie and Miles Davis, will all be the topic of the day when three of the finest trumpet players in jazz join Ramsey Lewis on stage. What a wonderful cross section of trumpet sounds from the legendary Clark Terry, who seems to make the trumpet actually talk when he plays, to the high energy innovations of hard-bopping Roy Hargrove, to the romantic and intimate ballad playing of Chris Botti. This show will leave you feeling that you know much more about the trumpet than when you arrived.

Guests: Al Jarreau and Kurt Elling
Al Jarreau is the only vocalist in the history of the Grammy's to win awards in three different categories (Jazz, Pop and R&B). He's been compared to such legends as Billy Eckstine and Johnny Mathis, and has been thrilling audiences since his 1975 debut, the top-selling "We Got By." Multiple Grammy nominee Kurt Elling is one of the great modern proponents of the "vocalese" tradition of marrying original lyrics to classic jazz solos. Al and Kurt perform and talk with Ramsey Lewis about the great male vocalists and their own lives and times on stage and in the studio. Although approaching jazz from two opposite directions, these two master vocalists, Al Jarreau and Kurt Elling, came up with a duet on "Take Five" that will become a classic. Check it out!

Guests: Pat Metheny and Jim Hall
Pat Metheny has been one of the most unique forces in jazz guitar for more than 20 years. His music - with its blend of jazz, rock, folk and electronic elements - is highly original and enormously popular, allowing him to sell out arena venues. He appears in this episode with Jim Hall, NEA Jazz Master and a musician of understated elegance who is considered one of the greatest living jazz guitarists. Although Pat Metheny, the wonderful contemporary guitarist, says that he has always looked up to Jim Hall, you will witness this as simply a musical love affair between two great artists.

Guests: George Duke, Lee Ritenour and Marcus Miller
Lee Ritenour, Marcus Miller and George Duke have played together in the past, but in this episode they perform with energy, creativity and as though they had been playing together for years. Master guitarist and contemporary jazz legend Lee Ritenour, keyboardist George Duke and the phenomenal bassist/producer Marcus Miller perform together and share the musical progressions that led to the creation of the various sub-genres that we call "contemporary jazz." The trail ranges from the soul/R&B/funk inflected jazz beginning in the late 1950s into the '60s with artists such as Horace Silver, Herbie Hancock and Ramsey Lewis; the creation of Rock Fusion in the late 60s and into the 1970s by artists like Miles Davis, Weather Report and Chick Corea; the melding of pop and jazz in the 1980s with artists such as Spyro Gyra, the Yellowjackets, and Lee himself, and on into the Smooth Jazz era that characterizes contemporary jazz today.

Guests: David Sanborn and Phil Woods
Charlie Parker, Johnny Hodges and Benny Carter are just a few of the altoists that have influenced this episode's guests David Sanborn and Phil Woods. The hard-driving Sanborn is, of course, one of the best known and most identifiable voices on the contemporary jazz scene for the past 20 years, while Woods has established himself over many decades as one of the legends on the instrument. Although from opposite sides of the musical fence, Phil Woods and David Sanborn, separately and together, have created something very wonderful on this show.

Guests: Dave Brubeck and Dr. Billy Taylor
Art Tatum, Teddy Wilson, Oscar Peterson, Bud Powell, Count Basie and Duke Ellington are just some of the piano legends talked about by two living legends themselves - Dave Brubeck and Dr. Billy Taylor. The reputations of these two great legends are widely known and respected. Here they show us why. These two 85-year-old masters put on an incredible show in both solo and duet numbers, and offer fascinating reminiscences.

Roots of Jazz: The Blues

Guests: Robert Cray and Keb' Mo'
In the beginning, jazz and blues started out on the same track before diverging into two separate genres, and in the early 20th century, the two forms borrowed liberally from each other as they took their first formative steps. In this episode, Grammy winners Robert Cray and Keb' Mo', talk about what jazz has taken from the blues, and how the two uniquely American forms of music have intertwined over the years. Robert Cray and Keb' Mo' in their own highly distinctive styles remind us that the blues can be entertaining as well as innovative.

Guests: Jane Monheit and John Pizzarelli
From the 1930s to the 1950s, American songwriters created an unequaled body of work we call The American Songbook. Many of these tunes have become our "standards" and they are linked forever to the jazz and pop singers who gave them life. Guitarist/vocalist John Pizzarelli and top jazz singer Jane Monheit talk with Ramsey Lewis about what jazz has taken from (and given to) the great American popular song composers, from Irving Berlin to Gershwin and beyond. John Pizzarelli and Jane Monheit sing both separately and in duet to demonstrate why they are so well loved as are the songs they perform … and why this great music continues.

Guests: Eddie Palmieri and Dave Valentin
This episode looks at the evolution and current state of Latin Jazz. Keyboard legend Eddie Palmieri and flute virtuoso Dave Valentin perform and talk with Ramsey Lewis about the genesis of Latin Jazz, from the early days of Xavier Cugat and the rumba, to the Afro-Cuban stylings of Dizzy Gillespie and Charlie Parker (picked up from Latin jazz giants Chano Pozo and Machito), to the great Latin Jazz artists of the 1950s and early '60s, including Chico O'Farrell, Perez Prado, Tito Puente, Mongo Santamaria, Ray Barretto, Willie Bobo and more. During this show, not only were people tapping their toes as usual, but it was all we could do to keep them in their seats while Eddie Palmieri and Dave Valentin spun their high-energy magic.

Guests: Benny Golson, Chris Potter and Marcus Strickland
Almost more than any other instrument, the tenor seems to be able to encompass all the infinite shades of jazz. Veteran sax man Benny Golson (who has performed with Lionel Hampton, Dizzy Gillespie and Art Blakey); and Chris Potter, the fiery young horn player who has performed with everyone from the Mingus Big Band to Steely Dan; as well as rising young star Marcus Strickland play individually and together and talk about their lives in music and influences such as Coleman Hawkins, Lester Young, Sonny Rollins, Coltrane and Stan Getz. The legendary Benny Golson's tenor saxophone performance demonstrates that he is quite at home playing with the young lions. Chris Potter, the ever dependable innovator, and the surprisingly fresh Marcus Strickland gave us performances to remind us that jazz continues to be in good hands.

Guests: Oscar Castro-Neves and Ivan Lins
The early days and the current groove of jazz from Brazil are explored in this exciting half-hour. Guests include the legendary Oscar Castro-Neves, a contemporary of Tom Jobim, Luis Bonfa and Joao Gilberto, who was on the scene as a major player when the Bossa Nova was being created, and Grammy winner Ivan Lins, the keyboardist/composer whose songs have been recorded by artists ranging from Quincy Jones to Ella Fitzgerald and many more. Ivan Lins and Oscar Castro-Neves through their music show us why the music of Brazil offers something highly stimulating for the heart, body and soul.

Guests: Joey DeFrancesco and Dr. Lonnie Smith
In this episode we celebrate the world renowned Hammond B3 organ's role in jazz, and take a look back at the legends who helped take the B3 out of the church and auditorium and into the smoky clubs, roadhouses and recording studios where it gained its fame. Joey DeFrancesco (a former B3 prodigy who made his debut recording at the tender age of 18) talks about his relationship with the B3, and with the instrument's most famous proponent, the late great Jimmy Smith. Dr. Lonnie Smith, a giant of the B3 since the 1960s, discusses those legendary days, while both artists talk about the part they have played in the current global renaissance the "Killer B" is enjoying. Joey and Lonnie perform individually and together in this high-energy episode. There are not many instances where two great organ players come together on the same stage. Joey DeFrancesco and Dr. Lonnie Smith literally burn the studio down with their high energy performances.

Guests: Tony Bennett, Chick Corea and Ray Barretto
The title of this show says it all. These three legendary gentlemen -- Tony Bennett, Chick Corea and Ray Barretto - have earned their stripes and are still at the top of their game. This show features incredible performances and fascinating, intimate conversation with three winners of the prestigious National Endowment of the Arts Jazz Masters award from 2006. Join us as we honor Tony Bennett, one of the world's preeminent male vocalists, and a giant figure in both jazz and pop; Chick Corea, the composer, arranger, keyboardist, pianist and bandleader, who is best known as one of the great innovators who literally changed the shape of modern jazz by helping create the jazz fusion movement of the 1970s; and Ray Barretto, the most widely recorded conguero (conga player) in jazz. This episode is in memory of Ray Barretto (1929-2006).

Funding for LEGENDS OF JAZZ with Ramsey Lewis is provided by E*TRADE FINANCIAL, Marantz, National Endowment for the Arts, and the International Association for Jazz Education.

LEGENDS OF JAZZ with Ramsey Lewis is a co-production of WTTW National and LRSmedia.

Funding for Legends of Jazz with Ramsey Lewis is provided by: