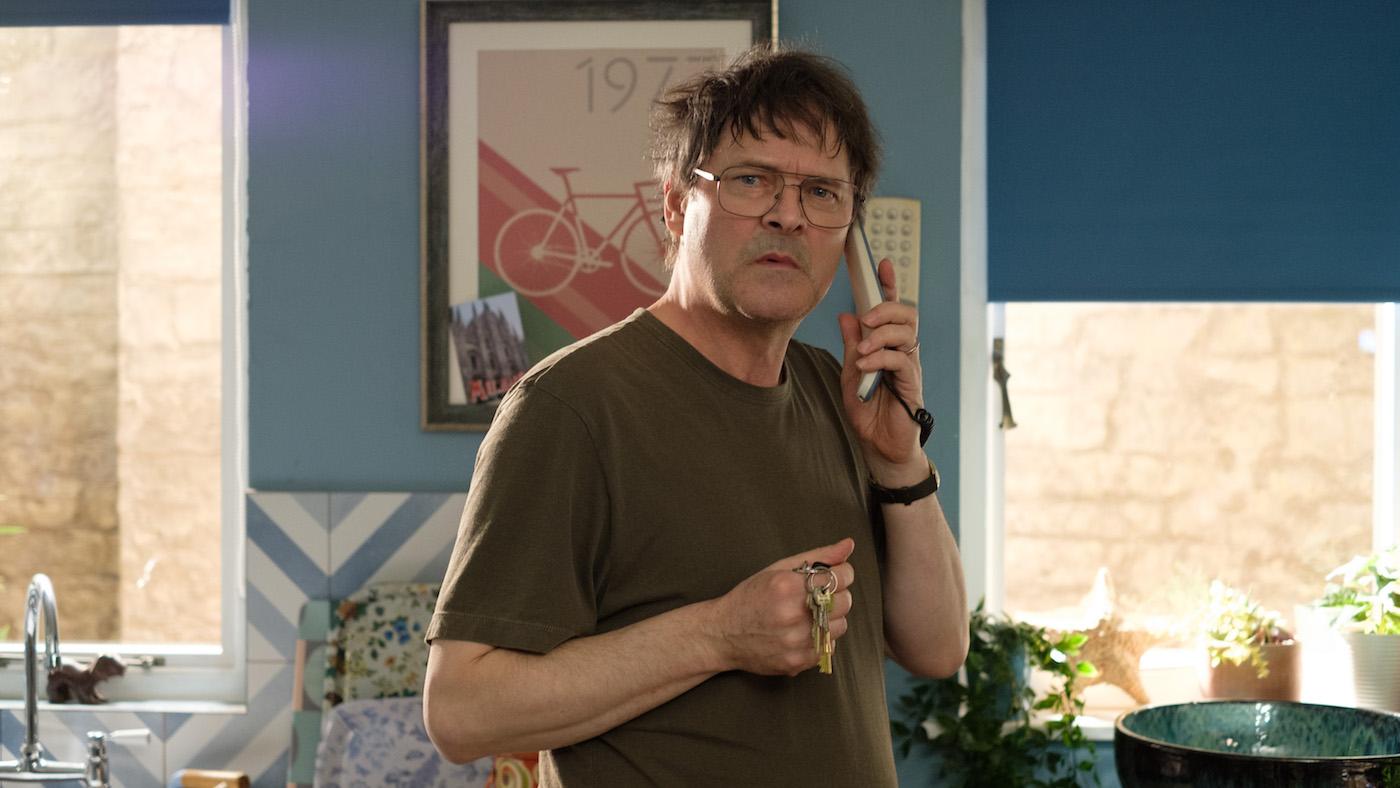 Peter ends up in an awkward situation when Maggie decides she needs a night away to process the revelation of a secret regarding Jamie. Photo: Joss Barratt for Genial Productions Limited/ITV Studios Limited

Peter wakes up in bed alone; Maggie’s asleep on the couch. Despite appearances, she didn’t sleep separately from Peter out of anger at him—she just fell asleep watching TV, trying to stop thinking about a revelation that Peter and Jamie have a secret they have kept buried for ten years. Maggie doesn’t want to talk about it with Peter, and she’s not going to work—she needs time to think.

The revelation has distressed Becka less than Maggie, and she’s supportive of Jamie, who says he always wanted to tell her but the time never seemed right. Becka understands that carrying a secret for so long has been hard on Jamie.

So what is this big secret? When Karen checks on Peter at work to see how he’s taking the revelation of it to the whole community, he explains. Jamie used to box, and put someone in a coma for two weeks while sparring, from a single punch. It wasn’t his fault; the person had an undiagnosed clot on their brain. But Jamie has always blamed himself, and the guilt nearly destroyed him.

Just then, Maggie calls. She’s going to get a room at the pub for the night. She can’t think straight, and needs a night away. While she’s there, she’ll also apologize to Brian for spreading rumors about him.

Syd, the bartender, wants to protect Brian from Maggie. As Maggie apologizes, Syd defends Brian as a great person. When she was younger, she would try every night to order alcohol at the pub, and he always kicked her out. Eventually, he gave her a job, realizing that she wasn’t trying to get drunk; she was just trying to avoid home.

But as Syd lauds Brian, he suddenly stops her with a shout and walks away. When Syd goes to check on him in his room above the pub, Maggie follows. He tells them to sit down. The rumors that he’s in witness protection aren’t true, but Maggie was right that he’s in hiding.

Brian comes from a military family, he explains, so he had no choice but to enlist himself. He fortunately never saw action, until he was ordered to ship to Afghanistan. It was then that he deserted. I’m not honorable, he says. I’m just a coward.

Maggie and Syd both praise him, however, for leaving something he was forced into despite the possibility of being court-martialed and sent to prison. I stand by everything I said about you, Syd says, and Maggie agrees with her. Brian accepts Maggie’s apology, too—but they don’t have any rooms available for her that night. And the gun in Brian’s room? It’s his grandfather’s old service revolver.

Neil and Kelly are spending the night away, on their anniversary, so Roxie is staying at their house with their son Josh. Now that Alex has finally begun speaking to her again, he’s coming over with pizza, as she tells Jill at school. Everyone deserves a second chance, she says about Alex, after teasing Jill about spending the night at Marcus’s—Roxie saw him drop Jill off at school in the morning.

Alex is becoming increasingly agitated as his deadline to pay off his debtors nears. Visiting his grandmother at her care facility with his mom, they find her frantically searching for something in her dementia—leading Alex to recall how he found a large stash of cash under her bed when he cleaned out her house. This is the money he hid in the keep, and that Neil found and later burned. As Alex and his mother leave, his debtors call, and he promises that he’s getting the money back that evening.

Peter’s evening is odd. When Karen hears that he’s on his own for the night, she suggests that they get fish and chips and stay late at the office to do some work. After everyone else has left school, as they eat dinner, Karen kisses Peter. Just then, Jill passes by in the hallway and sees, before rushing away. She had returned to school to pick up her keys.

Peter pushes Karen away and says she has received the wrong signal, but she’s persistent. Doesn’t he see how Maggie has ruined his life, with parents calling for him to be replaced as headmaster and now a secret from his past exposed to the public? After he mentioned some secret about Jamie, Karen did some digging and discovered it. She’s the one who shared the story with a reporter, and is also behind a petition to end Peter’s tenure as headmaster, just to prove to him the negative impact Maggie has on his life.

Peter tells Karen to get out. She flirtatiously says she’ll see him Monday.

Meanwhile, Maggie is having a much better evening. Becka ran into Maggie as she left the pub and reluctantly offered to have her stay with her, ordering Jamie to stay with Peter that night. Loosening Maggie up with a bottle of wine, Becka gets her to talk about her feelings, knowing Maggie needs to let loose.

Maggie admits she’s jealous that Peter has helped Jamie through this tragedy and she has never known about it or been able to support him through it. Becka assures Maggie that she alone can make Jamie feel better now.

Roxie’s attempt to get Alex to open up about what’s bothering him is much less successful. When he arrives at Neil and Kelly’s, he’s jittery, and won’t explain why he’s agitated. Finally, he tells Roxie they can talk about it once Josh goes to bed.

But then he decides to frantically rifle through the house in search of the money. Roxie hears him. Frightened, she asks what he’s doing. He explains that Neil and Kelly found his money, and that he’s in trouble and needs it back. Roxie grabs Josh to protect him and tells Alex to leave. He refuses, so she calls Kelly on speakerphone. Alex asks where his money is, and Kelly, crying, says they burnt it. Alex runs out of the house, gets in his car, and speeds away.