When she’s not carefully composing plates at Elizabeth Restaurant, Chef Iliana Regan is foraging for the ingredients.

Iliana Regan’s earliest memory of cooking is preparing mushrooms she foraged with her family in rural Indiana, where she grew up.

“I would go foraging with my dad in the woods by Jasper Pulaski Park,” she recalls. “That’s just what we did.”

Today Regan is putting her foraging skills to work at her restaurant, Elizabeth, in the Lincoln Square neighborhood of Chicago.

“The concept is locally farmed, gathered, and sourced cuisine,” Regan says. She calls it “New Gatherer cuisine,” a nod to the gathering of ingredients and the gathering that people do around a dinner table. At her Michelin-starred restaurant, diners gather over a rotating tasting menu that features ingredients Regan grew in her own small garden, or foraged at parks in the Midwest. Regan also sources products from local farmers, including dairy from Kilgus Farmstead, squash from Nichols Farm, meat from Slagel Family Farms, and pears and apples from Seedling Farms. In the spring, summer, and fall, she and her staff pickle, preserve, and can food, so they can use ingredients like peppers or blackberries throughout the winter. The result is a menu that Regan says, “highlights how abundant we are in the Midwest.”

Some dishes use ingredients with which diners are familiar but have never had a chance to eat, like a bear rice crispy, a savory take on a Rice Krispie treat, made with puffed wild rice and a thin sliver of cured bear leg. Then there are ingredients many diners have never heard of, like pin cherries, a tiny fruit with a large seed that Regan makes into a sauce served with milkweed pods.

I just cook what I know and what I love to cook, and that’s why I do it.

Ingredients like bear, raccoon, or squirrel (which Regan says “tastes like tough chicken”) may conjure images of casual, homey dishes, but Elizabeth’s presentations and execution are as meticulous and artful as those on any tasting menu in Chicago, thanks in part to Regan’s stint at the highly-acclaimed fine-dining restaurant Alinea. After working at Alinea, she went on to run her own food business, One Sister, and sold pierogi at famers markets and held underground dinners in her apartment.

In 2012, Regan opened Elizabeth, which she named for her late sister, who had an important impact on her culinary life. She hopes her current endeavor will help expand Chicagoans’ palates.

“I like the idea that I can go and get things that are interesting and different and present them to people,” Regan says, noting that at her summer dinners, people didn’t know they could eat milkweed pods. But she’s known about these kinds of ingredients from a young age. “I just cook what I know and what I love to cook, and that’s why I do it.” 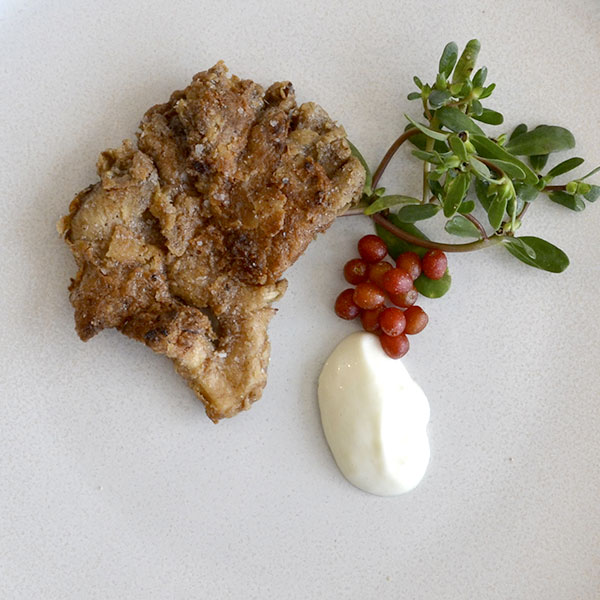 Note: This is part of a tasting menu.

Roast garlic in foil for 1 hour in a preheated 350-degree F oven and then peel out cloves. Add garlic to a food processor with lemon juice, water, egg yolks and salt. Turn on food processor and then slowly drip in canola oil with a squeeze bottle until it is consistency of mayonnaise. Adjust seasoning if necessary and reserve refrigerated until needed, up to 5 days.