Going With the Grain

Going With the Grain

Baker Miller is keeping a close eye on its wheat, as the grain makes its journey from the farm, to the mill, to the pastries, to your mouth.

“We’re getting people to think about it as food again, and not as a product that just sits on your shelf for years,” Dave says.

At Baker Miller Bakery & Millhouse, they aren’t just serving pies, grits and oatmeal; they’re actually sourcing and grinding the grains that go into these dishes.

The Millers weren’t always interested in flour. They started with a food truck in 2011, which later became the popular Logan Square bakery Bang Bang Pie Shop.

Is there a way to use a better ingredient? We did that with meat, we did that with fruits and vegetables. I started to wonder why nobody talks about flour.

While at Bang Bang, Dave says they would ask themselves, “Is there a way to use a better ingredient? We did that with meat, we did that with fruits and vegetables. I started to wonder why nobody talks about flour.” Dave started reading science journals and realized that there was indeed a way to use organic, non-GMO, whole grains. He’d just have to source and mill it himself.

So the Millers struck out on their own, and in the fall of 2014 they opened Baker Miller in Lincoln Square, where Megan handles baking for breakfast and lunch, and a few doors down, Dave does the milling. He sources wheat, corn and oats from three farms: one in Illinois, one in Wisconsin, and a co-op in Montana. In addition to milling for the restaurant, Baker Miller also packages flour, oatmeal and grits to sell retail to customers, and bulk flour to sell to area restaurants. Dave is also talking with Whole Foods and other large accounts about placing his products in stores. 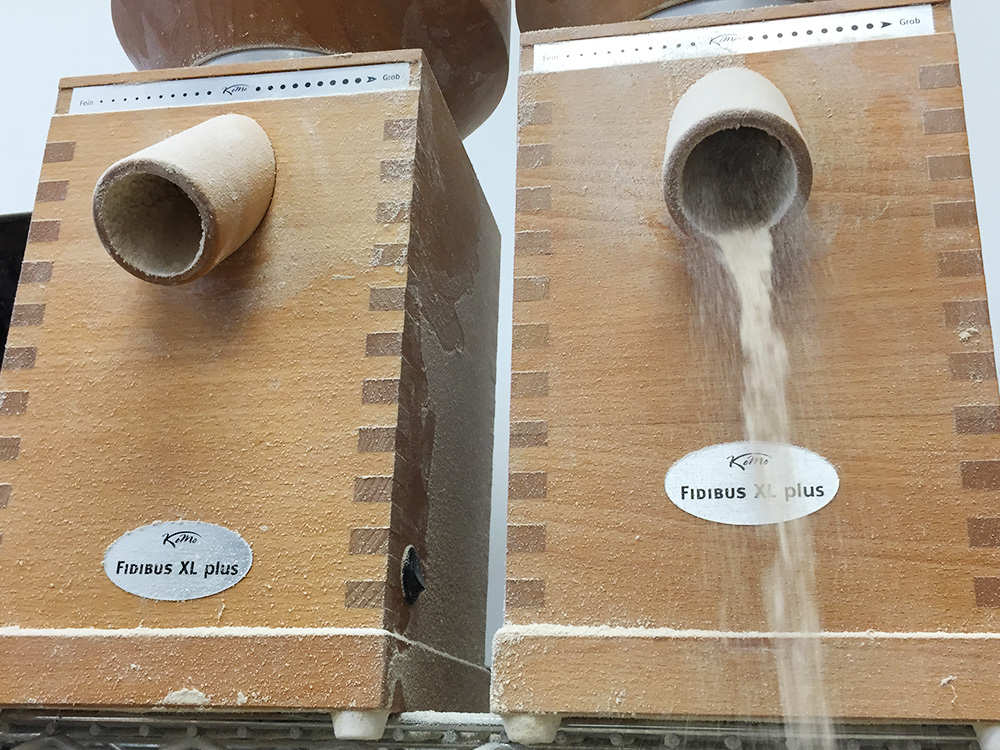 Dave mills whole wheat flour, which includes the bran and the germ, rather than white flour. Whole grains “actually respond based on how you touch them,” he says. “White flour doesn’t really do that. It does what you want it to do every time… but one batch of wheat is going to taste different from another batch of wheat.”

Because his products can be somewhat finicky, Dave uses the restaurant as a test kitchen. Since each batch of grain varies depending on when and where it was grown, the grains respond differently when used in a recipe. That means, for example, that one batch of flour could require more water than another batch. It’s a constant testing process, and the Millers pass their knowledge along to their customers, so they know how to use these grains at home.

“When you just see a dry product on a shelf you don’t really get the full picture,” he says. “We use the restaurant to make sure the products work because we test them every day.”

And the customers are showing interest in more than just Baker Miller’s gooey cinnamon buns.

“People want to actually see the [milling] process,” he says. “I think that that’s what people are coming to us for. They want to see it and then they want to taste it, and that’s where the restaurant comes into play. I constantly bring people here and show them what we’re doing.”